On the sixth anniversary of his signing of the Affordable Care Act, President Barack Obama took a victory lap on Medium.

In a brief article punctuated by several celebratory photographs, Obama wrote, "20 million. That’s how many people now have the health coverage they need thanks to the president’s health care law. In fact, for the first time ever, more than 90 percent of Americans have health coverage, putting the U.S. rate of uninsured Americans at 8.8 percent."

When we began to check the percentage of uninsured Americans, we found some discrepancies. After we told the White House about our concerns -- but before we were able to publish our fact-check -- the White House made a change to the text of the Medium post and noted that a correction had been made. The White House confirmed that it had changed the language after our inquiries.

We’ll address the White House’s correction and change in this fact-check, but our policy is to fact-check the way a claim was phrased originally.

The confusion generated by this case stems from the reality that there are several different measurements of uninsured Americans, each with their own benefits and drawbacks. (The Kaiser Family Foundation has assembled a helpful cheat sheet to sort through the various measurements.)

The gold standard of measurements is considered to be the data collected by the U.S. Census Bureau. However, the bureau only publishes its uninsured number once a year, and the figure released most recently -- 10.4 percent uninsured for calendar year 2014 -- is out of date. Here’s the summary of the Census Bureau’s most recent data.

A more frequently updated yardstick -- released every quarter -- is Gallup-Healthways Well-Being Index. The most recent number from Gallup, for the fourth quarter of 2015, shows the uninsured rate at 11.9 percent. That’s higher than what Obama cited in his Medium post, but Gallup’s figure is always a bit higher than other numbers because it only surveys adults. On average, adults are somewhat more likely to be uninsured than children. Here’s what Gallup’s recent trend line looks like. 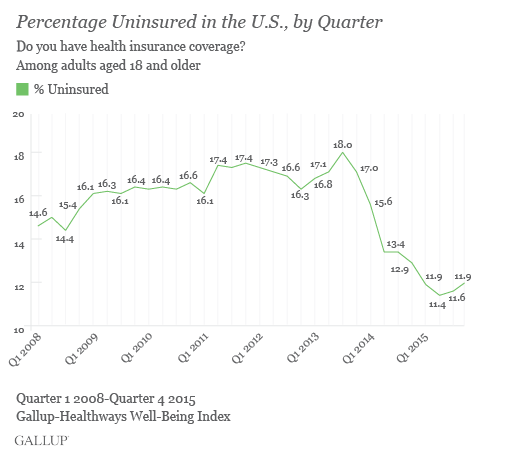 When we asked health policy experts if they could think of what Obama might have been pointing to, they suggested the Centers for Disease Control and Prevention's National Health Interview Survey. The most recent data from this survey covers the first three quarters of 2015, making it the most recent large-scale federal source for data on the uninsured.

Using this survey, Obama came pretty close: The uninsured rate through September 2015 was 9.1 percent, and as the chart below shows, this came after consistent declines in the uninsured rate since 2010, the year the Affordable Care Act was signed. 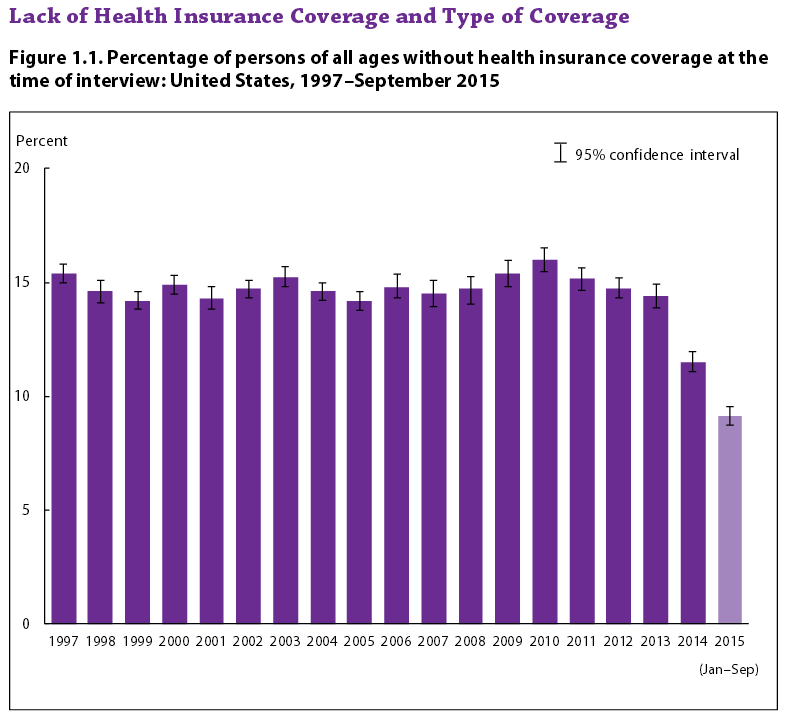 Still, the White House specified an uninsured rate of 8.8 percent. So where did that come from?

To get there, the White House relied on Department of Health and Human Services projections of the uninsured rate through the first quarter of 2016 -- two quarters beyond the last hard data from the National Health Insurance Survey. Here’s a graphic from the Council of Economic Advisers illustrating what the White House did:

What the White House did in this slide is a "reasonable approach," said Edwin Park, vice president for health policy at the liberal Center on Budget and Policy Priorities.

Still, the problem with the wording in the Medium post is that the White House didn’t acknowledge that it was using a projection -- it used the present tense, suggesting it was citing current, validated data.

"In the end, I don’t think a difference of 0.3 percent matters that much -- the 9.1 percent figure is an impressive achievement in and of itself," said Jonathan Oberlander, chair of the department of social medicine at the University of North Carolina-Chapel Hill. "But it would have been better for them to say something like the uninsured rate in September 2015 stood at 9.1 percent and they project that it has since fallen to 8.8 percent."

The actual numbers are "impressive on their own," she said. "There was no need to gild the lily."

After our inquiry, the White House changed the 8.8 percent projection to the 9.1 percent figure offered by the CDC survey and noted the change with a correction.

Obama, in his Medium post, said the "rate of uninsured Americans (is) 8.8 percent."

Hats off to the White House for correcting its post based on our inquiry, even before we could publish our fact-check. Still, we put claims to the Truth-O-Meter based on their original form, and in this case, Obama, despite being close to accurate, jumped the gun by shaving off a few tenths of a percentage point before they officially materialized. We rate this claim Half True.

Email interview with Jonathan Oberlander, chair of the department of social medicine at the University of North Carolina-Chapel Hill, April 4, 2016

Email interview with Edwin Park, vice president for health policy at the Center on Budget and Policy Priorities, April 4, 2016