Tom Price
stated on March 28, 2016 in a post on Medium:
Says the Congressional Budget Office "is expecting a protracted economic malaise for at least the next decade under current policies."

Is the U.S. economy headed into the toilet if nothing is done to change course? Georgia Republican Rep. Tom Price, the chairman of the House Budget Committee, said as much when he released his committee’s 2017 budget resolution, which he also posted on Medium.

At one point, Price and the committee wrote, "The nonpartisan Congressional Budget Office (CBO) projects economic growth over the next decade to average just 2.1 percent — a drop off of roughly one-third from the long-term historical average of about 3.0 percent growth. In other words, CBO is expecting a protracted economic malaise for at least the next decade under current policies."

For this state of affairs, the resolution blames "the current administration’s insistence on higher taxes, burdensome regulations, restrictions on the production of affordable, American-made energy, and a preference for crony capitalism over free markets is exactly the recipe for economic turmoil many predicted."

We wondered whether Price was accurately quoting the CBO, so we looked at the original document. It turns out that he repeated CBO’s glass-half-empty comments while glossing over the agency’s alternate, glass-half-full interpretation.

The CBO estimate comes from "The Budget and Economic Outlook: 2016 to 2026," released in January 2016. The number in question refers to inflation-adjusted "potential output," which is CBO’s best guess at the maximum growth the economy can achieve without triggering significant inflation.

CBO projected 2.1 percent average annual growth between 2021 and 2026. (This is not the full decade, as the resolution indicates. However, the actual decade-long projection -- for the period 2016 to 2026 -- was even lower, at 1.9 percent, so we won’t quibble.) Here’s the full chart CBO provided. 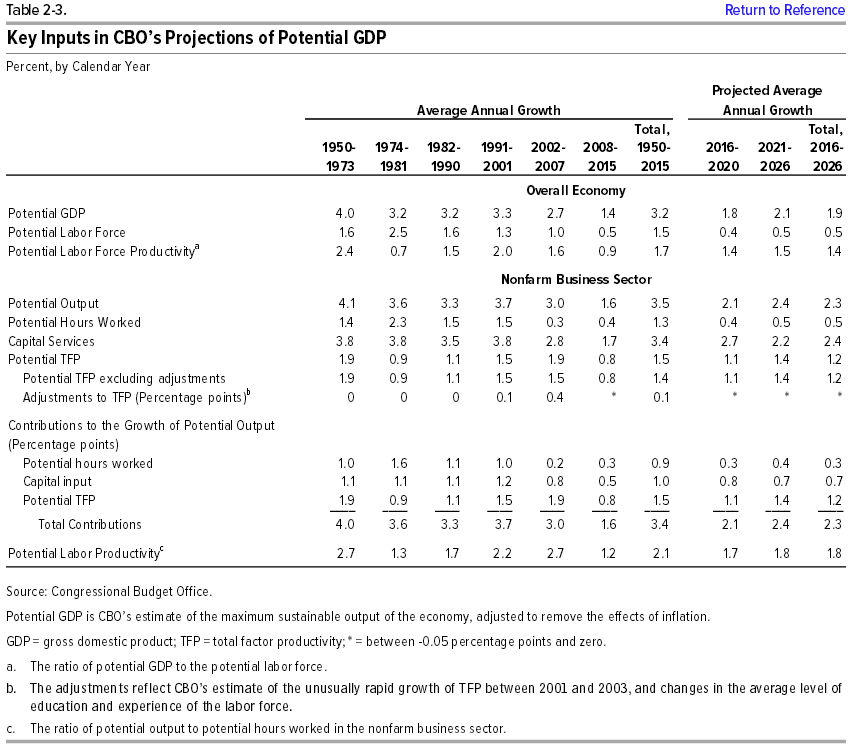 Beyond the numbers, CBO’s analysts offered both a darker interpretation and a rosier one.

The darker interpretation was that 2.1 percent is low compared to long-term pattern of roughly 3 percent. The 2.1 percent figure "represents a significant slowdown" from the comparable growth rates that were achieved between 1981 and 2007," which was 3.1 percent, CBO wrote.

But CBO also had a rosier interpretation -- that 2.1 percent "is substantially faster" than what has occurred since the end of 2007, which was 1.4 percent. The end of 2007 marked the start of the last recession.

The House resolution also avoids mentioning a common belief among economists, which is that the United States is unlikely to see the rapid growth it experienced during the first few decades after World War II, when the country had fewer international competitors.

For instance, when former 2016 Republican presidential candidate Jeb Bush laid out a goal for 4 percent growth, he faced skepticism.

It’s also worth noting that calling growth rates around 2 percent "protracted economic malaise" would rope in quite a few Republican presidents.

"Calling 2.1 percent growth ‘economic malaise’ is a bit strong given our demographics," Sinclair said. "It is frustrating that we never saw a bounce back of a recovery after the Great Recession to regain the lost output from that period, but at this point looking forward we wouldn't expect one now."

When we contacted Price’s office, they stood by their characterization of CBO’s analysis and said that "economic growth projected to be one-third below the historical average is both cause for concern and emblematic of a poor-performing economy. … It is still underperforming, whether for a short while or long while."

Price, in the resolution his committee produced, wrote that the Congressional Budget Office "is expecting a protracted economic malaise for at least the next decade under current policies."

Even granting Price some leeway for his use of the subjective term "protracted economic malaise," he cherry-picks what CBO wrote, offering its negative interpretation without acknowledging its positive interpretation. The statement is partially accurate but leaves out important details, so we rate it Half True.