Donald Trump
stated on April 27, 2016 in a foreign policy speech in Washington:
"When President Obama landed in Cuba on Air Force One, no leader was there, nobody, to greet him -- perhaps an incident without precedent in the long and prestigious history of Air Force One."

Republican presidential candidate Donald Trump said President Barack Obama had been disrespected during his recent trip to Cuba -- the first visit by a sitting president since 1928, as well as a landmark step in the evolving relationship between bitter Cold War enemies.

"Our rivals no longer respect us," Trump said during a major foreign policy speech on April 27, 2016. "In fact, they're just as confused as our allies, but in an even bigger problem is they don't take us seriously anymore. The truth is they don't respect us. When President Obama landed in Cuba on Air Force One, no leader was there, nobody, to greet him -- perhaps an incident without precedent in the long and prestigious history of Air Force One."

This was not the first time Trump had raised this concern. He sent this tweet the same day Obama landed in Cuba: 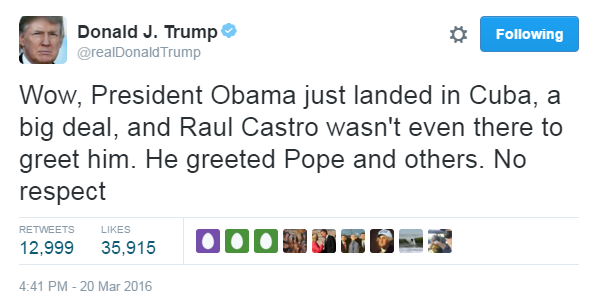 Is Trump right that this is an unprecedented snub? After checking with diplomatic and presidential historians, we found that Trump has a point, but his claim is far from airtight.

Airport greetings aren’t only from heads of state

On March 20 at José Martí International Airport near Havana, the president was "greeted by a delegation of American and Cuban officials, including … Bruno Rodríguez Parrilla, the Cuban foreign minister," the New York Times reported.

Trump has "a legitimate point," said Paul Kengor, a biographer of Ronald Reagan. "It did make Obama look bad, especially given that the Castro brothers should be enormously grateful" that an American president would agree to start warming relations between the two countries.

That said, Trump’s wording in his speech -- that "no leader was there, nobody, to greet him" -- wasn’t really accurate. Bruno Rodríguez Parrilla, the foreign minister, is a high-ranking official in the Cuban government. So is Cuban Ambassador to the U.S. Jose Cabanas, who was also there.

Indeed, the White House said at the time said that it was never envisioned that one of the Castros would come to the airport to greet Air Force One.

"The White House says it's taking no offense that Cuban President Raul Castro didn't greet President Barack Obama upon arrival in Havana," the Associated Press reported. "Ben Rhodes, Obama's deputy national security adviser, says it was ‘never contemplated or discussed’ that Castro would be at the airport. He said the Cubans consider Monday morning's ceremony with Obama and Castro to be the official welcome event."

White House spokesman Ned Price told PolitiFact that there is "not a standard recipe" for how protocol of this sort is handled. "If the official arrival ceremony is separate from the airport arrival, as was the case in Cuba, it's certainly not atypical for someone other than the head of state to greet Air Force One," Price said.

Nick Cullather, a diplomatic historian at Indiana University, said he doubted any snub was felt when Obama recently traveled to the United Kingdom and was met at Stansted Airport by Essex Lord Lieutenant Lord John Petre, a designee of Queen Elizabeth II.

And lots of factors can play a role in who comes out to greet the president, said Alan K. Henrikson, a diplomatic historian at Tufts University’s Fletcher School of Law and Diplomacy.

"The time of day can be important, depending in part on the itinerary and destination," he said, "If the president is traveling to several places on one trip, he might be arriving at an odd hour, late in the evening or early in the morning. … There are regional and cultural, as well as constitutional, variations."

And the fact that there were no recent visits to Cuba may have made protocol more malleable.

"There's no precedent for Air Force One landing in Cuba," said Price of the White House. "The fact that the president was welcomed with an official arrival ceremony, an unprecedented press conference, and full state dinner, among other elements, speaks to the level of respect the president was afforded."

There’s at least one precedent: When Nixon went to China

There is no single online clearinghouse that tracks presidential overseas arrivals, and we couldn’t find an expert who was familiar with all such historical events.

However, we did find one case that serves as a precedent: President Richard Nixon’s first trip to China in 1972.

Like Obama’s trip to Cuba, Nixon’s journey marked the first time an American president had visited a longstanding enemy in several decades. Both nations were communist countries, with the founding leader still alive at the time. Both were highly anticipated media events. So how was the China arrival handled?

It was Chinese Foreign Minister Zhou Enlai -- not Mao Zedong, China’s top leader -- who greeted Nixon at the base of the steps from Air Force One. Here’s the official White House photograph by Byron Schumaker. 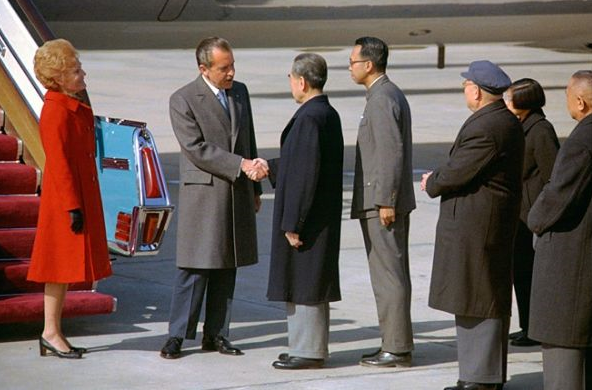 Winston Lord, the special assistant to Nixon’s National Security Advisor, Henry Kissinger, was instrumental in planning the trip. He shared recollections of the visit with a diplomatic oral history project, describing the arrival ceremony as disappointing.

"I remember that when we landed at Beijing Airport, maybe naively I was somewhat disappointed at what I considered the strained nature of the Chinese reception. We had expected thousands of people in cheering crowds after 22 years of hostilities. There was a very small crowd, including a Chinese Army honor guard. Looking out the window at the welcoming ceremony, I thought that it was a fairly grey day, too. This didn’t look like a monumental event, as it ought to have been.

"Of course, everyone was wondering how the first encounter would go between the President and Zhou Enlai, who was at the airport to meet him. They all remembered that Secretary of State John Foster Dulles had snubbed Zhou Enlai in Geneva in the 1950s when he refused to shake his hand. That initial handshake this time was clearly going to be important. Nixon left the plane, walked down the steps, and went over and shook Zhou En-lai’s hand. This was a famous photograph. ... Then there was a restrained reception at the airport, with the band playing, the national anthems, review of the honor guard, and so on. There were not many people there. The reception was very cool."

Trump said, "When President Obama landed in Cuba on Air Force One, no leader was there, nobody, to greet him -- perhaps an incident without precedent in the long and prestigious history of Air Force One."

While there appears to be some variation in protocol for presidential arrivals, it’s credible to view the absence of one of the Castro brothers at the airport as something of a snub, particularly since Raul Castro had met two visiting religious leaders there just months earlier.

However, Trump exaggerates here when he says "no leader was there, nobody, to greet him," since Cuba’s foreign minister and other high government officials were present. And there is at least one "precedent" for the foreign minister greeting a visiting president -- Nixon’s trip to China in 1972, which is actually a pretty good comparison for the type of trip Obama was making. We rate the statement Half True.