Donald Trump
stated on August 15, 2016 in a speech on foreign policy in Youngstown, Ohio:
"I had previously said that NATO was obsolete because it failed to deal adequately with terrorism. Since my comments, they have changed their policy and now have a new division focused on terror threats."

During what his campaign billed as a major foreign-policy address in Youngstown, Ohio, Donald Trump seemed to take credit for pushing NATO toward a sharper focus on terrorism.

"If I become president, the era of nation-building will be brought to a very swift and decisive end," Trump said. "Our new approach -- which must be shared by both parties in America, by our allies overseas and by our friends in the Middle East -- must be to halt the spread of radical Islam. All actions should be oriented around this goal and any country which shares this goal will be our ally."

He went on to add, "We will also work very closely with NATO on this new mission. I had previously said that NATO was obsolete because it failed to deal adequately with terrorism. Since my comments, they have changed their policy and now have a new division focused on terror threats."

Trump has indeed mused publicly that NATO might be "obsolete" because the alliance is "not meant for terrorism." But we wondered whether he was correct to say that the U.S.-led military alliance has "changed their policy and now (has) a new division focused on terror threats."

As it turns out, we found very little accurate with this statement.

What change at NATO is he referring to?

We didn’t hear back from Trump’s campaign, and unlike other portions of the prepared speech, this particular claim was not documented with footnotes.

However, when we checked with experts on NATO and terrorism, several said the likeliest change that Trump would have been referring to was the creation of an assistant secretary general for intelligence and security to head a newly established Joint Intelligence and Security Division.

Trump has previously tweeted out a Wall Street Journal story on the news and said the alliance "made the change without giving me credit." 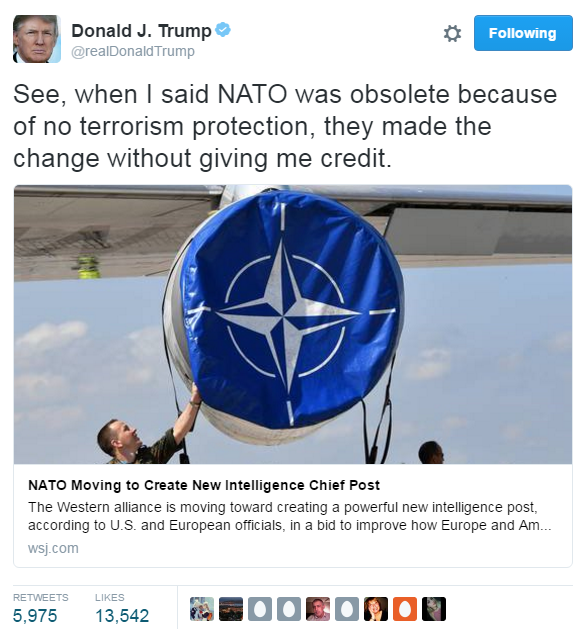 The new position was officially announced in a communiqué released on July 9, 2016, by member-state representatives at a summit in Warsaw, Poland. Here’s what the document said:

Was this a major change?

"NATO members have been complaining about sharing of intelligence for generations," said Stephen M. Saideman, a professor of international affairs at Carleton University in Canada who had a fellowship on the U.S. Joint Staff at NATO in 2001. "Every year or two, there is a discussion about how to improve intel sharing." This change, he said, was "not that important."

Jorge Benitez, director of NATOSource at the Atlantic Council, agreed. "While the top position is new, it seems most of the staff will come from an internal reorganization of NATO bureaucracy, rather than new additions," he said. "This is because the summit communique describes this new NATO division as making ‘better use of existing personnel and resources.’ "

More to the point, Trump’s comment gives the impression that NATO hadn’t been responsive to terrorism until the new division was created. That’s not true at all.

NATO involvement in counter-terrorism issued its first formal declaration on terrorism in 1980, and it became a significant issue for the alliance on Sept. 11, 2001, said Lisa Sawyer Samp, a senior fellow in the international security program of the Center for Strategic and International Studies.

"NATO invoked Article 5, its collective defense provision, the day after the 9/11 attacks and has focused on dealing with this threat ever since, including most importantly by deploying troops for the past 12 years in Afghanistan," said Ivo H. Daalder, president of the Chicago Council on Global Affairs who previously served as Ambassador to NATO under President Barack Obama.

At its peak, NATO and its partners sent about 40,000 troops to Afghanistan, Benitez said, and this year, there are still about 4,000 troops from NATO allies in Afghanistan.

"It is impossible to argue that NATO has not played an overwhelmingly important role in the war on terror," said Timothy Andrews Sayle, an assistant professor of modern global security at the University of Toronto.

It’s worth noting that, according to experts, NATO’s structure and role has made it an imperfect vehicle for counter-terrorism. "Allied warfare is exceptionally difficult and fraught with problems of coordination and compatibility," Sayle said. Intelligence sharing has been especially challenging -- a shortcoming that the new position was designed to ease.

NATO’s post-9/11 terrorism blueprint did undergo one major overhaul -- but that occurred in 2012, several years before Trump started running for president. The overhaul, as announced at a summit in Wales, states that "the Alliance strives at all times to remain aware of the evolving threat from terrorism; to ensure it has adequate capabilities to prevent, protect against, and respond to terrorist threats."

"So it took about a decade to update the initial post-9/11 framework for dealing with terrorism," said Matthew Fay, a defense policy analyst with the Niskanen Center.

Did Trump have anything to do with it?

Despite Trump’s desire for credit, this is the part where his statement goes off the rails. Trump strongly implies that NATO acted because of his concerns. But experts agree that nothing of the sort happened.

For starters, experts said, leaders of the NATO countries feel little warmth for Trump, suggesting that they wouldn’t do anything to bolster his prospects of becoming president.

"It is comical to suggest NATO would change its counterterrorism policy in response to anything Donald Trump has said about it over the course of his campaign," Fay said. "Like his claim that he was against the invasion of Iraq, this is another reflection of the Republican nominee living in a foreign policy world of his own creation."

Even more important are the structural obstacles -- namely, that an alliance as broad as NATO tends to take longer to get all its members to sign off on strategic changes.

"This is almost certainly just an odd coincidence," Sayle said. "The position would be the result of a very long slog by those who have favored the idea against those who may believe the alliance too large and diffuse to be effective – or safe – for sharing detailed intelligence."

Saideman agreed. "NATO never works fast on anything, and most of the major changes are timed to be announced at summits like the Warsaw Summit or smaller meetings where defense ministers and foreign ministers meet."

Finally, NATO rejected the notion that Trump had anything to do with the change in a statement to Politico.

Trump said, "I had previously said that NATO was obsolete because it failed to deal adequately with terrorism. Since my comments, they have changed their policy and now have a new division focused on terror threats."

The change he’s apparently referring to -- the creation of a new senior post and division for coordinating intelligence sharing -- is just the most recent incremental change in how the alliance handles counter-terrorism, a topic it has addressed, in big ways and small, for more than 30 years. There is no evidence that the change was made in response to Trump’s complaints about the alliance. Experts said such changes typically require a longer gestation period so that all member nations can get on board. We rate Trump’s statement False.

PolitiFact, "Trying to pin down what Donald Trump thinks about abortion, the minimum wage, taxes, and U.S. debt," May 11, 2016

Email interview with Lisa Sawyer Samp, senior fellow in the international security program of the Center for Strategic and International Studies, Aug. 15, 2016

Email interview with Jorge Benitez, director of NATOSource at the Atlantic Council, Aug. 15, 2016

Email interview with Stephen Sestanovich, senior fellow for Russian and Eurasian Studies at the Council on Foreign Relations, Aug. 16, 2016