Tim Kaine
stated on August 16, 2016 in a campaign event:
"In Congress right now, we're doing the best job we have ever done in women in the federal legislature," but it’s still only "19 percent."

Hillary Clinton is running to become the first female president in American history. But even as she makes her potentially historic run, the number of women in Congress remains far from parity with men, said Democratic vice presidential candidate Tim Kaine.

"In Congress right now, we're doing the best job we have ever done in women in the Federal legislature, 19 percent," said Kaine, a U.S. senator from Virginia. "That's the best job we've ever done. Hold on for this, folks: Nineteen percent ranks the United States 75th in the world, below the global average. Iraq is 26 percent. Afghanistan, 28 percent. Number one? Rwanda, 64 percent."

We wondered if Kaine is correct that "in Congress right now, we're doing the best job we have ever done in women in the federal legislature," but it’s still only "19 percent."

Is 19 percent the highest in United States history?

As it turns out, Kaine is correct on that point, too, as the following chart from the Congressional Research Service shows. 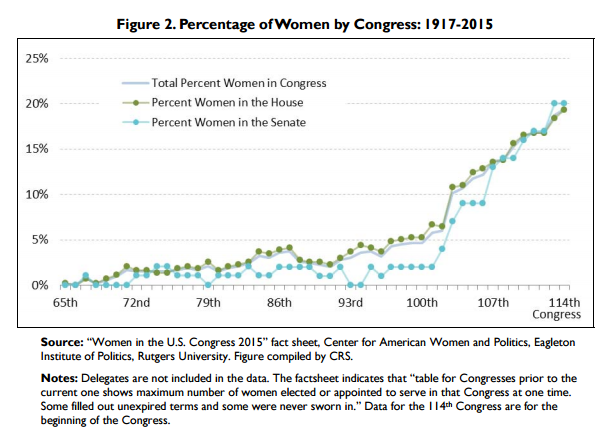 "It's pretty straightforward," said Debbie Walsh, director of the Center for American Women and Politics at Rutgers University’s Eagleton Institute of Politics. "It's a record high, but it's quite low."

If anything, Kaine underplayed the United States’ deficit compared to the rest of the world. The U.S. rank has bounced around a bit over the past year, but it places 96th in the most recent Inter-Parliamentary Union rankings, among 191 countries for which there is data. That’s even worse than the 75th-place finish Kaine cited.

By comparison, the other countries Kaine mentioned did better, though hardly close to male-female parity. Iraq had 27 percent female legislators (58th in the most recent rankings), Afghanistan had 29 percent (ranking 50th) and Rwanda was indeed No. 1 in the world with 64 percent.

Kaine said, "In Congress right now, we're doing the best job we have ever done in women in the federal legislature," but it’s still only "19 percent." He’s right that the current figure for the United States is 19 percent, and he’s right that that’s a record high. We rate the statement True.

Email interview with Debbie Walsh, director of the Center for American Women and Politics at Rutgers University’s Eagleton Institute of Politics, Aug. 22, 2016