Donald Trump
stated on January 10, 2016 in an interview with NBC's "Meet the Press" in Ottumwa, Iowa:
"We get practically nothing compared to the cost of" keeping U.S. military forces in South Korea.

Republican presidential candidate Donald Trump is saying it’s time for South Korea to pick up more of the costs of having United States military forces in South Korea.

During an extended interview with NBC’s Meet the Press from Ottumwa, Iowa, Trump addressed the situation on the Korean peninsula, where North Korea re-emerged in the news in recent days with the purported test of a hydrogen bomb by the regime of Kim Jong Un.

"We have 28,000 soldiers on the line in South Korea between the madman and them," Trump said, referring to Kim. "We get practically nothing compared to the cost of this."

This is not the first time Trump has used this talking point. In 2011, we checked this claim about South Korea: "We have 25,000 soldiers over there protecting them. They don't pay us. Why don't they pay us?"

We rated the claim that South Korea doesn't pay False, noting that South Korea had picked up the tab for nearly $700 million in the most recent year for personnel, logistics and construction costs.

On Meet the Press, Trump made a slightly less absolute statement. Rather than saying, "They don't pay us," he said, "We get practically nothing compared to the cost." So we took another look at this assertion. 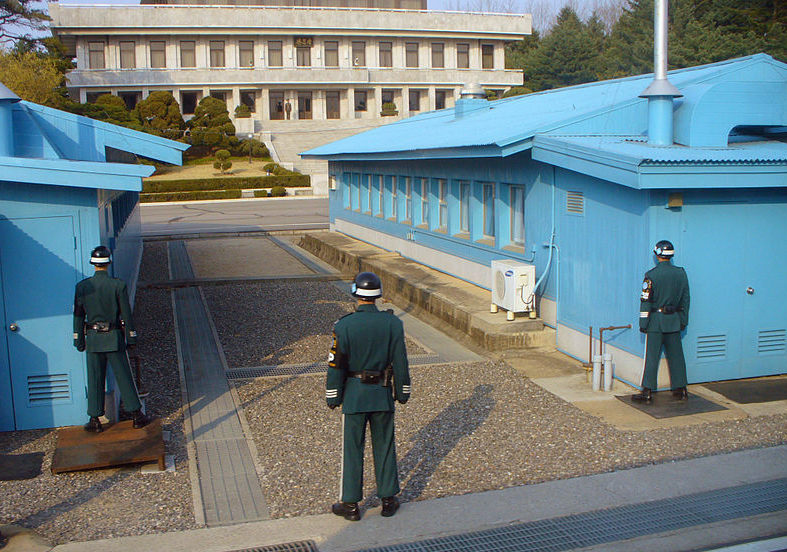 In fact, South Korea pays quite a bit more than they did in 2011.

In the most recent agreement, announced in early 2014, South Korea said it would pay $866.6 million that year to support the U.S. presence. That was 5.8 percent higher than the 2013 amount, and that could grow by as much as 4 percent annually through 2018.

So is this "practically nothing compared to the cost" of a U.S. military presence, as Trump argues?

Calculating the South Korean financial burden on a percentage basis is tricky, because it’s difficult to determine how much it "costs" the United States to station military personnel in South Korea. Do you include the annual salaries and benefits for the troops in question, or do you also include their equipment and past training?

If you look at the most straightforward amount -- salary and benefits for 28,500 troops, which according to experts is roughly $100,000 a head -- then South Korea’s payments account for slightly more than 30 percent of U.S. costs in 2014.

"It's hard to argue that more than $800 million annually is ‘peanuts’ or ‘next to nothing,’ " said Lance Janda, a military historian at Cameron University.

Beyond that, several experts said Trump’s apparent premise -- that the United States is giving a growing, affluent country what amounts to a charitable gift -- is wrong. The United States itself benefits from the military investment in South Korea, they said.

"U.S. forces are no longer there strictly to defend South Korea," said William W. Stueck, historian at the University of Georgia. "They are there to enhance regional stability as well. The point is that we have vital interests in East Asia and the Western Pacific, so why shouldn't we pay part of the bill for our force presence?"

Janda concurred: "The traditional argument for keeping troops in South Korea is that it deters North Korea from attacking South Korea, stabilizes the region politically, socially, and economically, and gives the United States bases from which it can project military power throughout the western Pacific. In addition, he said, the military expense helps protect countries that buy U.S. products, he said.

Allan R. Millett, a historian and director of the Eisenhower Center for American Studies at the National World War II Museum in New Orleans, agreed. "Alliances are not to be measured in dollars, but in their effectiveness at deterring conflict," he said.

It’s also worth pointing out that South Korea’s willingness to share the costs means that it’s cheaper for U.S. military to support those 28,500 troops, compared to having them stationed elsewhere, even at bases in the United States.

Reasonable people can disagree, Janda said, about whether South Korea is paying "enough," and whether the United States might be better off protecting South Korea with air and naval power rather than a sizable ground presence. Janda added that it’s possible to argue that the U.S. military presence "is partially destabilizing because it makes the Chinese and North Koreans nervous, and that we are too quick to see the world in purely military terms."

Still, he said, "I don't hear Trump making nuanced arguments like that."

Trump said, "We get practically nothing compared to the cost of" keeping U.S. military forces in South Korea.

Currently, South Korea pays well over $800 million annually to support the United States’ troop presence, an amount that doesn’t qualify as "practically nothing." And while Trump makes it sound like the United States’ willingness to pay the rest of the freight amounts to a gift to South Korea, he overlooks that the United States actually benefits significantly on a strategic level from the arrangement. We rate the claim Mostly False.

Email interview with Lawrence Korb, senior fellow at the Center for American Progress and former assistant secretary of defense for manpower, installations and logistics from 1981-1985, Jan. 10, 2016

Email interview with William W. Stueck, historian at the University of Georgia, Jan. 9, 2016