Jeb Bush
stated on January 4, 2016 in a column posted on Medium:
"As governor of Florida, I used a combination of strategies to help reduce heroin use among youth in Florida by approximately 50 percent."

Addiction is a deeply personal issue for Republican presidential candidate Jeb Bush, whose daughter Noelle suffered from addiction and a string of related criminal charges while he was serving as governor of Florida.

In a Medium post on Jan. 5, 2016, Bush offered a glimpse into "the heartbreak of drug abuse" that his family had experienced, along with policy proposals to better address addiction.

In the column, Bush discussed his record on drug policy during his gubernatorial tenure. "As governor of Florida, I used a combination of strategies to help reduce heroin use among youth in Florida by approximately 50 percent," Bush wrote. Bush took office in January 1999 and left in January 2007.

We took a closer look into that statistic. (A few days later, Bush turned Noelle's story into a television ad.)

The Bush campaign pointed us to the 2006 Florida Youth Substance Abuse Survey conducted by the Florida Department of Children and Families. (Although several surveys of drug use are released on an annual basis, experts told us that this is the only survey that would speak to the specific numerical claim Bush made.) 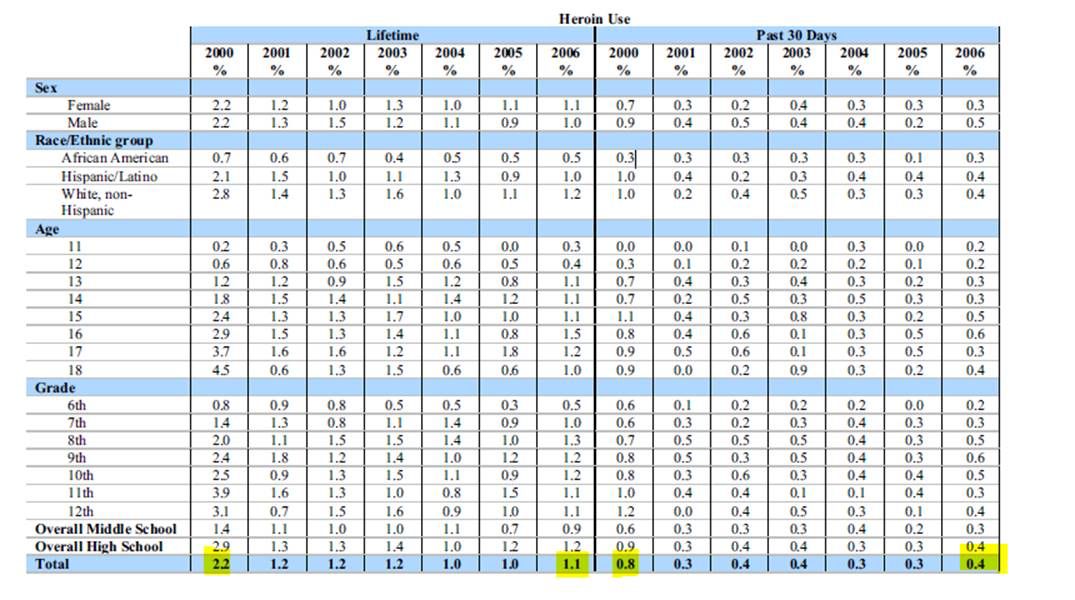 For heroin use, the survey offers two measurements -- heroin use at any time of one’s life, and heroin use during the past 30 days.

So numerically, Bush has a point. Still, experts said it’s worth taking those numbers with a grain of salt.

One concern is that the percentage of youth using heroin is small, meaning the differences from year to year are small -- and this makes them potentially unreliable.

Indeed, the report itself cautions, "Heroin use in a school population is extremely rare. Nationally, no lifetime prevalence rate for heroin has exceeded 2.4 percent in the 8th, 10th or 12th grades in the past decade. … Given the extremely low prevalence rates associated with heroin use by Florida students, analyses that attempt to precisely specify or quantify changes over time are subject to error."

In addition, for both measurements, the biggest drop came between 2000 and 2001, with minimal changes between 2002 and 2006. That seemed curious to Lloyd Johnston, a senior research scientist at the University of Michigan's Institute for Social Research and principal investigator of the Monitoring the Future study, which tracks drug use in the United States.

One possible explanation for that pattern, he said, is that the 2000 survey collected its data in December and January, whereas the 2001 to 2005 surveys conducted their data in April and May of those years.

A further curiosity, Johnston said, is that one would not expect a one-year decline that steep for lifetime heroin use. From year to year, the pool of respondents is mostly the same. In the first year, the survey includes youth who are 11, 12, 13, 14, 15, 16, 17, and 18 years of age. The following year, the 18-year-olds drop out and a new group of 11-year-olds joins, but all the other groups are included again. With such modest changes from year to year in the makeup of the age groups, one would not expect a large change in heroin use over a lifetime from one year to the next, Johnston said.

"That makes the lifetime improvement in 2001 highly implausible," Johnston said, adding that a sizable change in the 30-day-rates would be more plausible.

What was Bush’s role?

That’s hard to say, though drug-policy experts in Florida do praise Bush for his work on the issue.

James Hall, a drug abuse epidemiologist at Nova Southeastern University, said that Bush gave the issue high priority, including the creation of a drug policy office out of his own office to coordinate law enforcement, treatment, education and prevention. The office -- which was later eliminated by Gov. Rick Scott -- made a "very significant contribution" to drug policy in the state, Hall said.

Still, such efforts likely had a "marginal influence" on heroin-use rates, Hall said. Often, broader issues such as demographic and social trends have a bigger impact.

Indeed, it’s worth noting that heroin use among youth was declining nationally during roughly the same period.

Johnston’s own study found that heroin use among youth was declining nationally between 1999 and 2007, the full extent of Bush's term in office. "For the three grades we study (eighth, 10th, and 12th), the combined prevalence of heroin use during the prior 12 months declined from 1.3 percent in 1999 to 0.8 percent in 2007," he said. That’s a drop of about 40 percent -- not far from what the Florida-only survey found.

Bush said that "as governor of Florida, I used a combination of strategies to help reduce heroin use among youth in Florida by approximately 50 percent."

The only statistics that directly address his statement offer numeric support. However, the report in question cautions against drawing broad conclusions for such low-frequency events as youth heroin addiction, and experts thought it curious that the drop essentially happened in the first year, with little change after that. Experts praise Bush for his drug policies, but it’s important to note that broader demographic and social factors -- reflected in falling youth heroin use nationally during that period -- likely made a difference as well.

Email interview with Lloyd Johnston, a senior research scientist at the University of Michigan's Institute for Social Research and principal investigator of the Monitoring the Future study