Jeff Sessions
stated on July 18, 2016 in a speech at the Republican National Convention in Cleveland:
"We have the lowest percentage of Americans actually holding a job in 40 years."

"The fact is, we don’t have enough jobs for the people who are here," Sessions said. "Doesn’t this help to explain why our wages have fallen and why we have the lowest percentage of Americans actually holding a job in 40 years? Our duty as elected officials is to get our people jobs first."

We wondered whether he was right that "we have the lowest percentage of Americans actually holding a job in 40 years."

Taken literally, the correct economic statistic to use for answering this question is the employment-to-population ratio, or EPOP for short. This divides the number of employed Americans by the total civilian noninstitutional population at least 16 years of age.

By this measurement, Sessions isn’t correct. Here’s a chart of the statistic going back to 1948, from the Bureau of Labor Statistics: 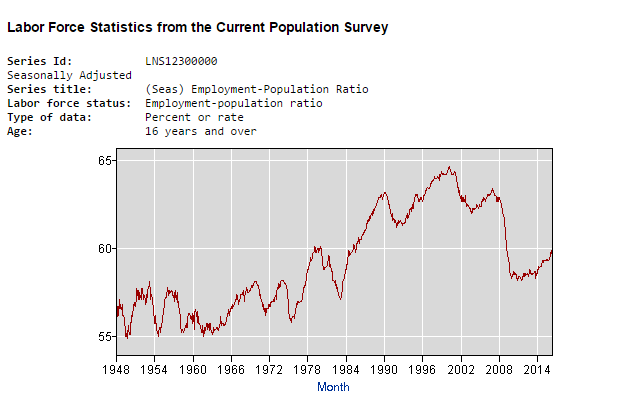 However, the chart shows a few other things worth noting.

First, it indicates that since the end of the Great Recession, the employment-to-population ratio has been climbing, slowly but fairly steadily. After bottoming out at 58.2 percent in 2010 and 2011, the trend line has zigzagged upward. It currently stands at 59.6 percent, or 1.4 percentage points above its low point about five years ago.

Second, Sessions has exaggerated the length of time since the previous low point.

We expect that Sessions was instead referring to a different statistic -- the labor force participation rate -- since that is a common talking point for Republicans. This takes the number of people either working or trying to work and divides it by the total civilian noninstitutional population age 16 and up.

Currently, this number is 62.7 percent. It was last that low in February 1978, which is a bit over 38 years -- close to the 40 years Sessions referred to. Here’s the chart for that statistic: 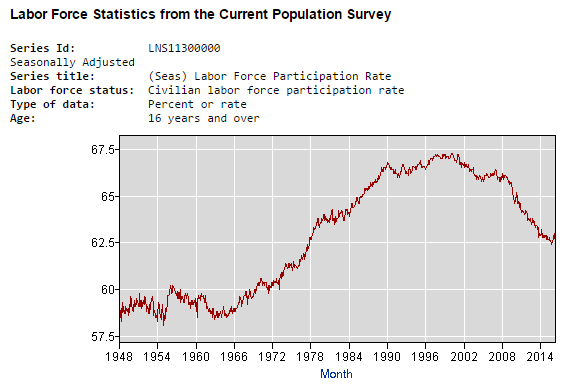 Economists say this measurement captures important aspects of the job market. When the civilian labor force participation rate is low, it’s a concern, because it means there are fewer working Americans to support non-working Americans.

But it’s worth adding some context as well. As we’ve noted before, a notable factor in the decline of the labor-force participation rate is the aging of the Baby Boom generation. As more adults begin moving into retirement age, the percentage of Americans who work is bound to decline.

Still, the recession undoubtedly exacerbated that decline. In a weak job market, some people who might otherwise want a job may return to school, become full-time parents or retire early.

Sessions said, "We have the lowest percentage of Americans actually holding a job in 40 years."

Sessions has worded his statement inartfully. If you use the correct statistic for the way he phrased it, the length of time is somewhat exaggerated and it ignores a recent improvement over the past five years or so.

But if you can look past his looseness with economic terminology, Sessions has a point. Using a related statistic, he’s on target, and the larger issue he’s addressing -- declining rates of work in the population -- is something economists worry about, though much of it has to do with the graying of America.