Donald Trump
stated on July 21, 2016 in the 2016 Republican National Convention:
"America is one of the highest-taxed nations in the world."

GOP presidential nominee Donald Trump looks up at the falling balloons as he stands on the stage with his family and his running mate Indiana Gov. Mike Pence of Indiana after delivering his acceptance speech at the RNC in Cleveland. (AP)

Donald Trump tweaked one of his most repeated falsehoods as he accepted the Republican nomination for president.

On the final night of the Republican National Convention, Trump positioned himself as the fiscally sound counter to rival and presumptive Democratic nominee Hillary Clinton, whom he claimed is proposing a tax hike.

"Middle-income Americans and businesses will experience profound relief, and taxes will be greatly simplified for everyone, I mean everyone," Trump said. "America is one of the highest-taxed nations in the world. Reducing taxes will cause new companies and new jobs to come roaring back into our country. Believe me, it'll happen and it'll happen fast."

This is the fourth time we’ve weighed in on a statement from Trump about America’s tax rate. The difference tonight is the slightly tempered tone. Instead of declaring the United States as having the highest tax rate, he said we’re one of the highest-taxed countries.

Back in May, Trump said, "We’re the highest-taxed nation in the world."

We rated that False because, according to the Pew Research Center last year, America is slightly behind the middle of the pack when it comes to the taxed revenue portion of gross domestic product. 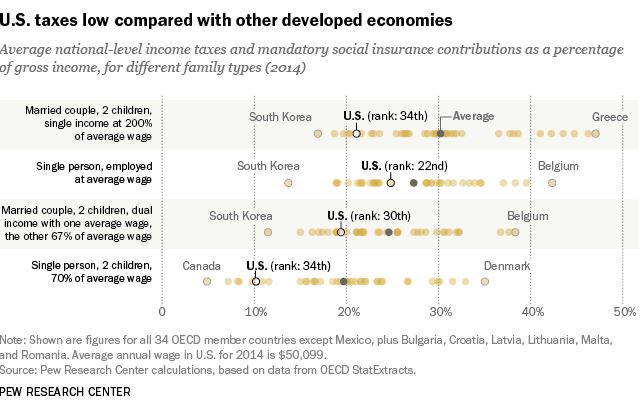 Trump didn’t specify that distinction in his speech, though his tax-rate claim was immediately followed by the business-specific line about reducing taxes that will spur growth of new companies and jobs.

We’ve previously fact-checked a statement about whether the United States has the highest corporate tax rate in the world, and found it pretty accurate.

Of the most advanced and industrialized nations in the world, America ranks third highest for general top marginal corporate income tax rates with a 39.1 percent tax on corporate profits, exceeded by Chad and the United Arab Emirates. So the United States does have a higher corporate tax rate than most of its industrialized peers.

That said, it’s worth remembering that the official tax rates are one thing, while the tax rates corporations actually pay can be substantially less. In practice, U.S. companies pay less because they can claim deductions and exclusions.

Trump teed up his statement by mentioning the tax impact on "middle-income Americans and businesses," which could easily lead listeners to perceive this as a question of overall tax burden, not businesses specifically.

Trump called the United States "one of the highest-taxed nations in the world."

Trump tweaked his language this time in effort to improve his accuracy, saying it’s "one of" the highest taxed nations. If you believe that he meant the corporate tax rate, given the details about companies and jobs that followed the claim, then Trump’s comment is pretty accurate.

However, he didn’t specify that distinction, and a reasonable listener could take away from Trump’s remark that he meant taxes overall, particularly given that he set up the line with a joint reference to middle-income Americans and businesses.