Eric Bolling
stated on November 26, 2016 in a commentary on Fox News:
"President Obama's American Recovery and Reinvestment Act (was) a fancy name for almost a trillion-dollar spending bill. The ARRA was supposed to fix our crumbling roads and bridges," but now, "we have absolutely nothing to show for it."

President Barack Obama will soon hand over the keys to the White House to one of his biggest critics. But the outgoing president’s 2009 stimulus bill -- officially known as the American Recovery and Reinvestment Act -- still drives some of his opponents to distraction.

"President Obama's American Recovery and Reinvestment Act (was) a fancy name for almost a trillion-dollar spending bill," Bolling said. "The ARRA was supposed to fix our crumbling roads and bridges. Remember shovel-ready jobs? Well, guess what: I recall union thug head Richie Trumka laughing, saying, 'I guess those shovel-ready jobs weren't shovel-ready. Ha ha ha.' Not funny, Trumka. That's hard-working Americans handing over their well-deserved, hard-earned money to the government, only to have it wasted on you and your union thug friends. Really, really not funny, Richie. President Obama spent a trillion of your tax dollars and we have absolutely nothing to show for it."

Bolling’s description of the stimulus didn’t match up with what we remembered about the bill, so we decided to take a deeper look. We found Bolling exaggerated several key points about the legislation -- its main purpose was not to fix crumbling roads and bridges.

An effort to contact Bolling through Fox News was unsuccessful.

Some of the law’s shortcomings

In 2009, as the country was reeling from the Great Recession, Obama signed into law a stimulus package that ultimately cost just over $800 billion. (Earlier estimates had been higher, so we won’t quibble with Bolling’s calling it a $1 trillion bill.)

Michael Grabell, a journalist with the investigative project ProPublica, wrote a book, Money Well Spent? The Truth Behind the Trillion-Dollar Stimulus, the Biggest Economic Recovery Plan in History. He concluded in a 2012 op-ed that a lesson of the stimulus is that "government can create jobs — it just doesn’t often do it well."

In addition, some economists, primarily from the center-left, have argued that the infrastructure investment was doomed because it was too small to be effective.

Gary Burtless, an economist at the Brookings Institution, said that the federal expenditures on infrastructure ended up having less of an impact than expected because they were dwarfed by pullbacks in infrastructure spending by states and private companies during the same time span.

"The net effects on employment are hard to determine," Burtless said. Even as stimulus dollars were circulating through the economy, "there was a huge decline in private construction of structures -- homes, apartments, shopping centers, factories, office buildings," along with severe cutbacks in infrastructure projects funded by cash-strapped states.

Meanwhile, many conservative economists blame the stimulus for the relatively weak recovery.

"Usually the debate about whether we have ‘anything to show for it’ has to do with growth and jobs," said Daniel Mitchell of the free-market Cato Institute. "And by both measures, it is very fair to say we got nothing. Indeed, we probably got negative consequences, with an abnormally weak recovery and expansion:"

That said, most of the experts we contacted said that Bolling overstated his case.

The "shovel-ready" aspects of the stimulus tended to attract a disproportionate share of attention. But officially, that was only one of the act’s goals, and if you look closely at how the funds were allocated, only a fraction of the total was ever intended to go to infrastructure.

In his book, Grabell estimated that only about $80 billion, or roughly one-tenth of the act’s spending, was devoted to what people would normally think of as "infrastructure," and of that, only about $27 billion was spent specifically on roads and bridges. So roads and bridges accounted for just over 3 percent of all spending under the act.

So by the numbers, it would be at least as accurate to call the stimulus a tax cut bill as it would be to call it an infrastructure bill. 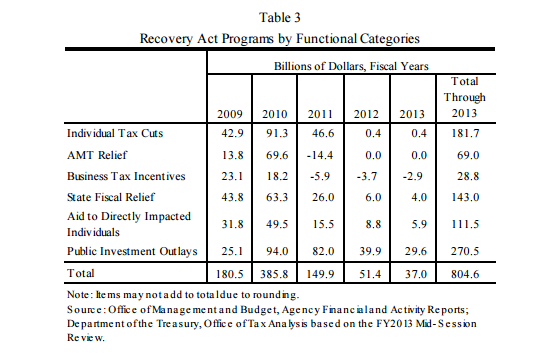 First, while the impact of the tax cuts and individual payments are harder to envision than a highway or a bridge, they were an unsung success of the stimulus, Burtless said.

"The tax cuts, income and payroll, and the increases in government transfer payments largely succeeded in cushioning American households’ net after-tax incomes from the drubbing they would have received in the absence of the stimulus," Burtless said.

In the meantime, the infrastructure spending in the stimulus, despite their shortcomings, did build things.

"If you want to interpret (Bolling’s) statement very narrowly, I’m sure you can find a few infrastructure projects that otherwise would not have taken place," Mitchell said. "But even with this narrow interpretation, keep in mind that the normal test for a positive outcome involves cost-benefit analysis. Dumping a bunch of money into the maws of state and local governments is highly unlikely to generate good results."

Bolling said the stimulus was "a fancy name for almost a trillion-dollar spending bill. The ARRA was supposed to fix our crumbling roads and bridges," but now, "we have absolutely nothing to show for it."

Infrastructure efforts under the stimulus can fairly be critiqued for shortcomings in efficiency and for their relatively modest impact on promoting job growth and reducing the backlog in needed repairs and expansions.

However, Bolling seriously overstates his case. Contrary to what he said, the actual expenditures in the stimulus bill on infrastructure were dwarfed by a combination of tax cuts and safety-net payments. And both these tax cuts and individual payments and the infrastructure projects funded by the bill undermine his assertion that "we have absolutely nothing to show for" the act. We rate his statement Mostly False.