Donald Trump
stated on October 10, 2016 in a rally in Wilkes-Barre, Pa.:
Says Sidney Blumenthal wrote that the Benghazi attack was "almost certainly preventable. Clinton was in charge of the State Department, and it failed to protect U.S. personnel and an American consulate in Libya."

At a Pennsylvania rally the day after the second presidential debate, Donald Trump energized the crowd by reading directly from a recent Wikileaks release of Democratic emails. The topic: the deaths of four Americans in a 2012 attack on a U.S. complex in Benghazi, Libya.

"Here's an interesting one: Sidney Blumenthal," Trump said to boos, referring to a longtime confidant of Bill and Hillary Clinton. Trump, speaking in Wilkes-Barre, Pa., on Oct. 10, continued (at about the 44-minute mark.):

"Do you remember when Ambassador (Chris) Stevens in Benghazi was calling, and writing -- they were desperate for help. They say like 600 times, right? The only one she was speaking to is Sidney Blumenthal, who's a sleaze. He's a sleaze. In fact, Obama wanted her restricted (so) that she couldn't speak (to him). That's probably one of the reasons she wanted to have her private server, you know? Because she promised Obama that she wouldn't be talking to sleazy Sidney.

"So, Blumenthal writes a quote -- this just came out a little while ago. I have to tell you this. (Trump reads from paper.) ‘One important point has been universally acknowledged by the nine previous reports about Benghazi’ -- this is Sidney Blumenthal, the only one she was talking to. ...

" ‘The attack was almost certainly preventable’ -- Benghazi. ‘Clinton was in charge of the State Department, and it failed to protect the United States personnel and an American consulate in Libya’ -- he meant Benghazi. ‘If the GOP wants to raise that as a talking point against her, it is legitimate.’

"In other words, he is now admitting that they could have done something about Benghazi. This just came out a little while ago."

There’s a problem with what Trump said: Blumenthal didn’t write those words.

Following the rally in Wilkes-Barre, Kurt Eichenwald, a Newsweek reporter, wrote an article in which he noted that he had written those words himself.

"Those words sounded really, really familiar," Eichenwald wrote. "Really familiar. Like, so familiar they struck me as something I wrote. Because they were something I wrote." Specifically, an article he wrote from Oct. 21, 2015, titled, "Benghazi Biopsy: A Comprehensive Guide to One of America's Worst Political Outrages."

In general, the article criticized Republicans for politicizing Benghazi. It concludes in part:

"In the end, one thing is clear: This rabid partisanship or unmitigated deception or utter incompetence conflicts with everything this country stands for. Four men died serving their country; it is beyond disgraceful that their memories are used for cartoons and political buttons and television shows all for the purpose of advancing outright falsehoods just to gain political points. In their refusal to read documents or accept facts over fantasies, Republican conspiracy theorists have damaged this country in ways that cannot yet be fully comprehended."

However, elsewhere in the article, Eichenwald listed some areas of inquiry that he considered valid for investigation, and that were in line with investigations done after previous deadly attacks:

"One important point has been universally acknowledged by the nine previous reports about Benghazi: The attack was almost certainly preventable. Clinton was in charge of the State Department, and it failed to protect U.S. personnel at an American consulate in Libya. If the GOP wants to raise that as a talking point against her, it is legitimate."

The important thing to note here is that Eichenwald, a journalist, wrote those words, not Blumenthal. So how did Blumenthal get wrapped up in this?

As it turns out, one of the emails leaked by Wikileaks was sent by Blumenthal to Clinton’s campaign chairman, John Podesta. The email in question was sent on the same day the Newsweek article came out; it was addressed to "undisclosed recipients."

In the email, Blumenthal forwarded Eichenwald’s article, with the header, "Key Section. Then whole article below." It includes both a link to the article and some text from it, including Eichenwald’s byline. Here's a screenshot: 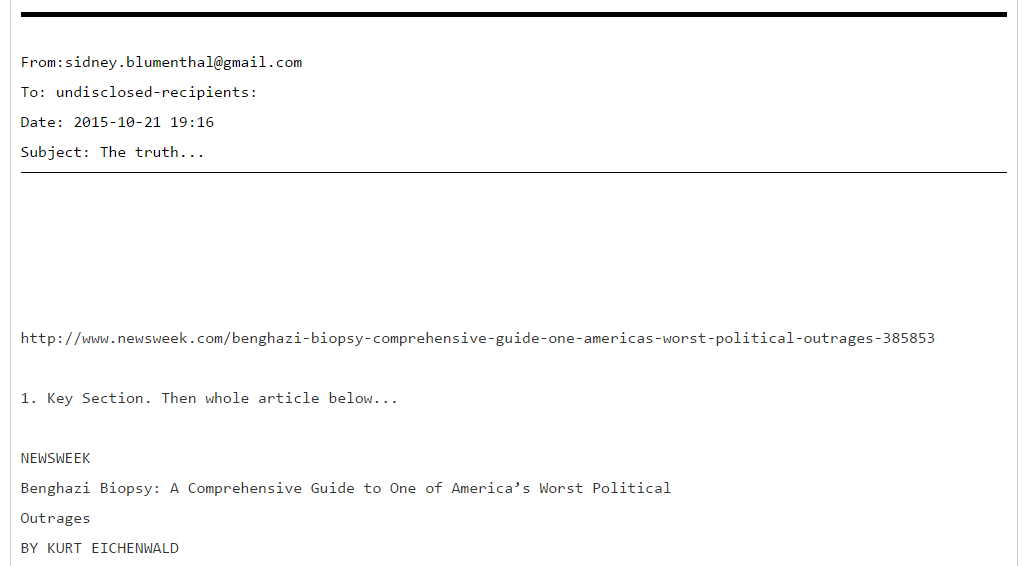 How Eichenwald’s words and Blumenthal’s became conflated is open to debate. Eichenwald pointed to Sputnik, a Russian website, which wrote an article that indicated that the words were Blumenthal’s. (The original Sputnik article has since been pulled from the Web.) Other observers, including BuzzFeed News’ Jon Passantino, have pointed to a viral tweet as the source instead.

Either way, what is not in doubt is the inaccuracy of Trump’s comment. At most, one could say that Blumenthal had forwarded an article, without added commentary, to Podesta. But that doesn’t make those words Blumenthal’s, and it does not mean that this is a case of Blumenthal "admitting that they could have done something about Benghazi," as Trump said. It’s much more plausible that Blumenthal, a Clinton loyalist, was forwarding the article to Podesta because of its overall, forcefully worded argument that the Republicans had turned Benghazi into a political football, not because of a couple cautionary sentences out of a 10,000-word article.

The Trump campaign did not respond to an inquiry for this fact-check..

Trump said that Blumenthal wrote that the Benghazi attack "was almost certainly preventable. Clinton was in charge of the State Department, and it failed to protect U.S. personnel and an American consulate in Libya."

But Blumenthal didn’t write those words; Eichenwald did. We rate the statement False.

Newsweek, "Dear Donald Trump and Vladimir Putin, I am Not Sidney Blumenthal," Oct. 10, 2016