Deborah Ross
stated on October 18, 2016 in a campaign ad:
"Sen. (Richard) Burr voted no on the Violence Against Women Act." 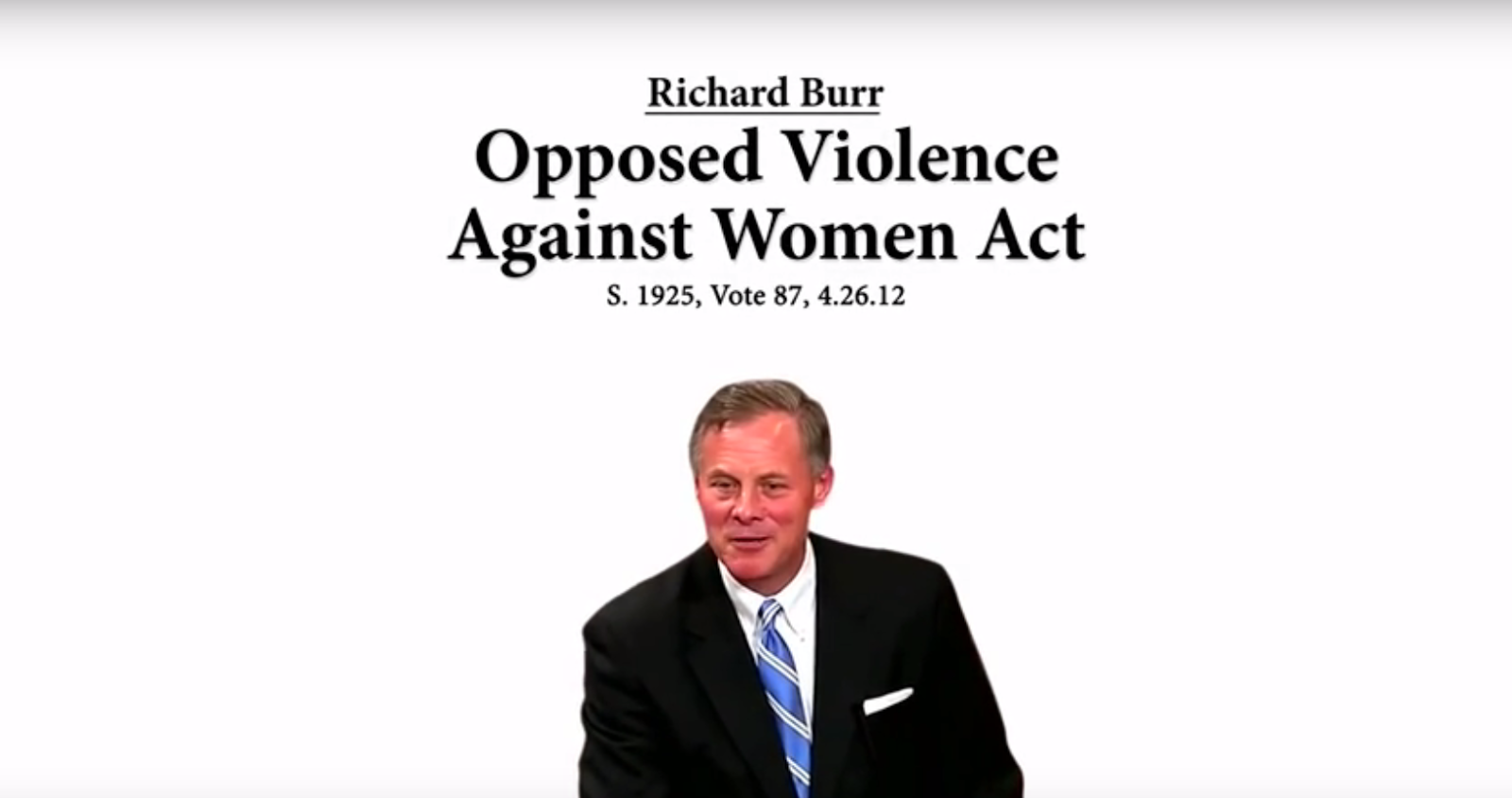 Is Ross’ ad correct? In part, but it it leaves out important context.

What was Burr voting for?

First, we should note that the ad used some loose language about what Burr was actually voting on. The 2012 vote referenced in the ad was for a reauthorization bill -- that is, an updating of the existing Violence Against Women Act, which had lapsed in 2011. Burr was not in Congress when the act itself was initially passed in 1994; he was sworn in for his first term in the U.S. House the following year, in 1995.

Congress voted to reauthorize the act in both 2000 and 2005, and both legislative efforts were fairly uncontroversial.

For the 2000 effort, Burr was in the House, and he voted in favor of the reauthorization, which was passed by the overwhelming margin of 415-3. While that version didn’t become law, another version did become law during that Congress; it passed the House by voice vote. Individual House members’ votes aren’t recorded in a voice vote, but they are usually only held for non-controversial measures.

The 2012 reauthorization effort was far more controversial than the previous two, since it involved changes that some social conservatives found objectionable.

At the time, the Democrats controlled the presidency and the Senate, while the Republicans controlled the House. The Senate bill would "allow Indian tribal courts to try certain non-Indians in some cases of domestic violence on reservations, expand the number of temporary visas for illegal immigrants who were victims of domestic violence and extend the protections of that act to gay men and lesbians," the New York Times reported at the time.

These provisions were anathema to many conservatives, and when faced with a vote on April 26, 2012, Burr was one of 31 Republicans to vote against it, while 15 Republicans voted for it. Overall, the measure passed the chamber by a 60-31 margin.

Instead, Burr voted for a failed Republican-sponsored amendment that would have stripped out some of the elements of the bill that were controversial to Republicans.

Herschel Walker
stated on November 11, 2022 in an interview
Raphael Warnock "believes in no cash bail" and "letting people out of prison that are going to make us prisoners in our own home."

We were unable to find a contemporaneous explanation by Burr on the reason for his vote through Google or Nexis. The only comment he made on the bill to a media outlet came was procedural rather than substantive, when he said that he thought there were more urgent bills for the chamber to prioritize than the reauthorization.

Ultimately, the Republican-led House passed a version that omitted the provisions of the Senate bill that conservatives opposed. The House and Senate were unable to come to an agreement, and the measure was dead for the duration of that Congress.

It’s worth noting that Politico reported on March 14, 2012, that the Democratic effort to push a vote on the Violence Against Women Act in the spring of 2012 was to make it a "political weapon."

"Republicans have several objections to the legislation, but instead of making changes, Schumer wants to fast-track the bill to the floor, let the GOP block it, then allow Democrats to accuse Republicans of waging a ‘war against women,’ " the Politico story said. "It’s fodder for a campaign ad, and it’s not the only potential 30-second spot ready to spring from Senate leadership these days."

With this ad, that mission was accomplished.

After the failure to get the two chambers to agree on a single version in 2012, the new Congress took up the effort again in 2013.

Partisan control of each part of government remained the same in 2013, and the reauthorization effort played out in a similar fashion. Republicans pursued an amendment to strip out some of the elements they found problematic, such as the provisions related to native Americans and gender identity. On Feb. 7, 2013, the amendment failed by a 34-65 margin, with Burr voting in favor of it.

Then, on Feb. 12, 2013, the Senate passed the original measure, 78-22. Burr was among a handful of Republican senators who switched their position and supported the bill.

In fact, Burr has subsequently trumpeted elements of this bill. Burr joined with Sen. Barbara Boxer, D-Calif., to introduce the Child Protection Compact Act, which was enacted as part of the Violence Against Women Act reauthorization. This provision "seeks to protect and rescue children from trafficking by creating ‘Child Protection Compacts’ between the United States and countries with significant numbers of children in human trafficking," Burr’s Senate website says.

On the other hand, the Ross camp argues, the refusal of Republicans to approve the original bill resulted in a year-long delay in the reauthorization, which kept sexual violence awareness and assistance programs on college campuses from being established, even though reports of sexual assault on college campuses were at an all-time high.

So where does this leave us?

The Ross camp argues that the ad is accurate since it said that Burr voted against the 2012 version of the bill. They have a point, but making this argument requires ignoring that Burr voted to reauthorize the Violence Against Women Act three times -- in 2000, 2005 and 2013 -- even as he voted against it once, in 2012.

The Ross camp also argues that the 2012 vote is important because Burr opposed -- and even voted to strip -- provisions involving LGBT and native Americans. They also have a point here, but their argument would have been stronger had the ad specifically cited Burr’s actions toward LGBT and native Americans. The ad makes no such distinctions; a viewer would be left to assume that he opposed anything to combat violence against women.

Finally, we think it’s relevant to note here that, according to Politico, the Democrats specifically teed up this vote to put Republicans in a bind so they could use their votes in campaign ads -- a tactic that both parties have used when they are in a position to do so.

Ross’ ad said Burr "voted no on the Violence Against Women Act."

Burr did vote against the 2012 version of the law’s reauthorization, which was important because it effectively meant delaying the revival of an act that had expired. However, the ad ignores that three other times over 13 years Burr voted for a reauthorization of the same law. We rate the statement Half True.

Virginian-Pilot, "Here's how North Carolina's and Virginia's members of Congress voted on major issues in the past week," April 30, 2012 (accessed via Nexis)