Brad Schneider
stated on April 20, 2017 in an op-ed:
"More than 260,000 Americans are employed by the domestic solar industry — three times as many workers as employed by the entire coal mining industry."

As a candidate and as president, Donald Trump has championed the cause of coal mining. But critics of the coal industry have countered that Trump and other supporters of coal are overlooking an energy sector with an even bigger impact on jobs -- solar energy.

In a Chicago Tribune op-ed published on April 20 -- two days before Earth Day -- Rep. Brad Schneider, D-Ill., took issue with Trump’s environmental priorities. At one point in the op-ed, he wrote, "More than 260,000 Americans are employed by the domestic solar industry — three times as many workers as employed by the entire coal mining industry."

We had previously looked at whether there are more people employed in the U.S. solar-energy industry than in the oil industry. (There aren’t.) But the comparison with the coal industry was new to us, so we decided to take a look.

The sources of Schneider’s statistics

When we contacted Schneider’s office, they cited two sources, one for each number in the statement.

The first number -- 260,000 U.S. solar workers -- stems from the 2016 edition of the National Solar Jobs Census, which is published by the Solar Foundation, a nonprofit organization aligned with the solar industry. We confirmed that, according to the foundation’s calculations, there were 260,077 solar workers in the United States in 2016.

The second number -- unstated in the op-ed, but equaling 87,000 workers employed in coal mining, if you do the math -- actually overstates the number of mine workers. According to the Energy Information Administration, a part of the federal Energy Department, the number of people working at coal mines was 65,971 in 2016. The actual ratio between the two numbers would be almost four-to-one.

So the congressman has some support for his statement. However, the comparison is not exactly apples-to-apples. Let’s explore why.

One problem for Schneider’s numerical comparison is that it uses different databases, with different methodologies.

The Solar Foundation told us that their data comes from more than 500,000 telephone calls and more than 60,000 emails to known and potential energy establishments across the United States, resulting in a total of 3,888 full responses. The group counted jobs held by a worker who spends at least 50 percent of his or her time on solar-related work. They included jobs in installation, manufacturing, sales, distribution, and project development, among other categories.

Karine Jean-Pierre
stated on June 13, 2022 in a press briefing
When Joe Biden “walked into this administration … 20 million people were on unemployment insurance benefits.”

The coal industry considers the official coal employment numbers to be low "to the point of being fiction," said Terry Headley, a spokesman for the American Coal Council.

"They don't include many people who work at a coal mine every day, full time, but are not company employees," Headley said. "They are employees of service companies that provide direct support services, such as coal truck drivers, electricians, surveyors, machinists, mechanics, construction workers and others. Taken together, despite everything that has been thrown at it, West Virginia alone has some 50,000 ‘coal miners and contractors’ according to the West Virginia Office of Miners Health Safety and Training. If you go by the federal government data, West Virginia has only about 13,000 coal miners working."

While there will always be difficulties in making an exact comparison between the two energy sectors, there is a database well-suited for directly comparing solar and coal jobs. The United States Energy and Employment Report was designed by the Energy Information Association to put a variety of energy sectors on an equal statistical footing.

This report found 373,087 solar jobs in 2016, compared to 160,119 coal jobs. (That’s a higher number for solar jobs than in the Solar Foundation report; it’s because the Energy Information Administration included jobs even if a relatively small proportion of the worker’s work week was spent on activities related to solar energy.) 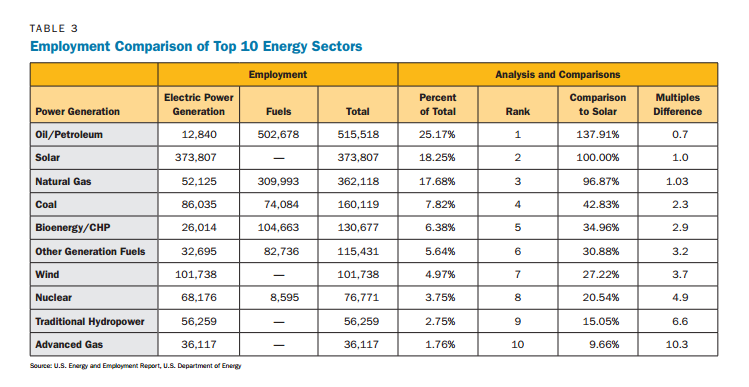 This data produces a ratio of 2.3 solar jobs for every coal job. So by this measurement, there are more solar jobs than coal jobs, but it’s short of three times as high, as Schneider wrote.

Tara Sinclair, a George Washington University economist and an expert in labor-force data, said she agreed that the U.S. Energy and Employment Report data is the best source to use.

She added that other data from Indeed, where she is a senior economic fellow, bolsters the idea that the labor market is healthier for solar than for coal.

"We saw almost eight times more solar job postings than coal job postings in the United States in the first quarter of 2017," Sinclair said.  "Of course, these numbers don't represent current employment and are reflective of both growth and turnover in the different sectors. Still, it gives a sense of scale of these industries. This comparison leads me to think that Rep. Schneider's estimates may be on the conservative side looking forward."

Based on an apples-to-apples comparison using the best available data, the ratio is just short of three-to-one. Still, the data we found confirms that the number of solar-related jobs does outpace the number of coal-related jobs today. We rate the statement Mostly True.