Steve Mnuchin
stated on April 27, 2017 in a April 26 press conference:
Says President Donald Trump "has given more financial disclosure than anybody else."

Treasury Secretary Steve Mnuchin says President Donald Trump "has no intention" of releasing his tax returns to the public, arguing that Americans have more than enough information about the president's financial matters.

During an April 26 press conference to outline Trump's tax plan, a reporter asked Mnuchin if Trump will release his tax returns.

We’ve heard claims like this before. But as we concluded in the past, Trump’s lack of tax returns undermine any type of claim that he’s released more financial information than anybody else.

What do we know about Trump’s finances?

When we asked the Treasury Department about Mnuchin’s comments, staff told us that his remark was specifically in reference to Trump’s 92-page financial disclosure form.

Trump’s disclosure form is extensive and includes 92 pages of small-print details on assets and income.

Treasury spokesman Tony Sayegh said Mnuchin claim was grounded in the fact that Mitt Romney’s form was only 47 pages, not counting amendments and updates. Sayegh argued that even Romney, a businessman with a complex set of holdings, didn't release as much in his financial disclosure.

When Trump argued that his financial disclosures were "the most extensive financial review of anybody in the history of politics," we rated that claim False.

The two most obvious pieces of the puzzle missing without Trump’s tax returns are the effective rate of tax he pays on his income, and the extent and nature of his charitable giving.

Tax returns also can give a clearer picture of Trump’s liquid assets and what specific mix of taxes the candidate paid. The returns would also show if Trump has access to specialized tax breaks.

"It is true that Trump's businesses have received a lot of attention, but without the release of Trump's tax returns, we don't know a lot about his personal financial situation," Lawrence White, an economist at New York University’s Stern School of Business, told PolitiFact in October.

Tax Analysts, a publisher specializing in tax policy, has been collecting publicly available tax returns of presidential candidates and other top officials for its Tax History Project. This archive goes back as far as the 1913 tax returns of future president Franklin D. Roosevelt.

Before the election, Trump promised he would release his returns after a routine audit was over. However, there is no law that prohibits someone from releasing tax returns during an audit. (Richard Nixon released tax returns in the middle of an audit a year after being re-elected.)

On April 17, White House press secretary Sean Spicer said Trump's audit was still ongoing, but Mnuchin remarks suggest it might not happen at all.

Without his tax returns, it’s hard to know how Trump would personally benefit from his tax cut proposals. Trump’s proposal recommends sharp cuts in individual and business income tax rates, as well as eliminating the estate tax and alternative minimum tax.

Additional context about Trump, tax returns and the public

Although Trump has refused to release his tax returns, some of them have leaked out.

Most recently, Rachel Maddow of MSNBC revealed a small portion of Trump's 2005 tax return. It showed that he earned $150 million that year and paid federal taxes of about $38 million.

In 1995, Trump reported a $916 million loss, according to the three pages of returns obtained and verified by the New York Times in September.

We know a little bit about Trump’s taxes in the 1970s. A 1981 report by New Jersey gambling regulators analyzed Trump's finances as part of his efforts to get a casino license for a proposed casino-hotel complex. Page 33 reports on Trump's income and federal tax payments for 1975 through 1979.

The report says that Trump paid federal taxes for three of those five years, 1975-77. Trump did not pay federal income tax in 1978 and 1979 because, according to the tax rules, he lost money those years. But the report reveals no specifics, so the details of his tax returns for those years remain a mystery.

Trump’s taxes have piqued the interests of voters for quite some time now. In January, Trump said that Americans don’t care about his tax returns, but several polls of the time show that a sizable portion of the public does think Trump’s tax returns are an important issue.

Mnuchin said Trump "has given more financial disclosure than anybody else."

Trump released a financial disclosure report that all presidential candidates are required to fill out, but the fact that Trump has not released any tax filings undermines Munchin’s claim.

Experts told us that tax returns would offer valuable details on his tax rate, the types of taxes he paid, and his charitable giving, as well as a better idea of his income-producing assets.

When we look at all the types of financial disclosure Trump could provide to the public, the lack of transparency around his tax returns remains a significant omission compared with recent presidents. 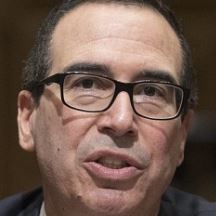 Trump-O-Meter, "Release his tax returns after an audit is completed," April 26

Politico, "Mnuchin: Trump has 'no intention' of releasing his tax returns," April 26

The Washington Post, "Trump boasts about his philanthropy. But his giving falls short of his words," Oct. 29