Donald Trump
stated on August 22, 2017 in a rally in Phoenix:
"We have become an energy exporter for the first time ever just recently."

In a 75-minute rally speech that revisited his response to the Charlottesville, Va., unrest and scolded the national media, President Donald Trump slid in a note of pride about the United States’ balance of trade in energy.

"We're going to do an infrastructure bill," Trump said. "We will build gleaming new roads, bridges, highways, railways, waterways, all across our beautiful land. Our greatest creations, our most incredible buildings, our most beautiful works of art are just waiting to be brought to life. American hands will build this future. American energy will power this future. We have become an energy exporter for the first time ever just recently."

Was he correct to say that the United States has "become an energy exporter for the first time ever just recently"?

But to get to the short answer, you have to wade through several possible interpretations of what Trump meant. (The White House did not clarify his meaning for us.)

One way to read Trump’s statement is to take it literally -- that the United States only recently began to export energy. This is flat wrong.

"We have been exporting coal, natural gas, electricity, refined products and energy technologies for a very long time," said Paul Sullivan, a professor at National Defense University and an adjunct professor at Georgetown University who specializes in energy security issues. "We were once, during the time of JD Rockefeller, the world's near monopoly on kerosene. Liquefied natural gas exports from Alaska to Japan have been around for a long time. Piped gas to Mexico and Canada are normal events. We have a massive electricity trade with Canada."

"This has been falling, but we are still a huge net energy importer," said Jason Bordoff, who directs Columbia University’s Center on Global Energy Policy.

In its most recent projections, the federal Energy Information Administration concluded that the United States would become a net energy exporter around 2026, depending on the course of future patterns of global supply, demand and pricing. 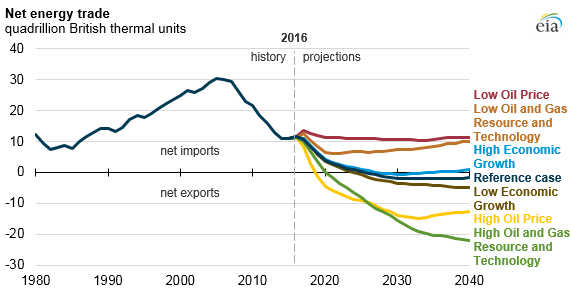 What’s clear is that the United States has not yet become a net exporter of energy, as Trump’s past-tense remark indicated. If that day comes in 2026 -- and it may or may not -- that would be two years after Trump finishes a possible second term.

Perhaps rather than "energy," Trump meant to say "crude oil."

If this is what Trump meant, the statement would still be problematic. It wouldn’t be the first time "ever." And the relevant change was signed under his predecessor, President Barack Obama.

On Dec. 18, 2015, the United States enacted legislation to repeal a ban on most crude-oil exports that had been in place since the energy-crisis days of 1975. (Exports of refined petroleum were not blocked by the law, just crude.)

Here’s a chart showing U.S. crude-oil exports going back to the 1980s. (The years between 1975 and 2015 show some export activity because trade with some countries, such as Canada, was exempt from the law.) The rapid rise in crude-oil exports near the end of the chart reflects the lifting of the export-restriction law.

It’s possible to substitute any number of energy subcategories into Trump’s remark to see whether they make the statement more accurate. Some do, some don’t.

The United States has been a net coal exporter for many years. It has been a net exporter of refined petroleum products since around 2011. So neither of those would make Trump correct. 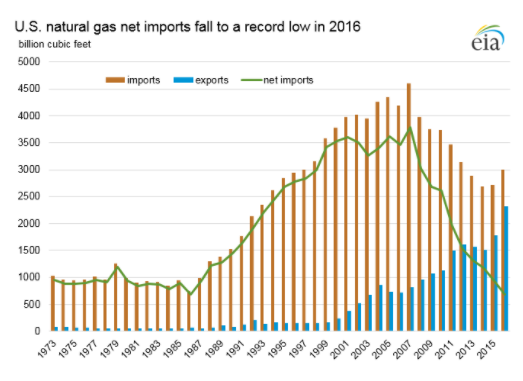 Energy experts say that this is a significant development, though one that Trump can take little credit for.

"It has been a trend that was activated by the U.S. shale boom and made possible by the Obama administration's policy on liquefied natural gas exports," said Anna Mikulska, a fellow with Rice University’s Center for Energy Studies.

Ironically, Bordoff added, a different Trump policy goal -- reviewing Obama-era increases in fuel-efficiency standards for vehicles -- could make it harder for the United States to become a net exporter of energy, the very thing he applauded in Phoenix.

Trump said that "we have become an energy exporter for the first time ever just recently."

PolitiFact Rating:
False
https://time.com/4912055/donald-trump-phoenix-arizona-transcript/
"We have become an energy exporter for the first time ever just recently."
Donald Trump
President