Ivanka Trump
stated on December 21, 2017 in an interview on "Fox & Friends":
In April, "the vast majority will be (filling out their taxes) on a single postcard."

During an interview on Fox & Friends in which she touted the recently passed tax bill, Ivanka Trump said voters would benefit more quickly than they might have imagined.

"I'm really looking forward to doing a lot of traveling in April when people realize the effect that this has, both on the process of filling out their taxes -- the vast majority will be doing so on a single postcard -- but also having experienced the relief that will be starting as early as February," she said.

.@IvankaTrump: "I'm really looking forward to doing a lot of traveling in April when people realize the effect that this has... The vast majority will be [doing their taxes] on a single postcard." pic.twitter.com/D2bB7WgPIL

Is it really true that in April, "the vast majority will be (filling out their taxes) on a single postcard"?

No. There are two problems with what Trump said. We’ll take them in order.

There isn’t anything in the tax bill that would take effect soon enough to change taxpayers’ filing choices in any significant way by April 2018.

The bill’s provisions only address tax year 2018 and beyond. So in April, taxpayers will be filing their paperwork for tax year 2017 to the IRS -- that is, under existing tax law, not the new law.

"Most people will still be filing something that looks familiar to them from past years," said Joseph Rosenberg, a senior research associate at the Urban Institute-Brookings Institution Tax Policy Center.

There is no ‘postcard’ filing plan for individual taxpayers

There isn’t a postcard filing option today, and there’s nothing in the bill that would create one.

The idea didn’t come from nowhere. In November, House Republicans touted their plan as one that could be accommodated by a postcard-sized form. The president liked the idea so much that he held one up and kissed it for the cameras when meeting with lawmakers at the White House.

"It's going to make life very simple," he said on Nov. 2, 2017. The only people that aren't going to like this is H&R Block. They're not going to be very happy. That's probably one of the only companies in the country that's not going to be thrilled."

But in the end, the bill didn't do much to make this idea a reality.

The possibility of creating a postcard option "is most likely one of many things the IRS will have to figure out and issue new regulations on," said Patrick Newton, a spokesman for the bipartisan Committee for a Responsible Federal Budget. But that’s not happening immediately, he said.

Newton said that there is already a pretty easy way to file your tax returns -- the 1040EZ form. It looks like this, with just one page to fill out: 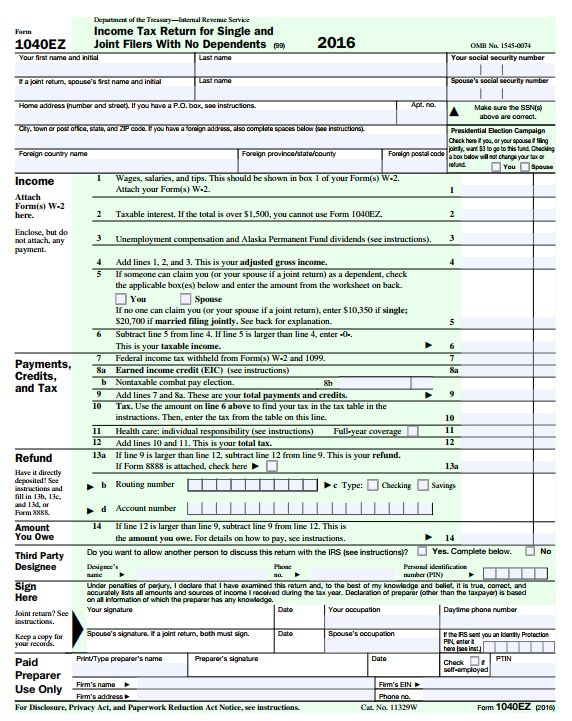 "While it’s not postcard-sized, it’s pretty simple, and whatever they end up with in the future will probably look a lot like that currently does," Newton said.

Could the number of people using the 1040EZ increase due to the tax bill’s passage (albeit in 2019)? Rosenberg said the number might increase on the margins due to the raising of the standard deduction, which would save some taxpayers from itemizing -- something they would have to do on the full 1040 form.

Still, he added, "there are relatively few people who currently itemize who have a simple enough situation" to shift to the 1040EZ.

When we contacted the White House, they referred us to a tweet sent by Ivanka Trump a few hours after her Fox & Friends interview..

Trump replied to a tweet by Miranda Yaver, a self-described Democratic political scientist, that said, "Actually, @IvankaTrump, in April 2018 people will be doing their their 2017 taxes based on the current law."

Actually, @IvankaTrump, in April 2018 people will be doing their their 2017 taxes based on the current law. https://t.co/cZFiQ3QKJN

Trump replied, "Correct! All across America people will be thinking about how cumbersome the old tax code is & energized about upcoming simplification!"

Correct! All across America people will be thinking about how cumbersome the old tax code is & energized about upcoming simplification! https://t.co/HZZhmvK5Xc

That may happen, but it doesn’t make her original remark correct.

Ivanka Trump tweeted that in April, "the vast majority will be (filling out their taxes) on a single postcard."

That’s not the case. The recently passed bill takes effect for the 2018 tax year, which people will be filing returns on in April 2019 -- not this coming April. And there is no plan for a postcard filing option. Simple filing options already exist and are widely used, but tax experts do not expect a surge in their use as a result of the tax bill in April 2019. We rate her statement False.

PolitiFact Rating:
False
In April, "the vast majority will be (filling out their taxes) on a single postcard."
Ivanka Trump
Assistant to the president
https://insider.foxnews.com/2017/12/21/ivanka-trump-praised-helping-tax-cuts-pass-through-congress

CNBC, "Republicans say you can file your taxes with a postcard if new bill passes; H&R Block shares drop," Nov. 2, 2017

Email interview with Patrick Newton, spokesman for the Committee for a Responsible Federal Budget, Dec. 19, 2017