Jeff Sessions
stated on July 12, 2017 in a speech:
"According to a recent study from the University of California Riverside, (sanctuary) cities with these policies have more violent crime on average than those that don’t."

"When cities like Philadelphia, Boston, or San Francisco advertise that they have these (‘sanctuary city’) policies, the criminals take notice," Sessions said July 12 in Las Vegas. "According to a recent study from the University of California Riverside, cities with these policies have more violent crime on average than those that don’t."

Local jurisdictions that limit their cooperation with federal immigration officers are commonly called "sanctuary cities." There isn’t one particular policy followed by all jurisdictions, and the extent and situations in which they restrict cooperation varies nationwide.

Sessions said there were "some 300 jurisdictions" refusing to cooperate with federal immigration authorities and that they were "protecting criminals rather than their law-abiding residents."

Data and research on so-called sanctuary cities and their impact on crime is limited. So we were curious about Sessions' citation of a university study.

It turns out Sessions’ effort to use research to back his claim got some bad grades from the professors. Study researchers disputed Sessions’ conclusion of their work and said they were unaware of other studies supporting the attorney general’s claim.

Here we will lay out the study, Sessions’ assessment and the researchers’ response.

Sanctuary cities and studies on their policies

President Donald Trump opposes sanctuary cities, contending they are a haven for criminal immigrants. He routinely cites as an example the death of Kate Steinle, a San Francisco woman whom authorities say was fatally shot by an immigrant in the country illegally who had been previously deported five times.

Trump campaigned on a promise to cut federal funding for sanctuary cities, hoping that the threat of losing money will make them assist federal authorities. A judge has blocked Trump’s executive order toward this end, but a House bill for this measure passed in June.

We’ve fact-checked many claims on sanctuary cities and public safety.

Experts routinely tell us there isn’t abundant research specifically about sanctuary cities and their impact on crime. Sanctuary ordinances have been around for decades, but only until recently have social scientists studied their effect on crime rates, Elizabeth F. Cohen, an associate professor of political science at Syracuse University, told us for a previous fact-check on a claim of studies showing sanctuary cities "do not lead to an increase in crime because of the presence of people that are undocumented."

Researchers from the study Sessions cited found that sanctuary policies do not affect crime rates either way.

The study analyzed crime data from jurisdictions that "expressly forbid city officials or police departments from inquiring into immigration status" and analyzed it in two methods.

First, researchers compared cities’ crime rate in the year before and the year after a policy’s implementation. In the second approach, they "matched each sanctuary city to a similarly situated non-sanctuary city based on relevant census and political variables," the authors explained in an October 2016 post in the Washington Post’s Monkey Cage blog.

At the end, "We find no statistically discernible difference in violent crime rate, rape, or property crime across the cities. Our findings provide evidence that sanctuary policies have no effect on crime rates, despite narratives to the contrary," said the 2016 study, titled "The Politics of Refuge: Sanctuary Cities, Crime, and Undocumented Immigration." The researchers were from the University of California at Riverside and Highline College. 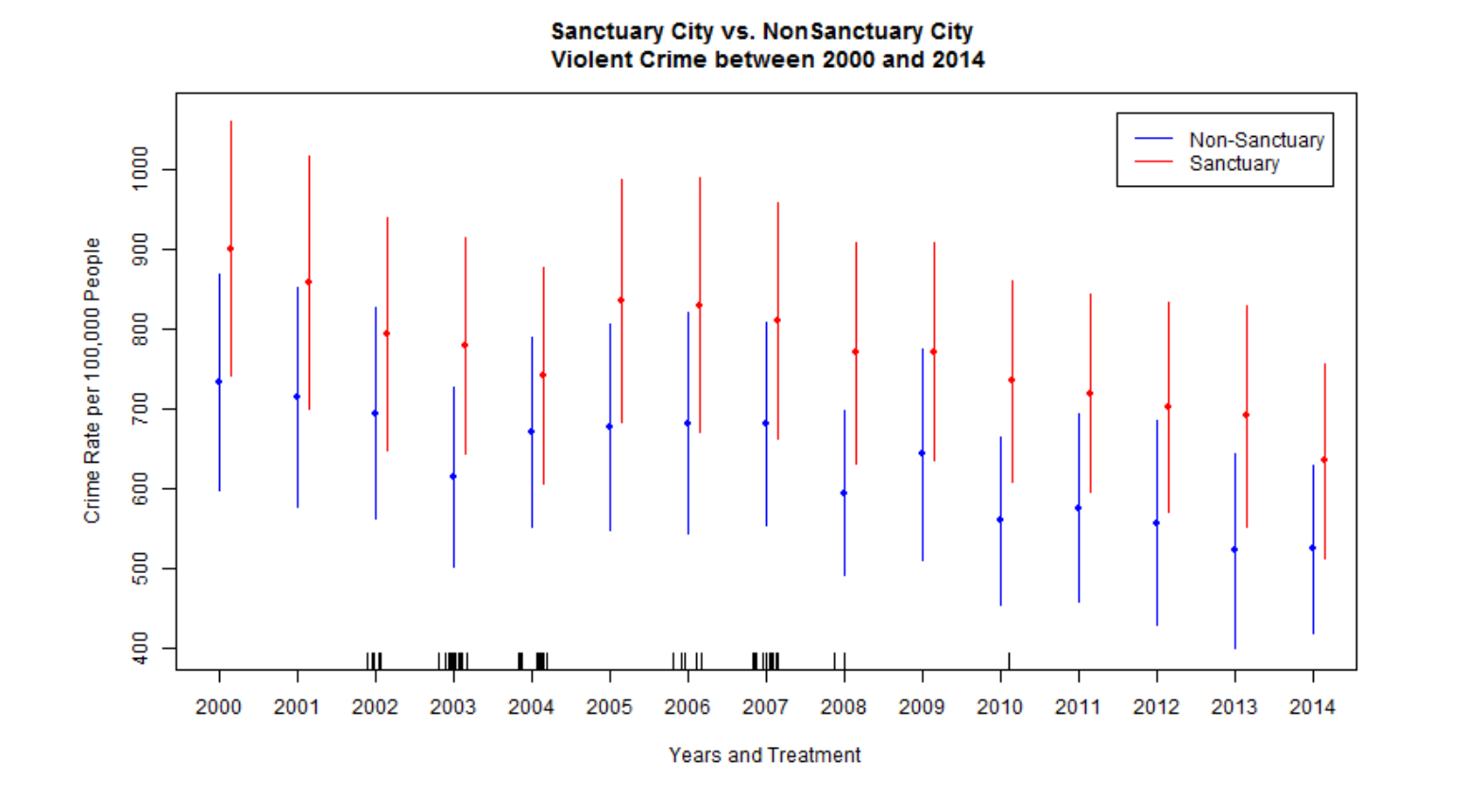 (Figure from University of California at Riverside and Highline College study on sanctuary cities.)

In a statement, the Justice Department said, "The Attorney General accurately cited data from a study that clearly showed that the violent crime rate was higher in sanctuary cities versus non-sanctuary cities. That is a fact and assertions to the contrary ignore that data."

But the text of the study offered a note about the figure.

"Without consulting our paper (or piece on the Monkey Cage blog) yes, the graph does appear to show that crime is higher in sanctuary cities," Benjamin Gonzalez-O’Brien, one of the authors of the study told PolitiFact. "However, the vertical lines in the figure represent confidence intervals, which capture statistical uncertainty. Basically, the actual crime rate could be anywhere in that range, from the bottom of the vertical line to the top. Because these confidence intervals are large and overlap with those of non-sanctuary cities, it cannot be said that crime rates in sanctuaries are higher than in non-sanctuaries."

The study includes another figure that shows violent crime before and after passage of sanctuary city policies. Post-implementation, some cities had higher crime rates, others had lower rates and others saw no change, according to the study. 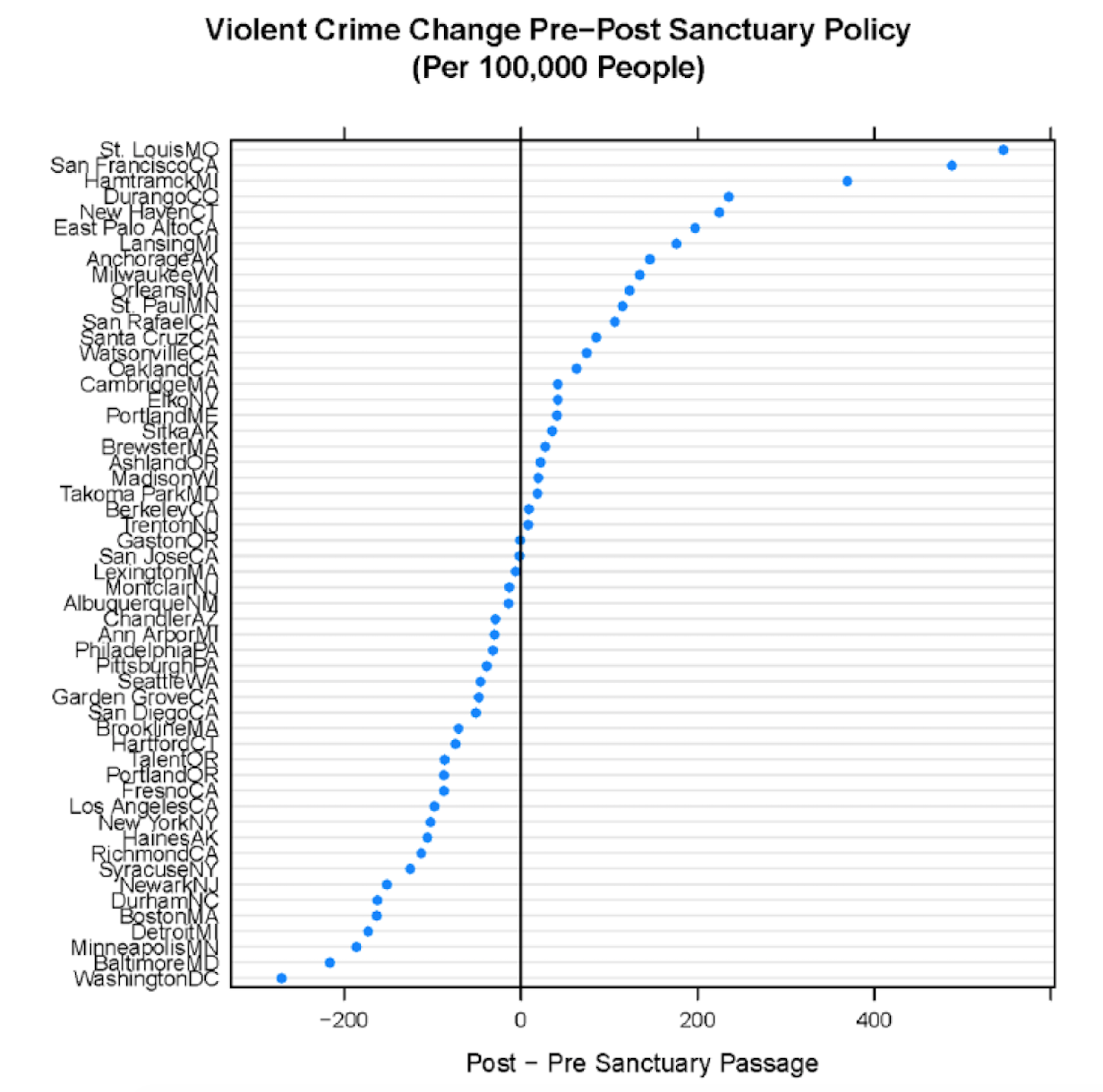 (Figure from University of California at Riverside and Highline College study on sanctuary cities.)

"If sanctuary policies led to increased crime, then any city that passes one should have a higher crime rate following its passage. This is not the case," Gonzalez-O’Brien said. "Taken together, these two pieces of evidence suggest no relationship between sanctuary status and crime."

Sessions on July 21 also spoke about sanctuary city policies to law enforcement officials in Philadelphia. He did not cite the researchers’ study, according to a copy of the remarks provided by the Justice Department.

Sessions claimed, "According to a recent study from the University of California Riverside, (sanctuary) cities with these policies have more violent crime on average than those that don’t."

Sessions’ claim is based on one figure of the study that does appear to show that violent crime is higher in sanctuary cities. But the researchers say Sessions mischaracterized the findings and failed to consider additional information in the study. Vertical lines in the figure represent confidence intervals and capture statistical uncertainty, one of the researchers said. Another figure in the study also shows that post-sanctuary policies, some cities had higher crime rates, others had lower rates and others saw no change.

Overall, the study concluded that sanctuary policies had no effect on crime rates.

Sessions’ statement contains an element of truth but ignores critical facts that would give a different impression. We rate it Mostly False.

PolitiFact Rating:
Mostly False
"According to a recent study from the University of California Riverside, (sanctuary) cities with these policies have more violent crime on average than those that don’t."
Jeff Sessions
Attorney General

Washington Post, Sanctuary cities do not experience an increase in crime, Oct. 3, 2016

PolitiFact, Who were the victims of illegal immigrants Trump named at the RNC?, July 21, 2016

PolitiFact, Sally Hernandez says cities labeled as sanctuaries have less crime, according to FBI statistics, May 10, 2017