During a speech before tens of thousands of Boy Scouts at the group’s quadrennial Jamboree, President Donald Trump took a moment to tout his economic achievements as president.

"I'll tell you what, we are indeed making America great again,"  Trump said. "What's going on is incredible. We had the best jobs report in 16 years."

Trump, as a candidate, regularly bashed the low unemployment rates under President Barack Obama as making the national jobs picture look better than it actually was. Now he says the economy is surging, and the numbers show it.

Does he have a point now?

When we checked with the White House, they referred us to a Bloomberg article headlined, "Pickup in Confidence Shows Americans Upbeat on Jobs, Economy." The article notes that "unemployment (is) near a 16-year low."

Indeed, today’s unemployment rate -- 4.4 percent -- is tied for the lowest in the past 16 years, going back to June 2001. There were four other months prior to Trump’s presidency that matched today’s rate, and it was slightly lower -- 4.3 percent -- a month earlier, during Trump’s own presidency. Here’s a chart.

That said, the term "jobs report" refers to a monthly news release by the Bureau of Labor Statistics, and the unemployment rate is only one of two headline numbers in those reports. The other one is the gain or loss in jobs compared to the previous month’s number.

That second number, while solid, is not "the best" in 16 years.

Meanwhile, there are a number of lower-profile statistics in every jobs report.

Tara Sinclair, a George Washington University economist, noted that one of these measurements -- the ratio of employed people to the population as a whole -- remains stuck well below its pre-Great Recession highs. Here’s a chart: 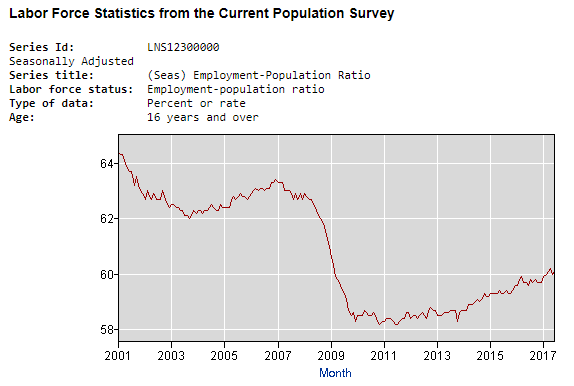 Gary Burtless, a Brookings Institution economist, said the shrinkage in the number of jobs created per month should be taken with a grain of salt, since the country is approaching full employment.

Overall, Burtless said, "employment has kept rising and involuntary unemployment has been falling for about seven years, and that pattern has persisted thus far in the Trump administration."

Finally, it’s worth noting, as we always do, that no president can take full credit for the economy’s achievements (or its shortcomings). Many other factors, including the health of the rest of the world economy and changes in demographics and technology, play a role as well. This is especially true for a president just six months into his tenure, following years of improvement under his predecessor.

Trump said that "we had the best jobs report in 16 years" in the most recent monthly release from the Bureau of Labor Statistics.

The unemployment rate, one of two key figures in the monthly release, is near its 16-year low. But while the other major statistic in the report -- the job-gains figure -- is hardly unprecedented over the same period, experts say that’s not surprising, given where the country is in the current economic cycle. We rate the statement Mostly True.