Al Gore
stated on June 4, 2017 in an interview on Fox News Sunday:
"70 percent of Florida is in drought today."

Former Vice President Al Gore said that the global community will have to continue to respond to climate change after President Donald Trump’s "reckless" decision to pull out of the Paris climate change agreement.

Gore said that evidence abounds that climate change is real (it is ), and people "don’t have to rely on the virtually unanimous opinion of the scientific community anymore."

"Mother nature is telling us every night on the TV news now is like a nature hike through the book of Revelation," Gore said on Fox News Sunday on June 4. "People are noticing this, these downpours and historic floods. We’ve had 11 once-in-a-thousand-year downpours in the U.S. just in the last 10 years. We’ve got these wildfires that become mega fires now. Seventy percent of Florida is in drought today. Missouri declared an emergency just a couple of days ago because of another one of these. And they keep on coming."

Gore correctly cited a drought figure for Florida from a commonly used drought index. We will explain what that index shows and what the drought means in Florida.

Most of Florida is in a drought

A spokeswoman for Gore said that he was citing the United States Drought Monitor, a weekly map published on Thursdays showing drought conditions. The monitor, established in 1999, is produced by the National Oceanic and Atmospheric Administration, the U.S. Department of Agriculture, and the National Drought Mitigation Center (NDMC) at the University of Nebraska-Lincoln.

The map is based on measurements of climatic, hydrologic and soil conditions as well as reported impacts and observations from more than 350 contributors around the country.

The monitor showed that 71.66 percent of Florida was in a moderate to extreme drought as of May 30. (The previous few weeks it had been between 65 and 66.) 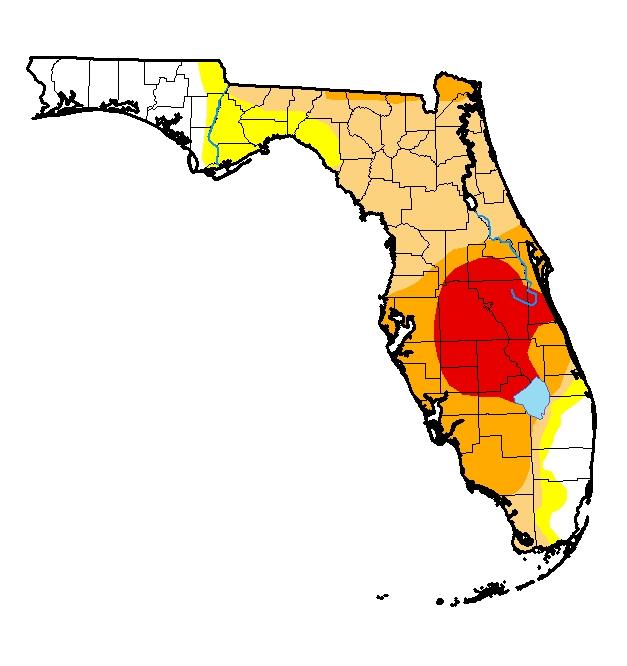 While that was the highest this year, there have been multiple other weeks that it reached similarly high levels since 2000. The last time the drought monitor showed Florida’s area of drought was as high as 71 percent was February 2013.

Florida’s dry season runs from about November through May and can leave Florida prone to drought conditions. If the dry season is drier than usual and the wet season is late to appear, a period of drought can run into summer, said Victor Murphy, climate service program manager for NOAA's National Weather Service-Southern Region.

There is a small bit of good news: The return of the rainy season — under way this first week of June — should improve drought conditions.

"There have been at least three other instances in the past 10 years when this has occurred," Murphy said. "Not coincidentally, all of these events began in the winter/spring (dry) season, and ended during the summer. This event will be similar.

"Since the Florida wet season has returned with a vengeance over the past week, and is forecast to continue over the next few weeks, the amount of Florida in drought two to four weeks from now should be substantially less than what it is today."

Gore tied in several weather events to illustrate the effects of climate change.

Experts told us that Florida is prone to periodic droughts, but rising temperatures as a result of climate change can make droughts worse.

"It’s part of the climate -- part of natural cycles," said David Zierden, the state climatologist for Florida who works at the Florida Climate Center at Florida State University. "Our current drought is no worse or more prolonged than any other drought we go through periodically."

This year the Florida Peninsula only received half of its normal rainfall during the dry season, leading to the most active wildfire season since 2011.

Temperatures have been rising in Florida -- the statewide average temperature for 26 of the last 27 months have all been warmer than normal, Zierden said.

"There is an increasing temperature trend, and warmer temperatures lead to greater evapotranspiration rates, which can exacerbate these periods of drought," Zierden said.

(Gore’s spokeswoman pointed to an article by the Union of Concerned Scientists that makes a similar point.)

While Gore’s numerical statement about the drought is correct, David Nolan, chair of the University of Miami’s Department of Atmospheric Sciences, cautioned against pointing to any particular weather event as proof of climate change.

"I am generally not comfortable with relating any local event, a drought in one place or a flood in another, to global warming," Nolan said. "What matters most is global average temperature, because that drives sea level rise, which eventually will be the biggest problem."

Gore said "70 percent of Florida is in drought today."

Gore correctly cited the United States Drought Monitor which showed that 71.66 percent of Florida was experiencing a drought for the week ending May 30.

However, that drought percentage isn’t unheard of in Florida -- there have been other periods of drought since 2000 when the monitor began mapping drought data.

Interview, Ben Kirtman, Director of the Center for Computational Science Climate and Environmental Hazards Program at the University of Miami, June 4, 2017