Donald Trump
stated on February 28, 2017 in a speech to Congress:
Says his budget "calls for one of the largest increases in national defense spending in American history."

In his address to Congress, President Donald Trump said his budget "calls for one of the largest increases in national defense spending in American history."

Trump’s budget director Mick Mulvaney gave reporters a broad overview of the president’s budget Feb. 27. He said the White House wants to spend $603 billion on defense. Mulvaney compared that to the $549 billion allowed under spending caps based on a 2011 budget control law.

On that basis, Trump seeks nearly a 10 percent increase.

But when we looked at past budgets, we found there have been much heftier jumps in military spending.

As America entered WWII, its defense spending more than doubled. However, that was a world war, so a fairer comparison might be more recent budgets. But even over the past 35 years, Trump’s plan still isn’t exceptional.

A word of caution: Making apples-to-apples comparisons in defense spending can be tricky.

Budget writers talk about the base defense budget. That number excludes billions for Overseas Contingency Operations, a big ticket item that covers the costs of actually fighting wars. Right now, that spending adds about $55 billion to the Pentagon’s account.

When the contingency money is factored in, spending today is about $587 billion. This difference can lead to some confusion as people debate the magnitude of Trump’s request. Sen. John McCain, R-Ariz., said Trump’s plan raises the Pentagon’s budget by only about $18 billion. But he’s comparing Trump’s apparent base request to the full Pentagon budget.

So with that in mind, let’s go back in time.

Todd Harrison, director of defense budget analysis at the Center for Strategic and International Studies in Washington, had a tempered view of Trump’s assertion.

"The defense budget Trump proposed for 2018 is a significant increase, but it is not one of the largest increases," Harrison told PolitiFact. 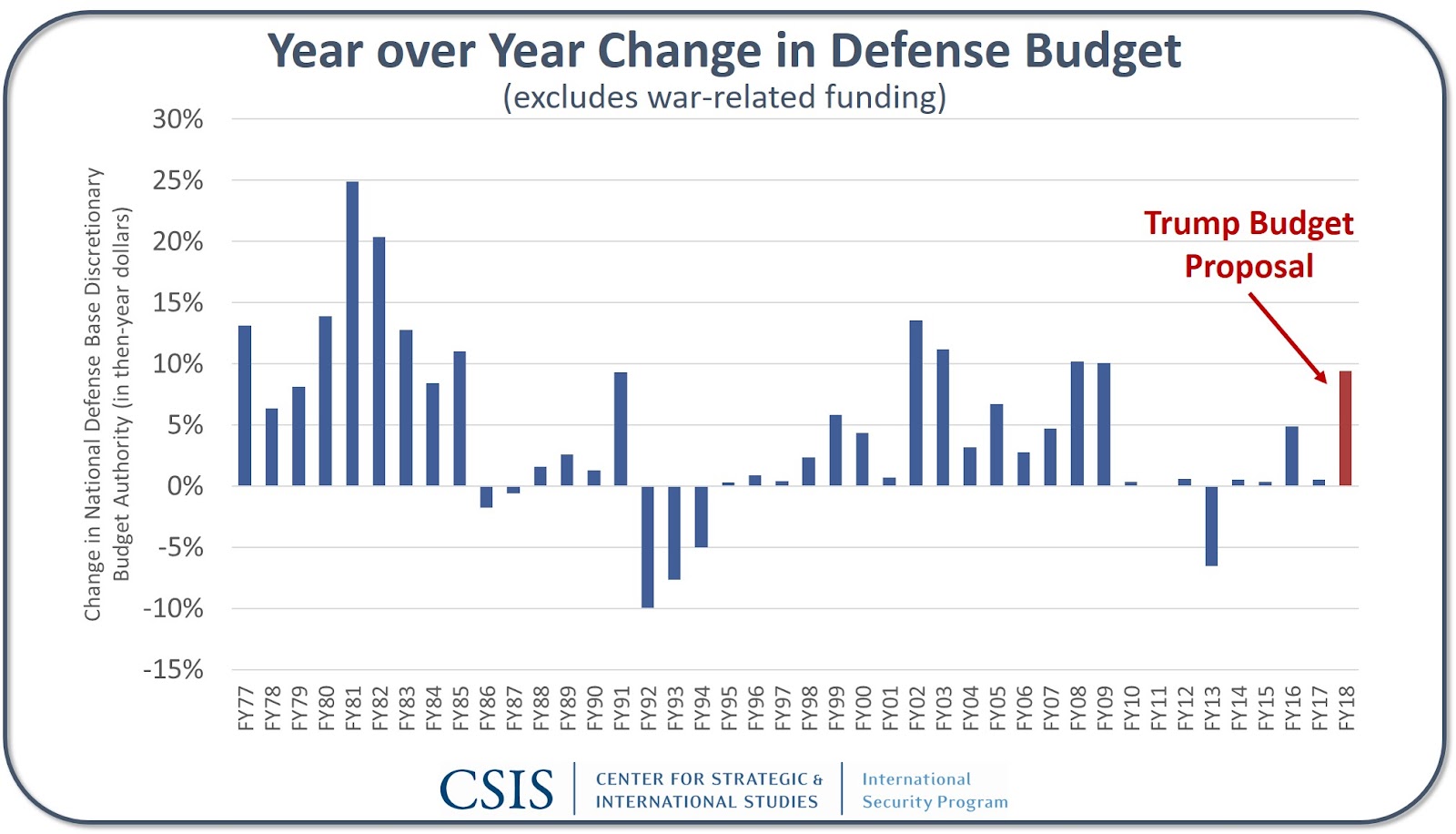 By Harrison’s count, since 1977, there have been 10 increases that were at least a little bit larger than what Trump has in mind.

We reached out to the White House and were still waiting for a response when we published.

Trump said his budget plan has one of the largest increases in defense spending in the country’s history. Looking strictly at money for the Pentagon’s base budget, Trump is calling for about a 10 percent hike in spending. But in the past three decades, there have been 10 years when the base defense budget has gone up more than what Trump has requested. In some years, the increase was more than double Trump’s.

The term "one of the largest" has some leeway, but the defense analysts we reached said while it is a significant increase, it is not remarkable.