Kevin McCarthy
stated on November 5, 2017 in an interview on CBS' "Face the Nation":
The Republican tax bill "lets every American keep more of what they earned."

Republican lawmakers have been working to energize support for their pending tax bill by arguing that it would have a broad-based, positive impact for American taxpayers.

On the Nov. 5 edition of CBS’ Face the Nation, House Majority Leader Kevin McCarthy of California joined the chorus.

Referring to his chamber’s tax bill, McCarthy said that "it lets every American keep more of what they earned."

This comment echoed what McCarthy had said a few days earlier, at the event where House Republican leaders officially unveiled the bill. "Every single American is going to keep more of what they earn," McCarthy said at the event.

However, both of McCarthy’s statements are misleading.

The analysis of the bill by the Joint Committee on Taxation, Congress’ nonpartisan arbiter of tax bills, does show that, on average, every income range will see a tax cut.

However, that’s not the same as saying "every American" will see a tax cut. Some will see an increase, perhaps because of changes in the bill that scale back the mortgage-interest deduction or the state and local tax deduction. 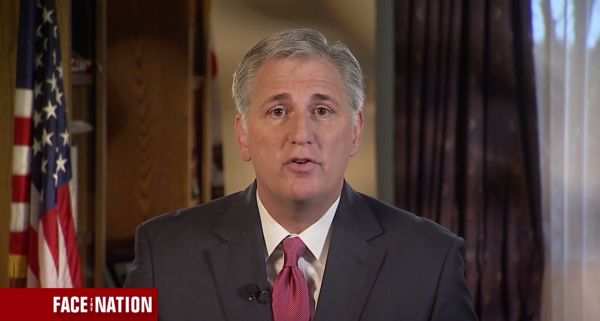 The committee’s analysis projects that, between 2019 and 2022, the Republican tax bill would cut taxes for each of the 11 income ranges into which it breaks down taxpayers. 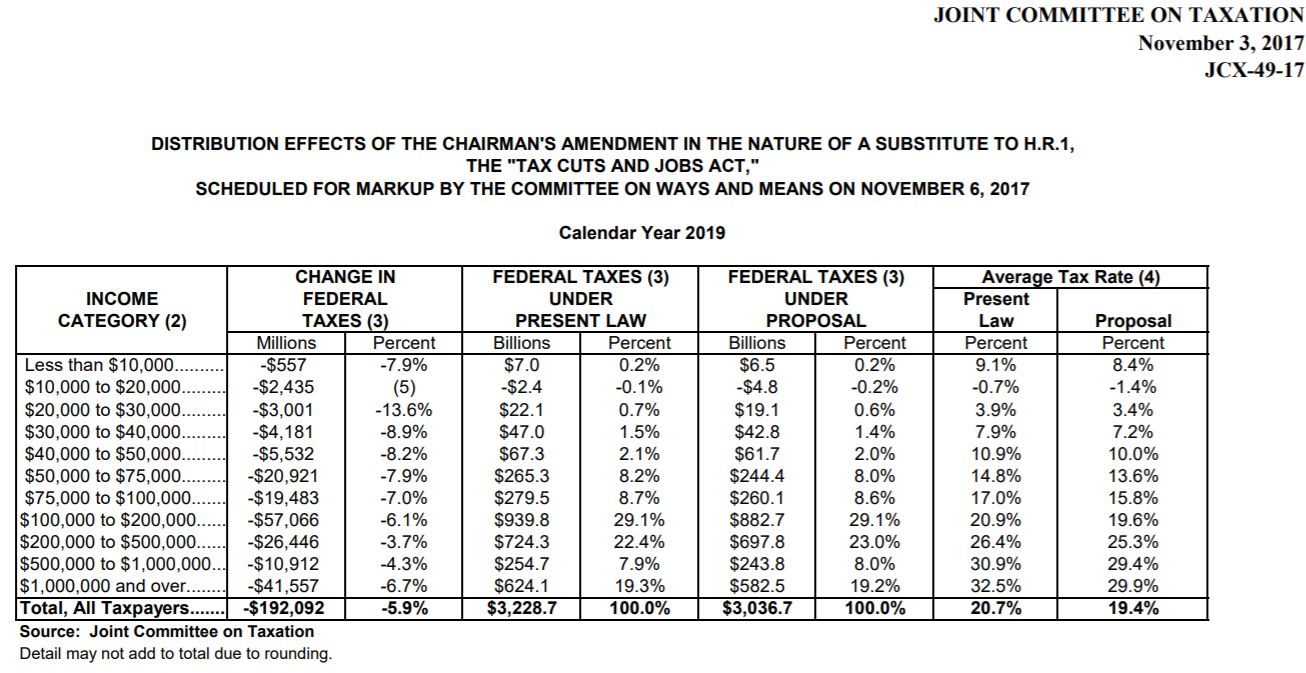 The tax cuts eventually disappear for some income groups

The joint committee found that by 2023, the tax cuts would disappear for groups with modest incomes.

For a sense of scale, households with an adjusted gross income of $40,000 or below account for somewhere around half of households, according to the Urban Institute-Brookings Institution Tax Policy Center.

These 2019 cuts show the general pattern for all income groups, but shouldn’t be taken as gospel for every individual taxpayer and family. The figures just mean that, when all the individual cuts and increases are added up, they cumulatively produce a decrease. However, some percentage of individuals in each income group may face higher taxes right away.

"Taxes go down on average for each income group in 2019, but that doesn’t mean that taxes go down for every single household," said Patrick Newton, a spokesman for the Committee for a Responsible Federal Budget.

One backer of the tax bill, Grover Norquist, explained this phenomenon more accurately when he wrote a column in the Washington Examiner. The headline of his article refers to how the bill "cuts taxes for all income levels." McCarthy didn’t word it that carefully.

So how many Americans could face tax increases under the GOP bill? Two days after McCarthy’s comment on Face the Nation, the Joint Committee on Taxation released data that provides us with a better idea.

That leaves 8 percent of tax filers seeing a tax increase of at least $100.

In other words, while most Americans would indeed see a tax cut or a minor increase in the first year, 8 percent, or roughly 14 million American households, would see an increase of at least $100. (We approximated the raw number using Tax Policy Center data.)

Meanwhile, the number of Americans facing a tax increase would grow over time.

The Tax Policy Center’s own analysis largely echoed what the joint committee found. In 2018, 7.3 percent of taxpayers would see a tax increase in 2018. By 2027, that percentage would rise to 26 percent.

When we checked with McCarthy’s office, they didn’t back away from his previous phrasing.

"This plan reduces tax rates for every American, delivering immediate relief on income taxes on income above the standard deduction," said spokesman Matt Sparks. "And throughout their lives, this bill will let every American keep more of what they earn because the deductions, preferences, and carve-outs that are being eliminated are available to taxpayers in only a small number of years, while the benefit of lower rates and higher standard deduction are available to everyone, every year."

McCarthy said the Republican tax bill "lets every American keep more of what they earned."

By the Joint Committee on Taxation's analysis, the tax bill does, on average, produce tax cuts for each of the 11 income groups it studied. But that’s not what McCarthy repeatedly said -- that it would produce a tax cut for "every American." Individual taxpayers’ situations will be affected differently by provisions in the bill, and for 2018 alone, the committee found that 8 percent of taxpayers would pay more in taxes. That translates to millions of Americans.

Kevin McCarthy, remarks on the release of the Republican tax bill, Nov. 2, 2017

Joint Committee on Taxation, "Distribution Effects Of The Chairman's Amendment In The Nature Of A Substitute To H.R.1, The Tax Cuts And Jobs Act," Nov. 3, 2017

Joint Committee on Taxation, "A Distribution of Returns by the Size of the Tax Change for the Chairman’s Amendment in the Nature of a Substitute to H.R. 1," Nov. 7, 2017

Email interview with Patrick Newton, spokesman for the Committee for a Responsible Federal Budget, Nov. 8, 2017