Nancy Pelosi
stated on October 12, 2017 in a tweet:
The state and local tax deduction is a major benefit for moderate-income households because "50% of households that claim State & Local Tax deduction make under $100K."

As Congress moved toward consideration of a major tax overhaul, House Minority Leader Nancy Pelosi, D-Calif., raised a warning about one element of President Donald Trump’s proposal -- ending the deduction for state and local tax payments.

"This is striking: 50% of households that claim State & Local Tax deduction make under $100K – & now @SpeakerRyan wants to throw it away," Pelosi tweeted on Oct. 12.

This is striking: 50% of households that claim State & Local Tax deduction make under $100K – & now @SpeakerRyan wants to throw it away.

Pelosi’s point is that the deduction helps a lot of middle- and lower-income taxpayers, meaning it should be preserved.

A reader wrote us to suggest that we take a closer look at this assertion, so we did. We found that Pelosi’s numbers are on target. But the suggestion that this deduction primarily helps lower-earning Americans misses the mark.

When we checked with Pelosi’s office, they cited data from the Government Finance Officers Association. A table in the group’s report does indeed say that 54 percent of households that claimed the deduction earned $100,000 or less.

But that’s more a reflection of how many households earn $100,000 or less, rather than an indication that the state and local tax deduction is a targeted benefit for lower earners.

Lower-income taxpayers are less likely to itemize their tax returns and therefore less likely to benefit from the state and local tax deduction, said Kim Rueben, a senior fellow and director of the state and local finance initiative at the Urban Institute-Brookings Institution Tax Policy Center. "But because there are so many more taxpayers in these income groups, they make up a majority of taxpayers claiming it," Reuben said.

As Reuben indicated, higher-income households are much more likely to take the deduction than lower-income taxpayers are.

But this is only part of the picture. Most other data shows the deduction skewing toward higher-income taxpayers.

According to the same report Pelosi’s office cited, between 91 percent and 93 percent of households earning $200,000 and up take the deduction. By contrast, 53 percent of taxpayers with between $75,000 and $100,000 in income used the deduction, and the lower income bands used it at rates significantly less than that.

Here’s a summary chart from the report: 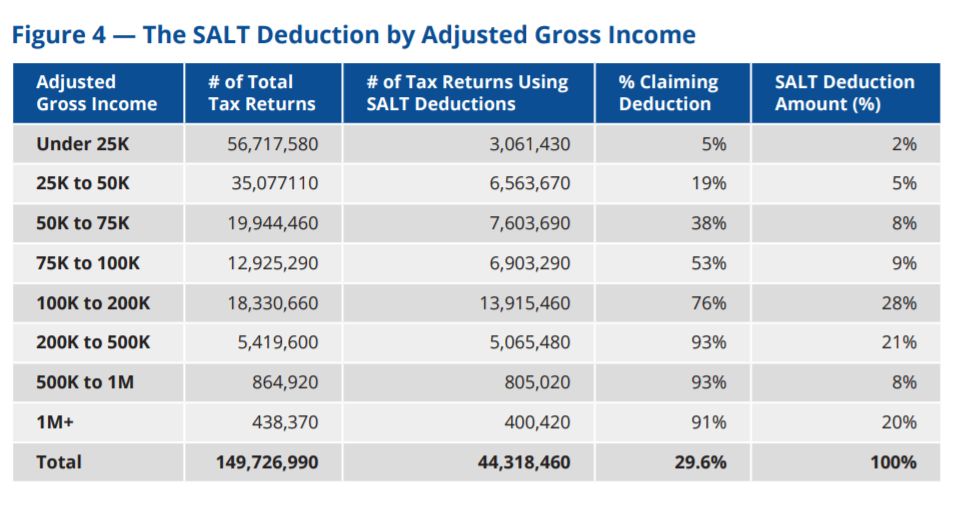 Second, the dollar amounts saved through deduction skew heavily toward the upper end of the income spectrum.

So, if anything, removing the deduction will disproportionately hurt higher earners.

According to the same report, households up to $100,000 in income accounted for about 23 percent of the dollar value of the deduction -- far from the majority implied by the statistic used in Pelosi’s tweet.

Indeed, almost 20 percent of the dollar amount saved from the deduction went to taxpayers with more than $1 million in income alone.

And the benefits at the upper end of the income spectrum aren’t just larger in an absolute sense, but they’re also bigger as a percentage of the taxpayer’s income.

Here’s the summary chart from the same report. 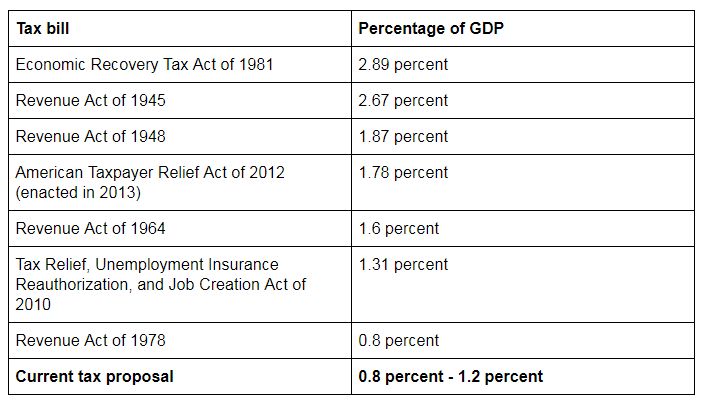 "So not only do the wealthy claim more of the deduction, they get more value for the deductions they do claim," Newton said.

When we presented this additional data to Pelosi’s office, a spokesman said that Pelosi’s tweets were intended to remind people that many moderate-income working families do benefit from the state and local deduction -- a reality often overlooked in the debate, he said.

"I think you have to note that even the comparatively lower utilization rate in the lower brackets amounts to millions and millions of households losing a deduction that is a pretty big deal in terms of their family budget," said Henry Connelly, a Pelosi spokesman. "Often, that gets lost when you go to the aggregate number of deduction value."

The data says that 54 percent of taxpayers who claim the deduction make $100,000 or less. But, in reality, this is a tax deduction that disproportionately benefits higher-income taxpayers -- not the group Pelosi highlighted in her tweet.

Pelosi's claim is accurate, but it comes with that caveat. We rate the statement Mostly True.

Email interview with Jared Walczak, senior policy analyst with the Center for State Tax Policy at the Tax Foundation, Oct. 20, 2017

Email interview with Patrick Newton, spokesman for the Committee for a Responsible Federal Budget, Oct. 19, 2017