As North Korea continues to try the West’s patience with a series of nuclear and missile tests, President Donald Trump is touting the success of tightening sanctions against the rogue nation.

Referring to a conversation he had with South Korean president Moon Jae-in, Trump tweeted on Sept. 17, "I spoke with President Moon of South Korea last night. Asked him how Rocket Man is doing. Long gas lines forming in North Korea. Too bad!"

Is it true that there are "long gas lines forming in North Korea"? We checked with several experts and reviewed the fragmentary news reporting out of Pyongyang.

Gasoline supplies do seem to be short in North Korea these days, and the White House provided one article that cited long lines in April. But the unusual nature of the country’s top-down system of control and its minimal levels of car ownership suggest the idea of "long gas lines" is exaggerated.

I spoke with President Moon of South Korea last night. Asked him how Rocket Man is doing. Long gas lines forming in North Korea. Too bad!

The White House told us that the remark referred to the sanctions package against North Korea approved by the United Nations on Sept. 11 that, in part, "reduces about 30 percent of oil provided to North Korea by cutting off over 55 percent of refined petroleum products."

It’s unclear whether these particular sanctions could have acted quickly enough to show up on North Korean streets within a week. But they did provide one article citing long gas lines in North Korea, well before the most recent round of sanctions. It was an Associated Press dispatch from April that said in the wake of the initial gas shortage, "lines at other stations were much longer than usual and prices appeared to be rising significantly."

There is strong evidence that North Korea has been facing gasoline shortages this year.

NKNews, an independent news outlet with operations in Seoul, London and Washington, reported that petroleum and diesel prices are "far higher than usual" in North Korea this year.

The April price spike began amid "rumors" that China had been considering a halt of all crude oil sales, NKNews reported. The publication also reported that the government in September imposed "new restrictions against customers filling up jerry cans to buy extra supplies, while a number of gas stations were reported as being closed in the city." All told, gas prices have more than doubled this year, data from NKNews shows.

So how can gasoline be in short supply in North Korea without many signs of lines forming at the pump? To explain, let’s take a look at the hermit kingdom’s unusual relationship with the automobile. 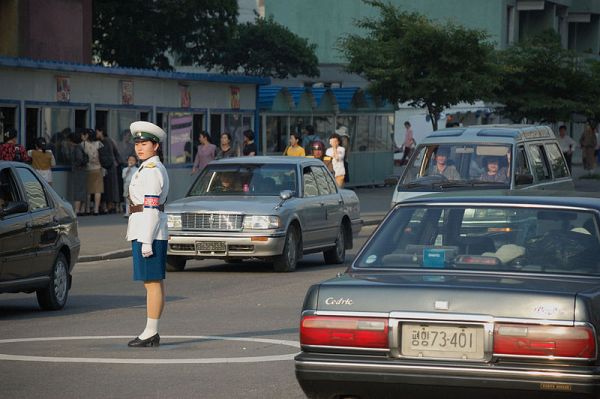 A "traffic lady" in Pyongyang, North Korea, in 2008. (Wikimedia commons)

Personal automobiles in North Korea are rare. They are primarily for government or military use, or by the very richest members of the elite. Private citizens typically can’t own cars unless they have government ties.

There is some anecdotal evidence that the number of cars in North Korea has risen in recent years, possibly due to a spike in the registration of privately purchased vehicles under the name of state enterprises, according to the publication DailyNK. But car ownership rates remain low in comparison to most countries.

The combination of legal obstacles and high costs put cars out of the reach of ordinary North Koreans, who live in one of the world’s poorest nations. So, despite the increase in automobile use, the Associated Press reported from the capital of Pyongyang in December 2015 that "it’s unusual to have more than a dozen or so cars waiting behind a red light at any time of day, in any part of the city. At night, the roads remain virtually empty."

The size of the vehicle fleet in Pyongyang is so modest that it’s easy to spot examples from a 1974 purchase of Volvo 144 sedans that are still puttering around the city. (North Korea never ended up paying for them, and Sweden is reportedly still tabulating interest on the purchase in the vain hope that the debt will be settled one day.) 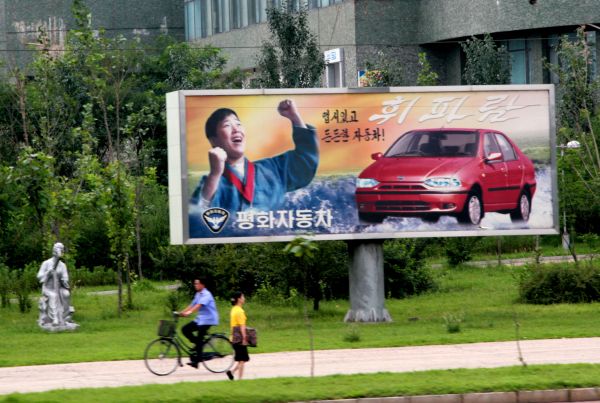 A billboard for Pyonghwa Motors in a Pyongyang park in 2007. The ad shows a Pyeonghwa Hwiparam, the North Korean version of the Fiat Siena. (Wikimedia commons)

Not that North Korean drivers would have many places to go if they did have access to cars. By land area, North Korea is about 20 percent bigger than South Korea, yet it has less than 1 percent of South Korea’s paved-road mileage. Even adding in unpaved roads, the North has only 26 percent of the road mileage that the South has.

"Public transport in the major cities is done by electrically driven buses, and many trucks in the countryside are converted to wood burning," said Erik van Ingen Schenau of the China Motor Vehicle Documentation Center in France. "Outside Pyongyang, people have no cars, and the cars in Pyongyang are (driven by) the upper class, except for some taxis and government vehicles."

Because of this, gas lines in North Korea mean something different than ones in the United States.

"They indicate not enough supply for non-regime elite ‘luxury’ use," said Joseph DeThomas, a former ambassador who now teaches at Penn State’s School of International Affairs. "It is not meaningless, but it may be less meaningful than would shortages of diesel for ground transport, kerosene for heat and air transport, and heavy fuel oil for power generation, industry and other similar needs."

North Korea does appear to be facing a gasoline crunch, with prices rising in recent months. But experts we contacted, along with media reports that appeared in response to Trump’s tweet, uncovered little evidence of lines at the pump, likely because the North Korean government exerts such control over gasoline and automobiles that the impact of such shortages are far narrower than they would be in the United States.

We rate the statement Half True

Email interview Scott Snyder, senior fellow for Korea studies and director of the program on U.S.-Korea Policy at the Council on Foreign Relations, Sept. 18, 2017

Email interview with Robert S. Ross, professor of political science at Boston College and associate of the Fairbank Center for Chinese Studies at Harvard University, Sept. 18, 2017