Texas Gov. Greg Abbott says that apprehension of border-crossing immigrants and drugs have increased dramatically from last year, justifying his decision to step up National Guard troops assigned to the Texas-Mexico border in keeping with President Donald Trump’s desires.

"People must understand the math behind what is going on and that is this: And that is from this March, being last month, compared to last year, there’s been a more than 200 percent increase in the number of people who are apprehended coming across the border. And I’ll tell you this, there’s been more than a 200 percent increase in apprehension(s) of heroin coming across the border. This is real dangerous stuff that we must get control of before we further lose control of our border."

We were curious about those stats, so we asked the governor’s campaign for backup. We didn’t hear back.

Next, we turned to government-posted border and heroin apprehension figures, focusing first on apprehensions of people.

Apprehension counts--often cited as an indication of illegal border crossings--are regularly posted by Customs and Border Protection, the part of the U.S. Department of Homeland Security primarily responsible for regulating the movement of people and goods across U.S. borders.

Generally, the number of people detained in the Border Patrol’s Southwest region, which runs from Brownsville, Texas, to San Diego, Calif., has mostly decreased since 2005, according to a CBP document we checked that provides such details for every year since 2000: 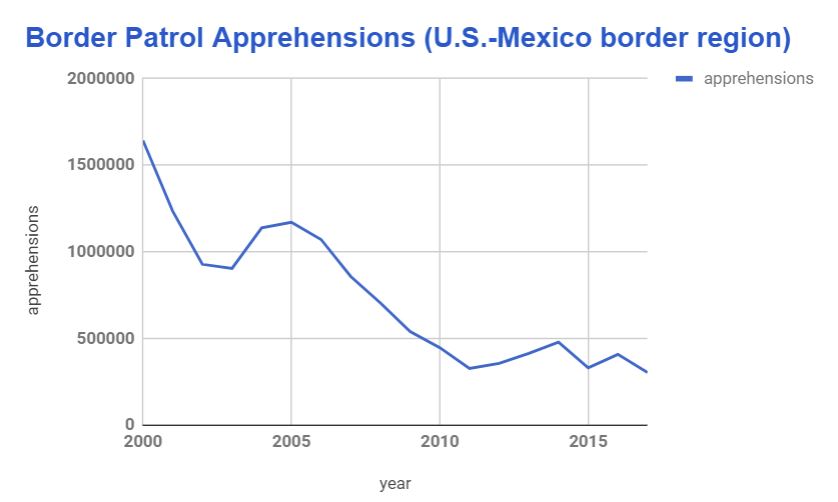 But Abbott’s claim to KTSA was limited to comparing the number of individuals apprehended near the border in March 2018 with the tally of individuals detained the same month the year before.

We confirmed a more than 200 percent difference in apprehensions for the chosen months. That’s partly because the 2017 count was historically low. 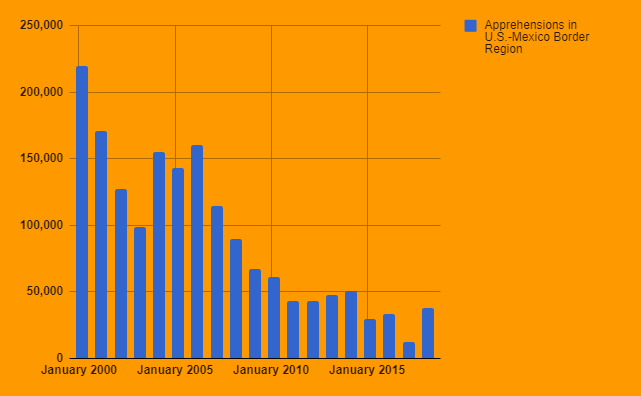 We also asked Carlos A. Diaz, chief of CPB’s Southwest Branch, to address the count of March 2018 apprehensions singled out by Abbott compared with border apprehensions the same month of the year before.

By email, Diaz replied: "The increase and decrease in entries during any given period is determined by ‘push/pull’ factors," which, he said, can seem bigger if you compare shorter time periods. "These factors," Diaz wrote, "vary by country of origin (push) and by perceived policy changes in the U.S. (pull). In 2017, there was the perception by individuals wishing to enter illegally into the U.S. that there would be immediate policy changes to how the U.S. handled illegal immigration. This perception was due in large part to the newly elected President Trump’s proclamation on enforcing immigration laws."

Diaz, asked if CBP believes there’s been a fresh surge in people illegally trying to enter the U.S. from Mexico, reminded us of the big percentage differences between apprehensions in March 2017 and March 2018. In his April 2018 reply, he further said: "The current entry numbers are following statistical norms when compared to years 2014, 2015 and 2016."

Next, we sought information speaking to Abbott’s heroin statistic.

Mexico remains the primary smuggling route for increased heroin reaching the U.S. and, the Drug Enforcement Administration says, opium poppy cultivation in Mexico has increased in recent years, according to the agency’s 2017 National Drug Threat Assessment.

That report says federal seizure data also indicate a shift of heroin transportation through the U.S.-Mexico border and away from commercial air routes, "the method most commonly used by traffickers of South American and Asian heroin." In 2008, the report states, 47 percent of CBP heroin seizures were made from air conveyances and 49 percent were made on land. In 2016, the report says, 14 percent were made in the air and 82 percent on land. "This increase is primarily due to the more prominent role Mexican traffickers have taken in the United States heroin market, and also partially due to increased law enforcement presence on the Southwest Border," the report says.

Our look for figures specific to Abbott’s claim led us to a couple of CBP charts--one showing the Border Patrol lately on pace to capture fewer pounds of heroin than before and the other indicating a national spurt in heroin seizures by the agency.

In the first six months of fiscal 2018, through March 2018, the Border Patrol reported seizing 263 pounds of heroin near the southern border--which, we gauged, breaks out to 28 percent of the 953 pounds of heroin seized along the border by Border Patrol agents through the entire previous fiscal year, from October 2016 through September 2017.

The second chart states that CBP’s Office of Field Operations reported seizures of 2,479 pounds of heroin in the first half of fiscal 2018--which breaks out to nearly 70 percent of the 3,626 pounds of heroin seized by that office through all of fiscal 2017, possibly an indication that far more heroin will ultimately be seized through the full year. A note: We saw no indication on the chart of where the office’s seizures took place--on the border or elsewhere. 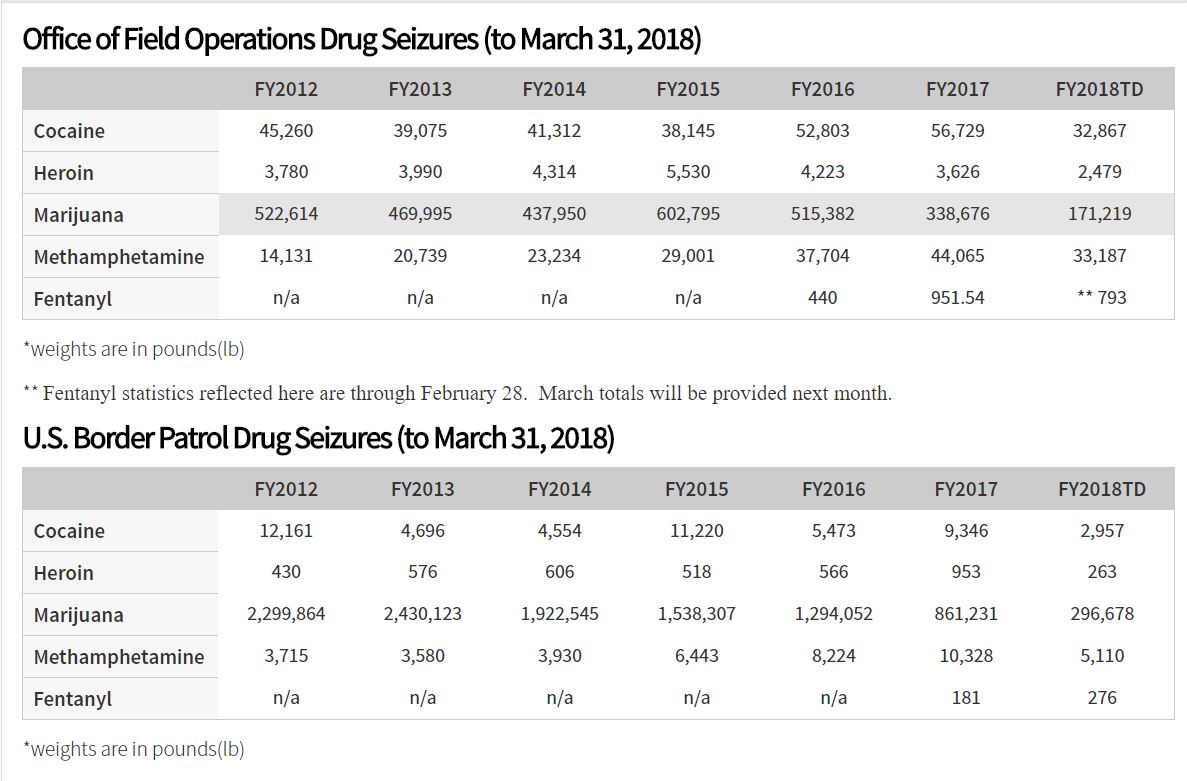 To our inquiry, Melvin Patterson, a DEA official, emailed a breakdown showing annual heroin seizures in the border region by law agencies, though the information wasn’t up to date. According to the breakdown, the 2,443 kilograms in heroin seizures along the border in the fiscal year running through September 2016 ran short of the 2,855 kilograms seized there the previous fiscal year; it also ran behind the 2,559 kilograms seized in fiscal 2014. Patterson said the government had yet to post relevant data for October 2017 and beyond.

It could be that Abbott reached his seizures’ percentage based on information from the Texas Department of Public Safety. We queried DPS, but the agency didn’t respond.