Donald Trump
stated on February 20, 2018 in a tweet:
"I have been much tougher on Russia than Obama, just look at the facts. Total Fake News!"

Amid swelling evidence of Russia's interference in the 2016 presidential election, President Donald Trump pushed back against critics who say he's given the Kremlin a free pass.

In one tweet on Feb. 20, Trump said, "I have been much tougher on Russia than Obama, just look at the facts. Total Fake News!"

I have been much tougher on Russia than Obama, just look at the facts. Total Fake News!

The tweet immediately drew guffaws among media commentators and on social media, who quickly plucked examples of Trump downplaying evidence of a far-reaching effort by Russia to meddle in the election. (Just a day earlier, we gave Trump a Pants on Fire for tweeting that he "never said Russia did not meddle in the election.")

When we looked at the past decade of U.S.-Russia policy, however, we found a more nuanced picture. Tougher government policies implemented under President Barack Obama have largely continued under Trump, even though they were often overshadowed — and perhaps undercut — by Trump’s friendly remarks and tweets toward Russia and President Vladimir Putin.

The consensus among experts is that Obama was more forceful than Trump has been to date on countering election meddling.

"The key difference from Obama was (Trump’s) unwillingness to take the meddling issue head on," said Stephen Sestanovich, a senior fellow for Russian and Eurasian studies at the Council on Foreign Relations.

As we’ve noted in previous fact-checks, the Obama administration took actions before and after Election Day. Prior to the election, the Obama administration publicly named the Russian government as the culprit, confronted Russian President Vladimir Putin in person, and worked to secure U.S. election infrastructure — all while intelligence agencies investigated the issue.

But the Obama administration’s most significant retaliatory measure against Russia came after Trump’s electoral win.

On Dec. 29, 2016, Obama ordered 35 Russian diplomats and suspected intelligence agents to leave the United States, and he also imposed narrow sanctions on some Russian individuals and organizations.

Trump, on the other hand, has cast doubt on Russia’s election meddling and repeated Putin’s denials of his government’s involvement.

"The Trump administration has repeatedly tried to undermine the credibility of the FBI and intelligence agencies in their investigation and assessment of the threat to the integrity of U.S. elections by Russian operatives," said Yoshiko Herrera, a political science professor at the University of Wisconsin-Madison.

Herrera added that Special Counsel Robert Mueller is looking into whether the Trump administration crossed the line into obstruction of justice by trying to impede the investigation of the Russian threat to the American electoral system.

While some experts noted that Trump signed a law calling for new sanctions against Russia in response to its interference with the election, they added that the legislation was hardly the product of Trump’s hardline advocacy. Congress largely passed the bill — with veto-proof majorities — in response to Trump’s downplaying of the meddling question and his seeming interest in lifting sanctions against Russia, Sestanovich said.

When it came time to sign the bill into law in August, Trump did so grudgingly. He expressed significant reservations, saying it was "seriously flawed" because it usurped the executive branch’s negotiating authority.

Matthew Kroenig, an associate professor in the Department of Government and School of Foreign Service at Georgetown University, said Trump had a point with his reservations about the legislative package, noting that the Obama administration made similar arguments that congressional sanctions against Iran infringed on the executive's authority to set foreign policy.

Several experts said the White House has been hesitant to implement the sanctions. Sestanovich characterized its implementation as "slow and half-hearted." In late January, Treasury Secretary Steven Mnuchin told lawmakers the administration would apply sanctions to a new list of Russian oligarchs and senior government officials.

"The Trump administration didn’t provide the list of who they apply to until very late," Herrera said. "That’s a clear sign of foot-dragging by the White House."

Susanne Wengle, a political science professor at the University of Notre Dame, agreed that Trump "has not been proactive or voiced strong opposition to Russian involvement in U.S. politics," while Obama did.

However, she noted that the Trump administration has not gone so far as to reverse Obama-era laws and regulations, including the Magnitsky Act, which targeted high-ranking Russians with sanctions. 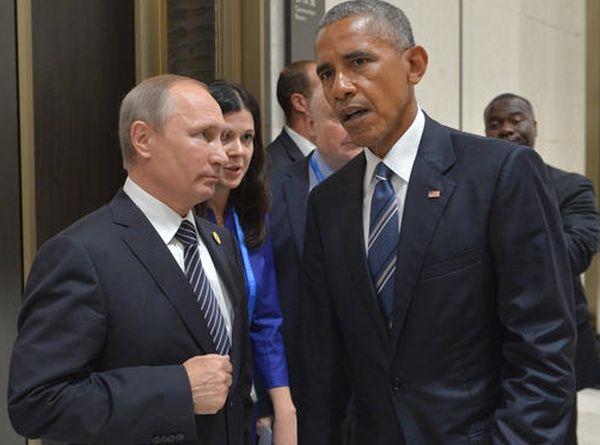 The White House provided some examples of policies broader than the reaction to election meddling. Judging the tweet based on the administration's geopolitical policies makes the analysis a bit more complicated.

There’s a crucial dividing line for U.S. policy toward Russia — early 2014, when Russia annexed the Ukrainian region of Crimea. Before that, the United States sought common ground with Russia. After that, Russia was seen in a more adversarial way.

During the early years of Obama’s presidency, and especially during the Russian presidential interregnum of Dmitry Medvedev, the United States sought a "reset" with Russia and managed to hammer out several accomplishments, including a nuclear-arms deal.

"Obama's first national security strategy only mentioned Russia as a potential partner, never as a possible threat," Kroenig said. "He promised in the famous ‘hot mic’ episode that he would have ‘flexibility’ to make concessions on missile defense after the (2012) election. He refused to intervene in Syria in part because his team feared direct conflict with Russia. He refused to provide lethal aid to Ukraine fearing escalation with Russia. And he did not develop a serious strategy to deter the threat of Russian nuclear ‘de-escalation’ strikes."

However, an increase in conflict between the two countries, heightened by the return of Putin to the presidency in 2012, prompted skepticism about whether a genuine reset was feasible. Ultimately, the reset died out entirely after the Crimean annexation in 2014.

In a very narrow sense, Trump has a case. "If you compare current 2018 U.S. policy to U.S. policy during Obama’s first term, then the U.S. is clearly ‘tougher’ on Russia now," said Dan Nexon, an associate professor of government and foreign service at Georgetown University.

These included a rapid set of sanctions on people and enterprises in March 2014 following the Crimean annexation, and sector-based sanctions on Russia in July 2014 following continued Russian military activities in eastern Ukraine, said Anders Åslund, a senior fellow at the Atlantic Council.

Later, Obama’s actions included the expulsion of Russian diplomats in December 2016, the closing of Russian compounds, and a variety of statements critical of Russia and Putin.

Trump’s rhetoric has consistently indicated warmth and trust toward Russia and Putin, and Trump has also sent mixed signals about the U.S. commitment to NATO.

On the other hand, post-2014 U.S. policy aimed at Russia has chugged forward in important ways since Trump became president — despite his rhetoric.

"The rest of the executive branch and Congress have actually taken a few tough stands against Russia during the last year," said Susan H. Allen, director of the Center for Peacemaking Practice at George Mason University’s School for Conflict Analysis and Resolution.

Among them, Kroening said, are a boost in funding for the European Reassurance Initiative, a security program that began under Obama; the development of new, low-yield nuclear capabilities to deter Russian nuclear attack; upgrades for missile defenses; and an approval of Montenegro’s bid to join NATO, which had been in the works for years. The Trump administration also slapped new sanctions on five Russians and Chechens over human rights abuses.

Trump’s two highest-profile acts challenging Russia were his cruise missile attack against Syria’s Bashar al-Assad, a Russian ally, and his approval of lethal arms sales to Ukraine. In both of those cases, Trump went further than Obama did, though it remains to be seen how thoroughly the administration will follow through on both developments.

To the extent that Trump’s policies against Russia have met or exceeded Obama’s post-2014 policies, the credit goes more to his agencies and Congress, experts said. These policies are ones that "hawkish military types in his orbit like, and were not likely from his own initiative," said Wengle, the University of Notre Dame professor.

Trump said, "I have been much tougher on Russia than Obama, just look at the facts. Total Fake News!"

There’s broad agreement that on election meddling, Obama’s actions — while arguably insufficient to the threat at hand — were stronger than Trump’s. On a broader geopolitical level, there has been a significant degree of consistency between the Obama and Trump administrations in actual U.S. policy, and even a few examples where Trump has gone further than Obama did. That said, Trump’s own record of Russia- and Putin-friendly comments have sent contrary messages about U.S. policy toward Russia.

PolitiFact Rating:
Mostly False
"I have been much tougher on Russia than Obama, just look at the facts. Total Fake News!"
Donald Trump
President
https://twitter.com/realDonaldTrump/status/965943827931549696?ref_src=twsrc%5Etfw&ref_url=http%3A%2F%2Fcms.politifact.com%2Ftruth-o-meter%2Fstatements%2F2018%2Ffeb%2F20%2Fdonald-trump%2Fhas-donald-trump-been-much-tougher-russia-barack-o%2F

PolitiFact, "Donald Trump says Barack Obama 'did nothing' about Russia prior to Election Day,"  July 10, 2017

Email interview with Yoshiko Herrera, professor of political science at the University of Wisconsin-Madison, Feb. 20, 2018