Viral image
stated on February 18, 2018 in on the Internet:
In most states, you can buy an assault rifle with no proof of ID, but in every state, you need proof of ID to vote.

After a teenage gunman killed 17 people at a high school in Parkland, Fla., Americans of all political persuasions flocked to social media to express their views on gun policy.

On the pro-gun control side of the argument, Areva Martin, an author and TV commentator, tweeted a graphic that showed in most of the country, it is harder to vote than it is to buy an assault rifle.

She shared the following graphic with the comment, "Just let this sink in! #FloridaSchoolShooting #Florida #GunReformNow."

However, a closer look at both gun policy and election law suggest some important caveats that the graphic leaves out. (Martin did not reply to an inquiry from her representative.)

Where the graphic came from

Unlike many viral images we see, this one provided its sourcing.

It cited an article by Alex Seitz-Wald in Salon.com and the liberal Center for American Progress. The chart was put together from elements of the Salon article by Adam Peck, an editor with the website ThinkProgress, which is affiliated with the Center for American Progress. Peck told PolitiFact that the graphic was originally created to be embedded in a separate Think Progress article.

The accompanying ThinkProgress article "was our opportunity to provide readers with the kind of information and nuance that simply don't work in a visual capacity," Peck said. "Obviously, the pitfall is that those graphics can be easily divorced from their companion articles, losing whatever nuance we set out to provide."

Also important to note: The Salon article, the ThinkProgress article and the graphic were all published in 2013. (Seitz-Wald has been at NBC News since 2014.)

So the underlying data is five years old.

The meme’s re-emergence means there’s been a game of telephone, with notable context falling by the wayside. 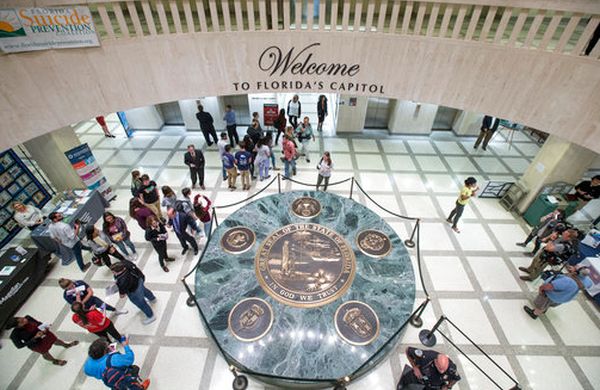 Student survivors of the shooting at Marjory Stoneman Douglas High School gather at the capitol in Tallahassee, Fla., on Feb. 21, 2018. (AP/Mark Wallheiser)

You wouldn’t know it from the graphic, but whether an ID is required for a gun sale depends on who is making the sale.

Where the meme has a point is that in the states that didn’t pass a tougher law, unlicensed private sellers are exempted from having to complete the background check process. Commonly, such unlicensed sellers operate from gun shows or flea markets, although a licensed dealer selling from a show would have to run the background check.

"For anyone who thinks he or she might not pass a background check, or is looking to circumvent any waiting period, they can bypass both in a majority of states," said Peck, the graphic's creator.

As Seitz-Wald noted in his article, states can add their own restrictions on top of these requirements. At the time the article was written, only about a third had done so. Since then, Oregon and Washington have begun requiring background checks (and thus an ID) on all gun sales, including private transfers.

That matters. While it is possible in many states to buy a firearm without an ID by seeking out an unlicensed seller, such purchases account for a fraction of all sales. Gun shops and other types of brick-and-mortar stores — where background checks are required — account for a majority of purchases.

In other words, it’s certainly possible to purchase a gun without an ID in many states, but in reality, a large majority of purchases are done with IDs and background checks.

The graphic is more problematic on the point that in no state can you vote without proof of ID.

It’s certainly true that a number of states have requirements for voters to hand over a government-issued photo ID in one of just a few categories, such as driver’s licenses. The strictest of these include Georgia, Indiana, Kansas, Mississippi, Tennessee, Virginia and Wisconsin, according to the National Conference of State Legislatures.

Other states also have ID requirements to vote, but in many cases, they allow easier-to-obtain paperwork, including documents without a photograph in some cases. Some of the valid documents, depending on the state, include student ID cards, utility bills, bank statements, paychecks, government checks, Medicare or Medicaid cards, employer ID cards, or a bank or debit card.

So the notion that every state requires an ID to vote is incorrect.

If the graphic had said that an ID is required to register to vote, it would have been somewhat more accurate. Under the federal Help America Vote Act, every state must request identification when registering first-time voters who did not register in person and did not provide identification when filling out the mail-in registration form. For these voters, a wide variety of documents are accepted for registration; many states allow some of the non-photo IDs cited above to serve that purpose.

The viral image said that in most states, you can buy an assault rifle with no proof of ID, but in every state, you need proof of ID to vote.

It is indeed possible to buy an assault rifle without an ID if you go to a gun show — but the graphic neglects to mention that these sales are the exception rather than the rule. A significant majority of gun purchases are made in transactions that require ID and a background check.

As for the voting claim, some states have imposed strict photo ID laws at the voting booth. However, the graphic ignores that about one-third of states require no ID at all to vote, and that many of those that do require identification allow a range of documents to serve that purpose, including student IDs, utility bills and debit cards.

PolitiFact Rating:
Mostly False
In most states, you can buy an assault rifle with no proof of ID, but in every state, you need proof of ID to vote.
Viral image
on the Internet
https://twitter.com/ArevaMartin/status/965236419433082880