Laurence Tribe
stated on March 2, 2018 in a tweet:
President Donald "Trump’s latest set of sanctions against companies and countries benefiting North Korea includes every nation but one making shipments to (North Korea). The one nation Trump exempted from his punitive ban was . . . wait for it . . . drumroll: Russia."

Sightseeing boats dock on the Yalu River, which serves as the border between China, in foreground, and North Korea, in background, on Sept. 9, 2017. (AP/Emily Wang)

A few days after the United States announced stepped-up sanctions against entities doing business with North Korea, Laurence Tribe, a prominent Harvard University law professor, tweeted what he saw as an anomaly -- one that benefited the country at the heart of Robert Mueller’s investigation.

"Trump’s latest set of sanctions against companies and countries benefiting North Korea includes every nation but one making shipments to (North Korea). The one nation Trump exempted from his punitive ban was ... wait for it ... drumroll: Russia. How in the world did you guess?"

Trump’s latest set of sanctions against companies and countries benefiting North Korea includes every nation but one making shipments to NK. The one nation Trump exempted from his punitive ban was . . . wait for it . . . drumroll:
Russia. How in the world did you guess?

The notion that Russia might be helping North Korea evade sanctions has been widely speculated, and on March 3, the Washington Post ran a detailed story alleging that North Korea had essentially been laundering coal through Kholmsk, an obscure port in eastern Russia, for sale elsewhere.

A reader asked us to take a look at Tribe’s tweet, so we did. Experts told us that Tribe has a point, but that he had garbled some aspects of his message.

What the U.S. government did

The sanctions are the latest round in an ongoing effort to isolate North Korea for its continued pursuit of nuclear weapons, as well as missiles to deliver them.

On Feb. 23, 2018, the U.S. Treasury Department’s Office of Foreign Assets Control announced what it said were "the largest North Korea-related sanctions" to date, "aimed at disrupting North Korean shipping and trading companies and vessels."

Specifically, the announced sanctions targeted "one individual, 27 entities, and 28 vessels located, registered, or flagged in North Korea, China, Singapore, Taiwan, Hong Kong, Marshall Islands, Tanzania, Panama, and Comoros. Under the sanctions, the department said, "any property or interests in property of the designated persons in the possession or control of U.S. persons or within the United States must be blocked, and U.S. persons are prohibited from dealing with any of the designated parties."

The department said the sanctions were enacted "consistent with the North Korea Sanctions Policy and Enhancement Act of 2016 as well as the Countering America’s Adversaries Through Sanctions Act of 2017." 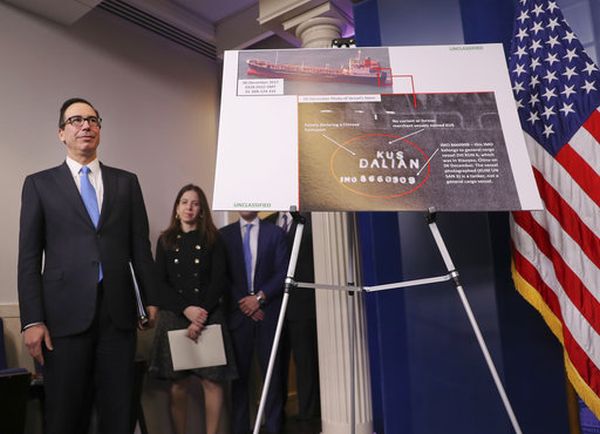 Are Russian entities included in the newest sanctions?

Russia was implicated, but not sanctioned directly, in the Feb. 23 announcement.

The Treasury Department designated a Taiwanese citizen, Tsang Yung Yuan, for, among other things, having "coordinated North Korean coal exports with a Russia-based North Korean broker." In 2017, the department said, Tsang and Marshall Islands-based Kingly Won International Co., Ltd., "attempted to engage in an oil deal valued at over $1 million with the Russian firm Independent Petroleum Company."

The sanctions announcement also cited another suspected transaction involving Russia that involved the offloading of fuel oil from an unnamed Russian vessel. For this transaction, the Korea Samma Shipping Company, a North Korean-owned firm, and its oil tanker SAM MA 2 were specifically targeted in the new round of sanctions.

So Tribe has a point that despite such allegations of Russian involvement, there were no Russia-flagged vessels or Russian-owned companies specified in this round of sanctions.

However, experts offered several concerns about what Tribe tweeted.

• Sanctions of these sort are issued as information allows. Just because no Russian entities are on the Feb. 23 list doesn’t mean there won’t be in the future -- or that there haven’t been in the past.

Instagram posts
stated on July 31, 2022 in a post
“China threatens to shoot Nancy Pelosi’s plane down if she visits Taiwan.”

"The most recent sanctions list basically contains the names of firms that U.S. intelligence knows or thinks are involved in sanctions busting activities," said Stephan Haggard, director of the Korea-Pacific Program at the University of California-San Diego. As further intelligence is gathered and confirmed, that could change.

Indeed, it’s important to note that the Trump administration has previously targeted Russian firms for North Korea-related sanctions, just not in this round.

The Russian company cited above -- the Independent Petroleum Company -- along with one of its subsidiaries, AO NNK-Primornefteproduct, have already been sanctioned during Trump’s tenure in the White House. They were sanctioned on June 1, 2017, for suspicion of being "involved in circumventing North Korean sanctions."

Trump has also publicly expressed concern about Russian actions in regard to North Korea. Shea Cotton, a research associate at the Monterey Institute of International Studies’ James Martin Center for Nonproliferation Studies, said that one of the few times he recalls Trump saying something negative about Russia was on the topic of North Korea sanctions.

"Russia is not helping us at all with North Korea," Trump said during an Oval Office interview with Reuters in January 2018. "What China is helping us with, Russia is denting. In other words, Russia is making up for some of what China is doing."

• Tribe’s wording was imprecise. Tribe tweeted that Trump had "exempted (Russia) from his punitive ban," but in reality, the language of the sanctions doesn't affirmatively "exempt" Russia.

"The term ‘exemption’ is wrong because the designation process goes after specific individuals, entities and ships," Haggard said. "There are no ‘exemptions.’"

Indeed, this round of sanctions operated entirely below the country level.

Tribe also referred to countries making "shipments to" North Korea, but many of the allegations of sanctions-busting activity has involved taking North Korean products and "laundering" them for sale elsewhere.

When we reached out to Tribe, he said, "I meant ‘to or from’ and was using ‘exempted from’ to mean ‘not included in’ or ‘excluded from.’"

• There may not be anything nefarious about why Russian entities didn’t make this list. Joseph DeThomas, a former diplomat and a professor at Penn State’s School of International Affairs, said that he, too, noticed the absence of Russian entities from the list. But he added that it would be wrong to assume that a desire to protect Russia is the reason why.

"There are plenty of benign-ish explanations which could account for this," he said. "It could be that the administration believes it can get Russia to comply with these without the need for sanctioning Russian entities. Or perhaps it believes Russia is making a good faith effort at enforcing these domestically and believes unilaterally sanctioning Russian entities would undermine Russian cooperation. It could also be that the administration has yet to obtain firm evidence regarding which Russian entities are involved and doesn’t want to do anything until they catch someone in the act."

In response, Tribe called such speculation "quite empty and says nothing I’d not already considered."

Tribe said, "Trump’s latest set of sanctions against companies and countries benefiting North Korea includes every nation but one making shipments to (North Korea). The one nation Trump exempted from his punitive ban was . . . wait for it . . . drumroll: Russia."

The most recent set of sanctions doesn’t specifically target any entity linked to Russia. However, sanction lists are dependent on intelligence findings, and when the U.S. government had intelligence relevant to sanctions-busting, the Trump administration has slapped sanctions on Russian entities in the past.

In addition, while this sanctions list targeted violators, it didn’t proactively "exempt" any countries (something Tribe acknowledges). Finally, experts offered a variety of potential alternative explanations beyond Trump doing this to protect Russia.

The Independent, "Russia 'has repeatedly supplied fuel to North Korea in violation of sanctions,'" Dec. 29, 2017

Email interview with Stephan Haggard, director of the Korea-Pacific Program at the University of California-San Diego, March 5, 2018