Donald Trump
stated on April 30, 2018 in a press conference:
"In seven years that (nuclear) deal will have expired, and Iran is free to go ahead and create nuclear weapons."

President Donald Trump has until May 12 to decide whether to continue waiving sanctions against Iran under the 2015 agreement that rolled back the country’s nuclear program.

At an April 30 press conference, Trump said pulling out of the deal would send the right message on American policy.

Trump is incorrect about the expiration date.

The deal, known as the Joint Comprehensive Plan of Action, puts a cap on enriched uranium until 2030, or 12 years from now. After that, other agreements limit nuclear weapons development in Iran.

A focus on fuel

A full nuclear weapons program needs fuel for a bomb, a warhead, and a way to deliver the warhead, such as a missile or a plane.

"By far the most important and the most difficult step is producing the fuel," said Matthew Kroenig at Georgetown University’s School of Foreign Service. "That’s why the Obama administration wanted to limit Iran’s capacity to enrich uranium. And it’s why it was so important to Iran to have the limits end after 15 years."

Under the deal, Iran gave up 97 percent of its stockpile of enriched uranium. It also lost 14,000 of its 20,000 centrifuges, the machines used to enrich uranium, and it agreed to only enrich uranium to a level unsuitable for weapons for 15 years.

For plutonium, the other possible fuel for a nuclear bomb, the agreement bans plutonium reactors for 15 years and stipulates that Iran must dismantle its current one.

The White House pointed to an Associated Press article about a confidential side agreement that, according to the article, allows Iran to "install centrifuges up to five times as efficient as the 5,060 machines it is now restricted to using." That would kick in at Year 11, or 2026. The article warned that this could reduce the time needed to produce weapons-grade uranium after the deal expired.

The White House also noted a Brookings Institution summary that said that after 2025, Iran could "test large numbers of, and conduct enrichment R&D with, advanced centrifuges," and get a space ready for running the most advanced centrifuge after 2030.

So starting seven years from now, Iran could begin developing and then using better centrifuges.

However, both of those sources noted that for 15 years, Iran could not have more than 300 kg (660 pounds) of low-enriched uranium, well below the amount experts agree is needed to make a single bomb.

Why does the cap matter?

Because even as Iran installed more efficient centrifuges, it could not end up with more enriched uranium than is permitted. The agreement spells out various ways to make that happen, either by diluting the uranium or sending it out of the country under international controls.

The Arms Control Association, a group that supports the Iran deal, produced this timeline. The gray bars at the top show the changes in the centrifuge rules at the 10-year mark, and the limits on enriched uranium through the 15-year mark. 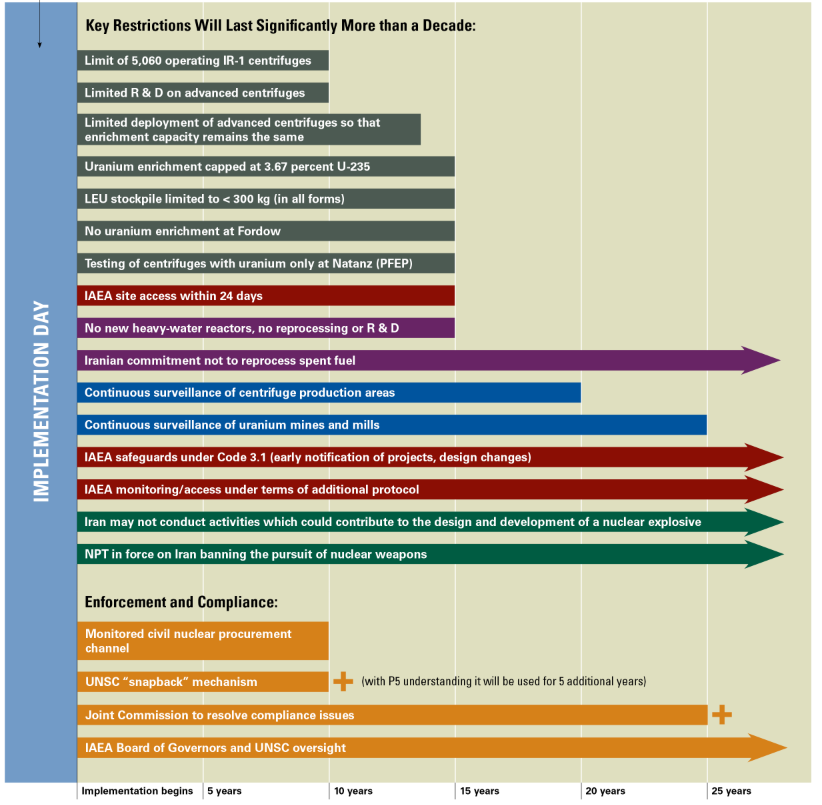 Trump said that in seven years Iran would be free to build nuclear weapons. But under the agreement and the nuclear Nonproliferation Treaty, Iran agreed on paper at least that it would never build a nuclear weapon. Formally, it would not be free to do as it pleases.

"Some of the terms last forever," said nuclear arms expert Matthew Bunn at Harvard’s Kennedy School. "The deal prohibits Iran forever from the key activities of a nuclear weapon design and manufacture program — experimenting with the relevant types of explosives, doing the relevant neutron modeling, and so on."

The Additional Protocol improves international oversight of nuclear fuel, from when it is mined to when it becomes waste, and allows broader inspections, such as collecting environmental samples at any location to detect radioactive materials.

Plus, many activities have to be approved by a commission that oversees the agreement.

The deal does have one element that clearly ends at the 10-year mark. If Iran fully complies with the deal for a decade, the U.N. Security Council’s resolutions on Iran’s nuclear program come to an end. That is called Termination Day. The agreement itself continues in force, but the United Nations no longer has Iran’s nuclear program on its docket. The White House noted this clause.

Trump said that the Iran nuclear deal expires in seven years and after that, Iran is free to develop a nuclear weapon.

The agreement’s limits on enriched uranium last for another 12 years. While some restrictions ease after seven years, the key elements that prevent Iran from enriching the uranium needed for a bomb remain until 2030. In addition, certain terms last forever, including the prohibition on ever designing or making a nuclear weapon, and remaining under the eye of international inspectors.

PolitiFact Rating:
False
"In seven years that (nuclear) deal will have expired, and Iran is free to go ahead and create nuclear weapons."
Donald Trump
President of the United States
https://plus.cq.com/doc/newsmakertranscripts-5309529?4

Brookings, A comprehensive timeline of the Iran nuclear deal, July 21, 2015