Shannon Watts
stated on May 21, 2018 in a tweet:
"Trained police hit their targets less than 30 percent of the time."

Calls to arm school teachers grew louder after a gunman at a Santa Fe, Texas, high school on May 18 killed eight students and two teachers, and injured 13 others.

"Trained police hit their targets less than 30 percent of the time, yet the @NRA wants to arm volunteer teachers," Shannon Watts, founder of Moms Demand Action, tweeted May 21. "It's on each of us to prevent this NRA dystopia, and stop letting the gun lobby write our gun laws. We're sacrificing our children at the altar of gun manufacturers' profits."

Trained police hit their targets less than 30% of the time, yet the @NRA wants to arm volunteer teachers. It's on each of us to prevent this NRA dystopia, and stop letting the gun lobby write our gun laws. We're sacrificing our children at the altar of gun manufacturers' profits. https://t.co/mWCBVrrLNH

Watts may have a point that the average armed teacher might be less accurate than a trained cop. But her claim that trained police hit their target "less than 30 percent of the time" is not as clear-cut as Watts suggests.

For starters, national numbers on police marksmanship are not readily available. But we found data on some individual jurisdictions, including several major metropolitan police departments.

An aide to Watts pointed us to a 2008 Rand study that looked at the accuracy of New York Police Department officer-involved shootings. The key data point is the "hit rate," the number of rounds that struck a suspect divided by total shots fired.

The Rand study looked at NYPD firearm-discharge reports from from 1998 through 2006. Some of the findings point in Watts’ favor, while other data refutes her point.

Hit ratios were below 30 percent for gunfights (18 percent) and from long ranges (23 percent from more than seven yards away). However, in cases where suspects did not return fire, NYPD officers hit their targets 30 percent of the time. Accuracy levels were above 30 percent when the target was seven yards away or closer (37 percent).

Recent data shows a further uptick in the NYPD’s hit rate compared with the Rand study.

Inspector Kevin Maloney, who headed up the NYPD unit that oversees police-involved shootings, told the New York Daily News in December 2017 that the NYPD fired a record low number of rounds that year. The department’s hit ratio also exceeded those in the 2008 Rand study in 2017.

Recent data from the Los Angeles Police Department further undermines Watts’ claim. According to the LAPD’s 2016 report, the average annual hit ratio from 2012 through 2016 was 33.4 percent, with a substantial uptick in 2016.

"With a lot of training and reform, LAPD has a hit rate of 48 percent (in 2016). That is likely at the high end of hit rates," said Gregory Ridgeway, an associate professor of criminology and statistics at the University of Pennsylvania. "Their number of rounds per incident is also way down in the last five years."

In a 2006 study, Michael D. White, a criminology professor at Arizona State University, provided a roundup of hit ratio data from various jurisdictions and timeframes. (This data is quite old but we provide to give a broader cross-section of jurisdictions.)

"Hit rates vary notably across police agencies but rarely exceed 50 percent," White wrote. "The research examining shooter accuracy overwhelmingly debunks the Hollywood myth of police officers as sharp shooters who can wing suspects in the shoulder or leg or shoot weapons out of suspects’ hands."

"Simply putting a gun on the premises and hoping someone’s going to do the right thing with it is baseless," Chris Grollnek, a former law enforcement officer who specializes in security issues told the PBS Newshour. "All you’re doing is signing people up for PTSD."

Administration officials in March said the White House wants to partner with local official to give teachers and other volunteer school personnel "rigorous firearms training," but offered few details on a concept that has been embraced by the National Rifle Association.

Neither the White House nor NRA responded to requests for a comment.

Watts said, "Trained police hit their targets less than 30 percent of the time."

By saying less than 30 percent, Watts is distorting the facts. A national figure for police marksmanship is not readily available.

Overall, data from some jurisdictions supports Watts’ claim, while other data refutes it. This claim is partially accurate. We rate it Half True. 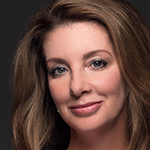 Tweet by Shannon Watts, founder of Moms Demand Action, May 21, 2018

Email interview with Greg Ridgeway, associate professor of criminology and statistics at the University of Pennsylvania, May 22, 2018