Top Stories USA
stated on September 29, 2018 in a Facebook post:
"Christine Blasey Ford claims that she called a friend on her cell phone after the ‘attack’ in or around 1982."

Social media platforms have been overwhelmed by posts about Christine Blasey Ford’s testimony alleging a sexual assault by then 17-year-old Brett Kavanaugh, who is now a nominee for the Supreme Court.

Here’s one that is eye-catching -- but wrong.

A reader found it on the Facebook page for Top Stories USA, a hyper-partisan website with such recent headlines as, "Loud-mouthed Woman Who Confronted Flake In Elevator Was A Soros Funded Hit Job!" "Hillary Thinks She’s A Star – TANKS ‘Murphy Brown’ Ratings Just By Showing Her Face," and "Watch Lindsey Graham’s EPIC Democrat Butt-Kicking at Kavanaugh’s Hearing."

The Facebook post, dated Sept. 29, featured an image that said, "Christine Blasey Ford claims that she called a friend on her cell phone after the ‘attack’ in or around 1982. The first cell phone was sold for $3,995 in March of 1984." (The claim is accompanied by the image of an ancient-looking Motorola cell phone.) 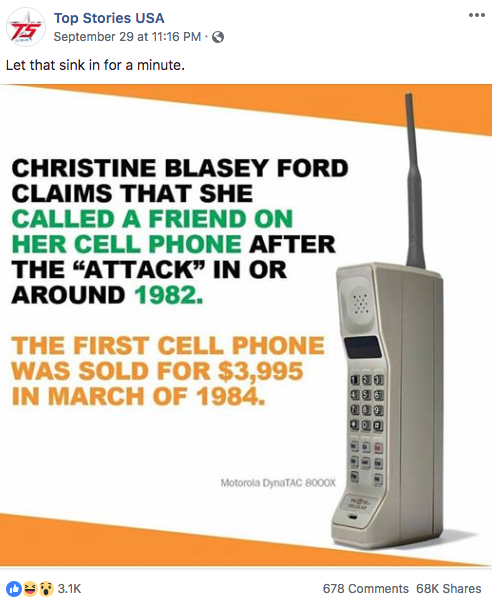 However, we found no evidence that Ford ever made that claim. (We did not hear back from Top Stories USA. A spokeswoman for Ford referred us to a fact-check by Snopes.com)

The claim of a cell phone call does not appear in the Washington Post’s original story on Sept. 16, 2018, in which Ford went public with her claim. "Ford said she told no one of the incident in any detail until 2012, when she was in couples therapy with her husband," the article noted.

Ford elaborated on her recollections during in her testimony before the Senate Judiciary Committee on Sept. 27, 2018. After the alleged attack by Kavanaugh and his friend Mark Judge, she testified:

"I left the bathroom, ran down the stairs, through the living room, and left the house. I remember being on the street and feeling an enormous sense of relief that I had escaped from the house and that Brett and Mark were not coming after me.

"Brett’s assault on me drastically altered my life. For a very long time, I was too afraid and ashamed to tell anyone the details. I did not want to tell my parents that I, at age 15, was in a house without any parents present, drinking beer with boys. … Over the years, I told very few friends that I had this traumatic experience."

Neither of these accounts mentions a cell phone call.

On questioning from Rachel Mitchell, a prosecutor retained by the Republican Judiciary Committee majority to question Ford and Kavanaugh, Ford said she did not recall how she got home.

Mitchell: "You've described this as being near the country club, wherever this house was, is that right?"

Mitchell: "Would it be fair to say that somebody drove you somewhere, either to the party or home from the party?"

Michell: "OK. Has anyone come forward to say to you, 'Hey, remember, I was the one that drove you home?'"

In her official post-testimony report, Mitchell noted some concern about this aspect of Ford’s recollection.

"Given that this all took place before cell phones, arranging a ride home would not have been easy," Mitchell wrote. "Indeed, she stated that she ran out of the house after coming downstairs and did not state that she made a phone call from the house before she did, or that she called anyone else thereafter."

But while Mitchell mentions cell phones in this context, Ford did not. (And Mitchell’s report is dated Sept. 30, so it could not have been a source for the meme posted on Sept. 29.)

For the record, the meme does appear to be correct about the price of a Motorola DynaTAC 8000X in 1984. The meme "plagiarized the introductory paragraph of an article about the first handheld cell phone published by Mashable back in 2014," Snopes reported.

A Top Stories USA post on Facebook said, "Christine Blasey Ford claims that she called a friend on her cell phone after the ‘attack’ in or around 1982. The first cell phone was sold for $3,995 in March of 1984."

Ford never said anything about using a cell phone after the alleged attack. We rate the statement Pants on Fire.

BuzzFeed, "Here Are The Letters Brett Kavanaugh And Christine Blasey Ford Sent To The Senate," Sept. 24, 2018