Mourners embrace at a vigil honoring Horizon High School sophomore Javier Amir Rodriguez, who lost his life in a mass shooting in nearby El Paso, on August 5, 2019 in Horizon City, Texas. (Photo by Mario Tama/Getty Images)

In the wee hours of Aug. 4, a gunman opened fire on the street in a Dayton, Ohio, entertainment district, killing nine and injuring 27.

Later that day, Wisconsin state Rep. Ron Tusler was on Facebook claiming mass shootings are down under President Donald Trump.

"Less mass shootings under Trump! His base doesn't hate anyone," declared Tusler, R-Harrison, in a since-deleted post.

That’s quite the disparity. 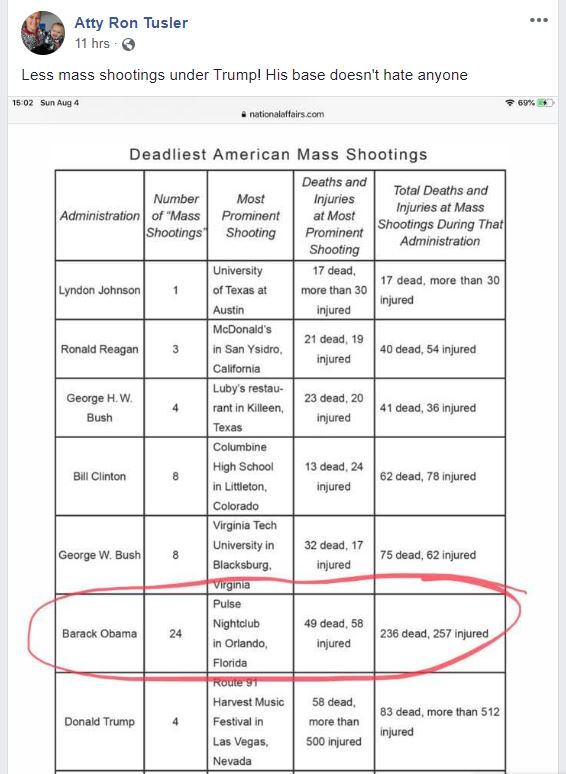 There’s a lot to cover — and a lot wrong — in this seemingly simple claim. Let’s break it down.

Claim based on flawed, outdated data

For one, the data it references is badly outdated. The chart in Tusler’s post is pulled from a Spring 2018 article in National Affairs, a quarterly journal from the American Enterprise Institute, a conservative think tank.

The chart says it pulled the tallies for each president from an LA Times timeline published in October 2017, then added the February 2018 Marjory Stoneman school shooting in Parkland, Fla.

So the data at best ends a year and a half ago, reflecting less than half of Trump’s time in office to date.

The chart itself is flawed as well. Converting the LA Times narratives to a chart implies a degree of consistency and comprehensiveness that the newspaper did not intend. The article didn’t define any criteria for inclusion aside from a sentence at the top saying, "Here are some of the most notable mass shootings in the U.S. in recent decades."

The National Affairs chart is particularly haphazard since it added in the Florida shooting but ignored the Texas First Baptist Church massacre in November 2017 that killed more people.

The broader issue with both the chart and Tusler’s claim is the use of raw numbers to compare one partial term under Trump to two full terms under Obama.

Simple tallies will, of course, be larger over a longer time period.

So what are those tallies? And how does Tusler’s claim about less shootings hold up to a better comparison, such as mass shootings per year?

Mark Obenshain
stated on January 31, 2023 in a floor speech.
“You know how many children are dying across Virginia because of fentanyl poisoning? A heck of a lot more than are dying at the hands of guns.”

Those answers depend on how you define a mass shooting.

Though bandied about in politics, media and culture, there is no universally accepted definition of the term.

We turned to the Washington Post and Mother Jones, since both have been tracking this subject in detail and have data going back several presidential administrations.

We find a trend line that doesn’t match up with particular presidents or party control, it simply shows a steady increase in shootings over time.

Our analysis of The Washington Post data shows an average of 2.4 mass shootings per year under President Ronald Reagan, 2.3 under George H. W. Bush and 3.6 under both Bill Clinton and George W. Bush. The rate jumps to 5.1 per year under Obama and 7.9 per year so far under Trump — a roughly 50% increase.

In terms of raw numbers, that’s 41 shootings in the eight years Obama was in office, compared to 20 already in the two and a half under Trump.

The data from Mother Jones shows a similar trend, though the numbers are different since they have a broader definition of mass shootings and aren’t as comprehensive as the Post in prior years. Mother Jones reports 1 to 2 shootings per year from the Reagan era through George W. Bush, then 4.8 under Obama and 11.5 under Trump.

(The Gun Violence Archive doesn’t shed much light on this claim since it only goes back to 2014.)

We asked Tusler if he was aware the data was outdated, and whether he felt raw numbers were a fair way to compare Trump and Obama.

"If there is newer data, please provide it and I would update. I prefer the most up to date information," he said in a Facebook message. "I don't think raw numbers tell the whole story. But, at least they are not interpreted with a bias."

It’s an ironic response given that it’s the use of raw numbers that paints a skewed picture of the Trump and Obama eras. Doing an annual average equalizes the comparison.

Tusler said he thought the data was more recent and had removed the post from Facebook, though it remained until this fact check published.

In the wake of two mass shootings that left 31 dead in the span of 13 hours, Tusler claimed there have been fewer such shootings under Trump than Obama.

The chart Tusler based his claim on is both incomplete and outdated — including only half of Trump’s time in office. And it’s absurd to use a raw tally of shootings to compare just over two years under Trump to eight years under Obama.

Using more comprehensive data and a reasonable criterion like shootings per year, we see that mass shootings have risen steadily in recent decades regardless of who is in the White House.

So shootings are up — not down — under Trump.

The Washington Post, The terrible numbers that grow with each mass shooting, updated Aug. 5, 2019