Skewed maps orchestrated by Wisconsin Republicans after the 2010 Census drew numerous legal challenges but survived to give the GOP a stranglehold on the state Legislature.

With the 2020 Census looming, redistricting is again a hot topic, particularly for the Democrats who garnered more statewide votes but claimed just over one-third of the Assembly seats last fall.

Opponents of gerrymandering proposed in July 2019 to have the state’s nonpartisan Legislative Reference Bureau draw the maps without giving an advantage to either party. Republican leaders who control the state Legislature have said the bill is going nowhere.

But that proposal prompted a Twitter exchange that caught our eye.

Former state Rep. Adam Jarchow, R-Balsam Lake, retweeted coverage of the proposal July 16, 2019, calling it "non-sense" and insisting elected officials should draw maps. When another user asked if he felt gerrymandering is an issue, the two-term lawmaker responded:

"My answer is the same as it’s been for 250 years in this country. Elected officials draw maps. That’s it. If people don’t like how they drew them, kick them out of office."

Hmm. Are elected officials really the only people who draw district maps in the U.S.? Or are there other ways to do it?

Given the attention on this issue will only grow in the coming year, we decided to check it out.

Wisconsin is currently a classic example of gerrymandering, or manipulating legislative boundaries for partisan gain.

Amid one legal challenge to the maps, a federal court said the Wisconsin maps drawn in 2011 were among the most heavily skewed to one party of any plan in the country going back more than 40 years. We rated Mostly True a 2017 claim that Wisconsin was the most or second-most gerrymandered state in the country.

After the 2010 Census, Republicans — who controlled all of state government — drew lines that created an out-sized number of GOP districts in a state that is otherwise pretty evenly divided between Democrat and Republican voters. The November 2018 election laid the disproportionate boundaries bare.

Meanwhile, a Marquette University Law School poll earlier this year found 72% of Wisconsinites support having a nonpartisan commission draw the maps — including a majority of both parties.

Most states have legislators draw boundaries, but not all

Wisconsin’s approach redistricting is the most common nationally, but it is far from the only option.

As of December 2018, state legislatures were responsible for drawing state district maps in 30 states, often subject to a veto by the governor. (Wisconsin is among those granting the governor veto power, which means the state Legislature may need a more cooperative approach than the all-GOP process that yielded the current maps.) Four of those states have a backup commission, however, that draws the maps if the Legislature deadlocks or the governor issues a veto.

But that number is shrinking.

Redistricting reforms have put maps in the hands of a commission of some kind in Colorado, Michigan, Missouri, New York, Ohio and Utah since 2010, according to the Brennan Center for Justice, a nonpartisan law and policy institute at the New York University School of Law.

New Hampshire passed a bill to move to an independent commission, but it was vetoed Aug. 9, 2019, by the Republican governor.

All told, 20 states now use some type of commission or nonpartisan agency to draft of state legislative maps. The commissions are often nominated by leaders of both parties. Some states give them final say, others make the commission’s maps subject to approval by the Legislature or governor.

Eleven states currently give the Legislature no direct role in drawing or approving the state legislative boundaries, according to the Brennan Center. That number will grow to 13 in 2021 when new laws in Ohio and Michigan take effect. 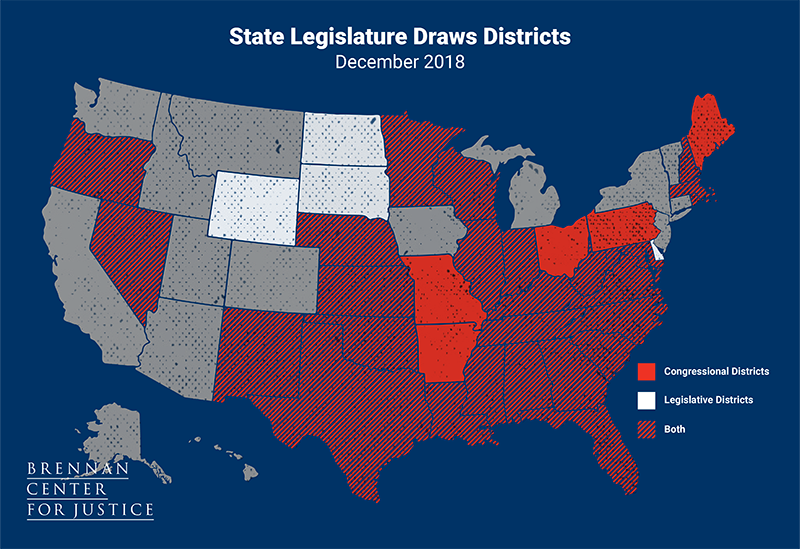 The breakdown is similar for how congressional districts are drawn, aside from the seven states that have only one district.

Jarchow did not reply to requests for evidence of his claim. An attorney in Polk County in northwestern Wisconsin, Jarchow left the state legislature in January 2019 after losing a special election for a state Senate seat and serving two terms in the Assembly.

‘Kick them out of office’

Jarchow concluded his claim with an oft-heard response to political criticism, that voters who don’t like it can elect for new lawmakers.

But that’s exceptionally difficult in a gerrymandered state.

"Even in wave election years you don’t see that much change," said Michael Li, senior redistricting counsel at Brennan. "The whole point of gerrymandering is to make sure seats don’t flip, and we have proof from around the country that this works if you draw districts right."

In 2018, only 28% of the congressional districts that flipped to another party nationwide were from states where maps were drawn by legislatures — even though the majority of states use that system.

Jarchow, a Republican, said amid a redistricting discussion that "elected officials draw maps. That’s it."

State legislatures still draw the majority of maps around the country. But a growing number of states have turned to an independent or bipartisan commission of some kind to establish legislative boundaries.

Eleven states currently give the Legislature no direct involvement in drawing or approving maps.

Brennan Center for Justice, Who Draws the Maps? Legislative and Congressional Redistricting, Jan. 30, 2019