Joe Biden
stated on February 15, 2019 in a tweet:
"Since the passage of (the Violence Against Women Act), annual rates of domestic violence have dropped by 63 percent."

Joe Biden championed the Violence Against Women Act as a Democratic senator from Delaware in 1994. Two and a half decades and two terms as vice president later, he’s still touting the law and its impact as he considers whether to run for president in 2020.

The law increased funding and provided additional legal tools for combating violent crimes committed against women. The law has been reauthorized in 2000, 2005, and 2013, and it expired in the recent government shutdown. It must now be reauthorized, which Biden urged lawmakers to do quickly.

"Since the passage of VAWA, annual rates of domestic violence have dropped by 63%," Biden tweeted Feb. 15. "The National Domestic Violence Hotline responds to more than 26,000 people a month, creating a safety net for survivors. We have made progress, but there is much more to do. Right now."

Since the passage of VAWA, annual rates of domestic violence have dropped by 63%. The National Domestic Violence Hotline responds to more than 26,000 people a month, creating a safety net for survivors. We have made progress, but there is much more to do. Right now.

We have previously looked at a similar assertion. In 2013, Rep. Gwen Moore, D-Wis., cited a drop of 67 percent since passage. We found official Justice Department data from 2010 showing that it had fallen 63 percent by then, so we rated the statement Mostly True.

But that was more than six years ago. What does the current data say? Biden appears to be in the ballpark, though when we discussed the data with domestic violence experts, they offered a few caveats.

As it happens, the data hasn’t advanced very much.

There hasn’t been any equivalent data published for the years beyond 2012. In 2012, the domestic violence rate was slightly higher than it was in 2010, so the drop between 1994 and 2012 was about 60 percent. This was the report that Biden’s office pointed as evidence to when we contacted them.

More recent data — related, but distinct — suggests that at least one subset of domestic violence, intimate partner homicide, may actually be experiencing a modest upswing.

According to a paper now being finalized by Northeastern University criminologists Emma E. Fridel and James Alan Fox, homicides by intimate partners have risen modestly since about 2014, both for men and women as victims. Here’s a chart from the forthcoming paper: 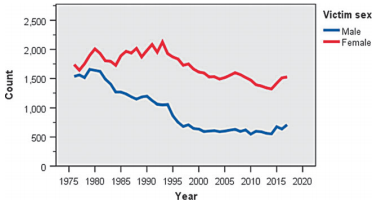 While the frequency of intimate partner homicide is well below where it was in the early 1990s, Fox said, "there has been a recent uptick, particularly with guns."

How much credit goes to the law?

The second caveat concerns cause and effect.

It would stand to reason that the law did help bring down the domestic violence rate. But it may not have been the only factor.

Biden’s statement "implies causation, when all we have is correlation," said Leigh Goodmark, a law professor at the University of Maryland Carey School of Law, where she launched the Gender Violence Clinic.

Here’s a chart from the Justice Department showing the trend lines for all violent crime and for all intimate partner violence between 1993 and 2010: 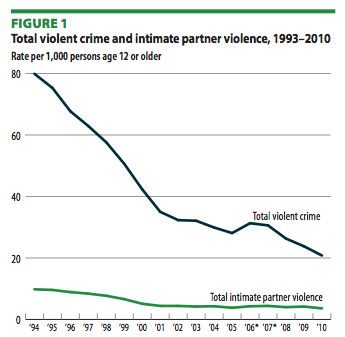 Goodmark added a related point: Most of the decline occurred prior to 2000. Between 2000 and 2010, by contrast, the domestic violence rate essentially stagnated.

Biden said, "Since the passage of (the Violence Against Women Act), annual rates of domestic violence have dropped by 63%."

He’s close on the percentage, which was 60 percent between 1994 and 2012. However, this data should be treated cautiously because it is six years old, and it’s unclear whether the decline is due to the law itself or to the broad, societal decline in all types of violent crime since the early 1990s. And after 2000, as violent crime continued to fall, the domestic violence rate remained about the same.

PolitiFact Rating:
Half True
"Since the passage of (the Violence Against Women Act), annual rates of domestic violence have dropped by 63 percent."
Joe Biden
Former vice president
https://twitter.com/JoeBiden/status/1096434419378933760

Email interview with Leigh Goodmark, law professor at the University of Maryland Carey School of Law and founder of the Gender Violence Clinic, Feb. 21, 2019