As Democrats consider who to nominate as their presidential candidate, the National Rifle Association is sounding the alarm about former Vice President Joe Biden.

"Biden calls for gun ban," reads the text over a photo of Biden.

"If elected, Joe Biden promises he will BAN your guns," additional text says. 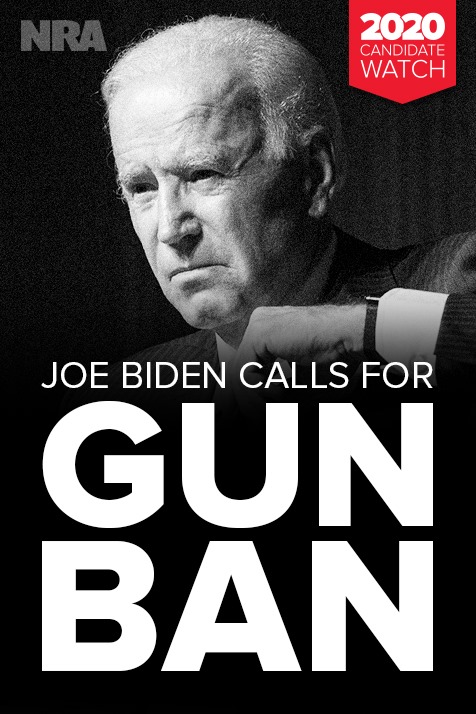 The gun-rights organization commented on its post, telling users to "read more" and sharing a link to a Fox News story.

The story is about an education plan Biden released on May 28. The story notes that the plan says: "As president, he will secure passage of gun legislation to make our students safer, and he knows he can do it because he’s defeated the National Rifle Association twice before. He’ll begin by again championing to ban assault weapons and high-capacity magazines — bans he authored in 1994. In the months ahead, he will release additional proposals to address the gun violence epidemic in our country."

The 1994 law focused on 18 specific firearms and banned certain models of AR-15s and AK-47s. It was illegal to make such weapons for use by private citizens during the 10 years the ban was in effect. But, as this Washington Post primer on the ban notes, it was legal to own or resell any assault weapon manufactured before the law went into effect, meaning if you owned a banned gun before the ban, you could keep it or sell it.

When we asked the NRA about the post, Amy Hunter, a spokesperson for the organization’s Institute for Legislative Action, said: "When we say Joe Biden promises to ban guns, we mean exactly what we say: He plans to ban guns. We did not say ‘all guns,’ and we didn’t characterize it as a ‘total gun ban.’"

If he wants to ban "so-called assault weapons," she said, he is calling for a gun ban on "millions and millions of guns," including the popular AR-15.

But saying Biden calls for a gun ban could lead readers to believe he’s seeking to outlaw all firearms. Consider that in the United Kingdom, for example, four dog breeds are banned — it’s against the law to own pit bull terriers among other dogs. But to say that England has banned dogs is misleading; someone could understandably believe no dogs are allowed there.

Andrew Bates, a spokesman for Biden’s campaign, said the education plan is the only policy plan the campaign has released about guns.

Biden talked about a "smart gun" policy when he was asked about gun violence during the Democratic debate June 27.

"We should have smart guns," he said. "No gun should be able to be sold unless your biometric measure could pull that trigger. It’s within our right to do that. We can do that. Our enemy is the gun manufacturers, not the NRA. The gun manufacturers."

Biden has been advocating for regulations that would require manufacturers to include a biometric system that would prohibit people from firing weapons unless their fingerprints are registered to that specific weapon, The Verge reported on June 27.

On June 29, Axios published a story summing up where the 2020 Democrats stand on gun control. Biden, it says, believes only "smart guns" — ones that require a "biometric measure" to pull the trigger — should be sold. He has also supported the government buying back guns from owners.

Hunter, of the NRA, said Biden has a long history of votes and statements that make his views clear.

The NRA said Biden called for a "gun ban."

Biden has advocated banning assault weapons, and he has a history of trying to ban certain guns. But as he vies for the Democratic presidential nomination, he isn’t promising to prohibit Americans from owning any gun. He said he’d again champion a ban on assault weapons and high-capacity magazines like the bans he supported in 1994. Those bans prevented the manufacture and sale of certain weapons for private citizens to use; they did not confiscate or prevent the sale of weapons that were purchased before the restrictions went into effect.

The Washington Post, "Everything you need to know about the assault weapons ban in one post," Dec. 17, 2012

Viral image
stated on May 15, 2022 a Facebook post:
Photo from “data leak at Elon Musk AND NASA … are said to be from one of Elon Musk’s Space-X satellites.”

Viral image
stated on May 16, 2022 a Facebook post:
CBS News reported that two more suspects were arrested in the Buffalo shooting, and that one more victim was identified.

Viral image
stated on May 15, 2022 a Facebook post:
“Your government quietly confirmed the fully vaccinated are developing Acquired Immunodeficiency Syndrome.”

Facebook posts
stated on November 8, 2021 a Facebook post:
The “Franklin scandal” broke in 1989 “when hundreds of children were apparently flown around the US to be abused by high ranking ‘Establishment’ members."