Donald Trump
stated on June 18, 2019 in remarks to reporters on the White House South Lawn.:
Says the Central Park Five "admitted their guilt."

As President Donald Trump was boarding Marine One, a reporter called out a question about a vicious attack in New York’s Central Park that took place 30 years ago.

"Mr. President, will you apologize to the Central Park Five?" reporter April Ryan called out June 18 on the White House lawn. "They've been exonerated. There have been videos and movies shown about the case, and you came out with a full-page ad saying that they should die, that they should have the death penalty. Do you apologize?"

"Why would you bring that question up now?" Trump said. "It's an interesting time to bring it up."

"There's movies and everything about them," said Ryan, Washington bureau chief of American Urban Radio Networks. (The current Netflix series "When They See Us" is a dramatization of the case.)

"You have people on both sides of that," Trump replied. "They admitted their guilt. If you look at Linda Fairstein, and if you look at some of (the) prosecutors, they think that the city should never have settled that case. So we'll leave it at that."

Trump’s statement that the young teenage boys known as the Central Park Five "admitted their guilt"distorted the record and ignored key facts — much more is known now than in the weeks after the attack. Evidence suggests that the young men made false confessions that they later recanted.

A brutal attack in Central Park

In the early hours of April 20, 1989, a 29-year-old woman jogger was found badly beaten and raped in Central Park. On the night of the crime, police had responded to a group of about 30 teens threatening people in the park. A racing bike rider was accosted. A taxi driver reported rocks thrown at his cab. Two men, in separate incidents, were assaulted and injured and one of them was robbed. Ultimately, five young men, ages 14 to 16, were questioned by police and later charged with the beating and rape of the woman.

In their first hours with police, the young men offered a mix of confessions. The details from each did not align with the accounts from the others. They identified different individuals who actually committed the rape. They did not agree on where the attack took place. Their statements failed to match the physical evidence from the scene, including the woman’s clothing. Importantly, none of them confessed to the rape itself.

They soon retracted their confessions.

The incident was front page news and fraught with racial overtones. The victim was white. The suspects were black and Hispanic. News coverage referred to "wilding teens" marauding at will.

Within a few days, authorities had charged the five teens with rape and attempted murder.

Soon after that, on May 1, Trump paid $85,000 for full-page ads in New York’s four major newspapers, the New York Times, the Daily News, the New York Post and New York Newsday.

''Bring Back the Death Penalty. Bring Back Our Police!" the ad’s headline said (see page 13).

"I want to hate these muggers and murderers," Trump wrote. "They should be forced to suffer and, when they kill, they should be executed for their crimes."

The victim survived the attack. Trump’s statement saw the crime as part of a broader social decline.

"At what point did we cross the line from the fine and noble pursuit of genuine civil liberties to the reckless and dangerously permissive atmosphere which allows criminals of every age to beat and rape a helpless woman and laugh at her family’s anguish? And why do they laugh? The laugh because they know that soon, very soon, they will be returned to the street to rape and maim and kill once again." 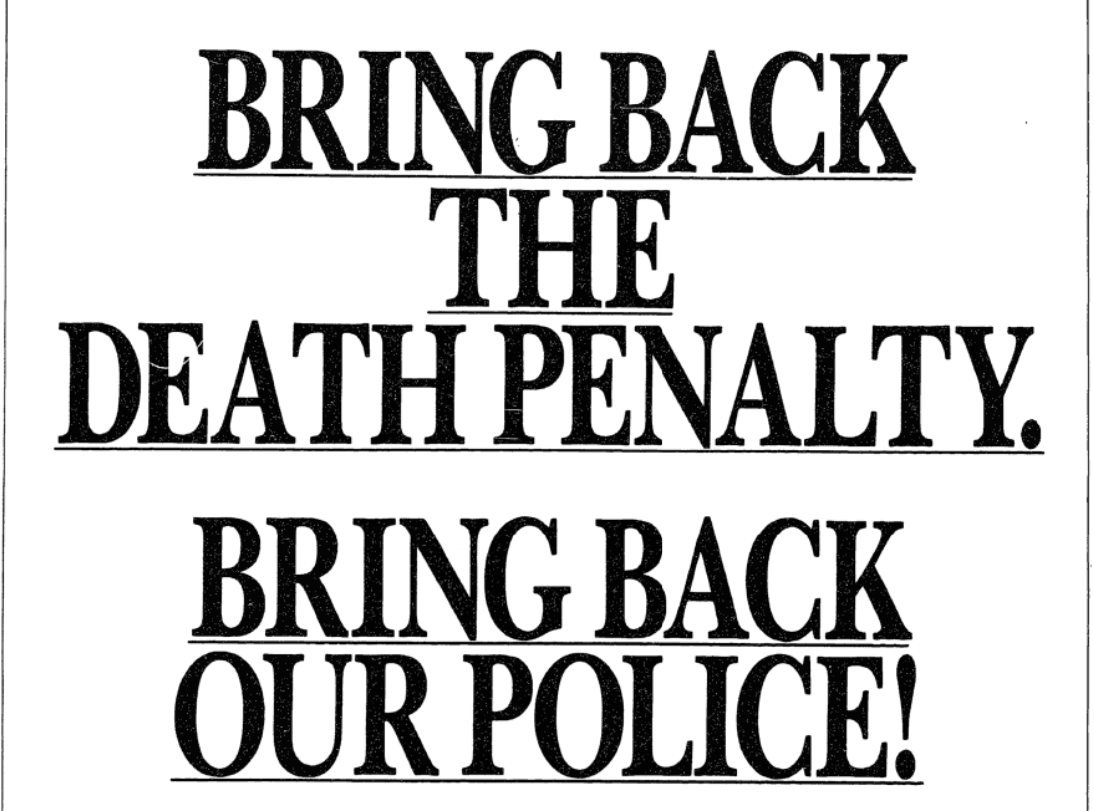 Headline from Donald Trump’s ad in New York newspapers, May 1, 1989

After a trial in which they maintained their innocence, the five teens were convicted of rape and assault. No physical or forensic evidence connected them to the attack on the jogger. The prosecution’s case "rested almost entirely on the statements made by the defendants," as the Manhattan District Attorney’s Office said in a later filing.

In addition to the attack on the woman, they were found guilty of two other assaults in the park. Four of them spent seven years in prison.

In February 2002, another man, Matias Reyes, in prison for raping and murdering a woman in 1989, confessed to raping and beating the Central Park jogger. He said he acted alone. DNA evidence conclusively tied him to the attack. He provided specific details that matched the crime scene. And he confessed to other sexual assaults that police had never linked to him.

With that new evidence, late in 2002, a judge dismissed the convictions.

"This court finds that although the defendants made incriminating statements linking them to the crime scene, as established in the parties' papers, none of the defendants admitted raping the jogger," the judge wrote.

Trump referred to a key prosecutor in the 1989 trial, Linda Fairstein, head of the city’s sex crimes unit. He said she and other prosecutors thought the city should not have settled. Her statements show she agrees with the judge’s ruling to vacate rape charges, but not the others.

"Mr. Reyes’s confession, DNA match and claim that he acted alone required that the rape charges against the five be vacated. I agreed with that decision, and still do," Fairstein said in a June 10, 2019, Wall Street Journal op-ed."

Fairstein, however, added that she thought the convictions on the other charges should stand. And in 2014, she objected to the city’s settlement, saying it ignored those other crimes. She said she believed that the teens played some role in the rape.

So Trump’s claim that Fairstein and other prosecutors "think that the city should never have settled that case" is also exaggerated.

The Central Park Five case raises the question of why these teenage boys would implicate themselves in a crime that they later denied having committed. It’s a complicated issue.

No court found that the interrogators used illegal methods to secure statements from the teenagers. Ohio State law professor emeritus Sharon Davies studied the record. In a 2006 article about lessons from the Central Park jogger case, Davies said detectives drew the questionable confessions from the young men using persuasion.

"Why not just be cooperative, demonstrate remorse, and put the whole bloody mess behind them, the detectives prodded," Davies wrote.

Whatever questions swirl around the circumstances, our focus here is more narrow: Did the teens admit their guilt, as Trump said?

In the words of the New York Supreme Court judge and the Manhattan District Attorney’s Office, "none of them admitted actually raping the Central Park jogger." In their trial and on appeal, they all maintained their innocence.

On the other hand, the young men described ways in which they participated in the attack, at least initially.

In the eyes of Steven Drizin, law professor and head of Northwestern University Center on Wrongful Convictions, Trump’s statement is "not entirely inaccurate but it is misleading and incomplete."

Not every legal scholar agrees that that those confessions were false. Paul Cassell, professor of criminal law at the University of Utah, pointed to a 2003 report commissioned by the New York City Police Department. Three outsiders selected for the panel decided that the teens first attacked the woman, and then the actual rapist took advantage of the moment.

The report’s authors had no additional facts beyond what was known at the trial. They acknowledged that the evidence offered "a reasonable basis for maintaining that Reyes did, indeed, commit an attack on the jogger by himself."

In the eyes of the District Attorney’s Office, the confessions "had serious weaknesses." It was plausible that each defendant "spoke about the crime with a view toward becoming a witness rather than a defendant."

In short, there is now ample evidence that the confessions were false, and in that sense, not actual admissions of guilt.

The District Attorney’s Office filing said, and the court agreed, that if a jury had been given the full set of evidence, it likely would have reached a different verdict.

In 2014, New York City agreed to pay the Central Park Five $41 million in a legal settlement.

The White House press office declined to comment for this fact-check.

Trump said that the Central Park Five "admitted their guilt." And he said some of the prosecutors involved "think that the city should never have settled that case."

While the five teens did early on admit to participating in an attack, they quickly withdrew those confessions. At best, they admitted their guilt to a limited degree for a brief time. Legal records show that none of them confessed to raping the woman in Central Park. A judge vacated their convictions when the actual rapist confessed and DNA evidence showed his guilt.

Trump ignores reams of evidence that now point to the false nature of those confessions. Even the prosecutor he cited said she agreed the rape convictions were rightly overturned.

First Vintage Books, "The Central Park Five: The Untold Story behind One of New York City's Most Infamous Crimes", 2012

NYU Review of Law and Social Change, The reality of false confessions: Lessons of the Central Park jogger case, 2006

Journal of Criminal Law and Criminology, Protecting the Innocent from False Confessions and Lost Confessions--And from Miranda, Winter 1998

Grist, How our fear of "wilding" colored the Central Park Five case, July 8, 2014