DeAnna Lorraine
stated on April 12, 2020 in a tweet that was retweeted by President Donald Trump:
Says of COVID-19 that Dr. Anthony Fauci "was telling people on February 29th that there was nothing to worry about and it posed no threat to the US public at large."

• On that date, Fauci said rules Americans would come to know as social distancing were not yet warranted.

• However, just about every other sentence of his remarks was filled with caveats indicating that the situation could change. He did not suggest that there was “nothing to worry about” or that the virus “posed no threat to the public.”

President Donald Trump raised eyebrows April 12 when he retweeted a supporter who had used the hashtag #FireFauci, a reference to Dr. Anthony Fauci, one of the nation’s top public health officials who has regularly joined the president on the podium in the White House press room.

The tweet that Trump shared was posted by DeAnna Lorraine, a pro-Trump Republican candidate who garnered 1.8% of the vote in an all-primary challenge to House Speaker Nancy Pelosi, D-Calif. In the primary, Lorraine finished behind Pelosi, two other Democrats and one other Republican.

The tweet came hours after Fauci told CNN’s Jake Tapper that lives could have been saved if the country had "shut everything down" from the beginning.

On April 12, Lorraine tweeted, "Fauci is now saying that had Trump listened to the medical experts earlier he could've saved more lives. Fauci was telling people on February 29th that there was nothing to worry about and it posed no threat to the US public at large. Time to #FireFauci…"

Sorry Fake News, it’s all on tape. I banned China long before people spoke up. Thank you @OANN https://t.co/d40JQkUZg5

When we looked closer at Fauci’s public statements on Feb. 29, we found that Lorraine’s tweet is significantly exaggerated. (Lorraine did not respond to an inquiry.)

What was known about the virus’ spread on Feb. 29?

Feb. 29 was a key moment in the course of the virus’ spread, because it was right around the time that public health officials began to suspect that the novel coronavirus had started to infect Americans through "community spread." Community spread means that the virus would be spreading from person to person within a particular community, rather than through cases linked to someone who had brought the virus from a known hot spot elsewhere.

On Feb. 28, Nancy Messonnier, director of the CDC’s National Center for Immunization and Respiratory Diseases, said it was possible that a reported case in California "could be the first instance of community spread — meaning the illness was acquired through an unknown exposure in the community." But it could also be that the patient was exposed through contact to a traveler who was infected, Messonnier said. The immediate risk to the general American public remained low, she said.

The following day, a health official from Washington state, where there were four presumptive cases of COVID-19, joined a CDC press briefing and said the state was "starting to see some spread in the community" and the public risk was increasing. "Should we start to see more spread in Washington, we might consider recommending measures like cancelling large public events," said Kathy Lofy, a Washington state health official. 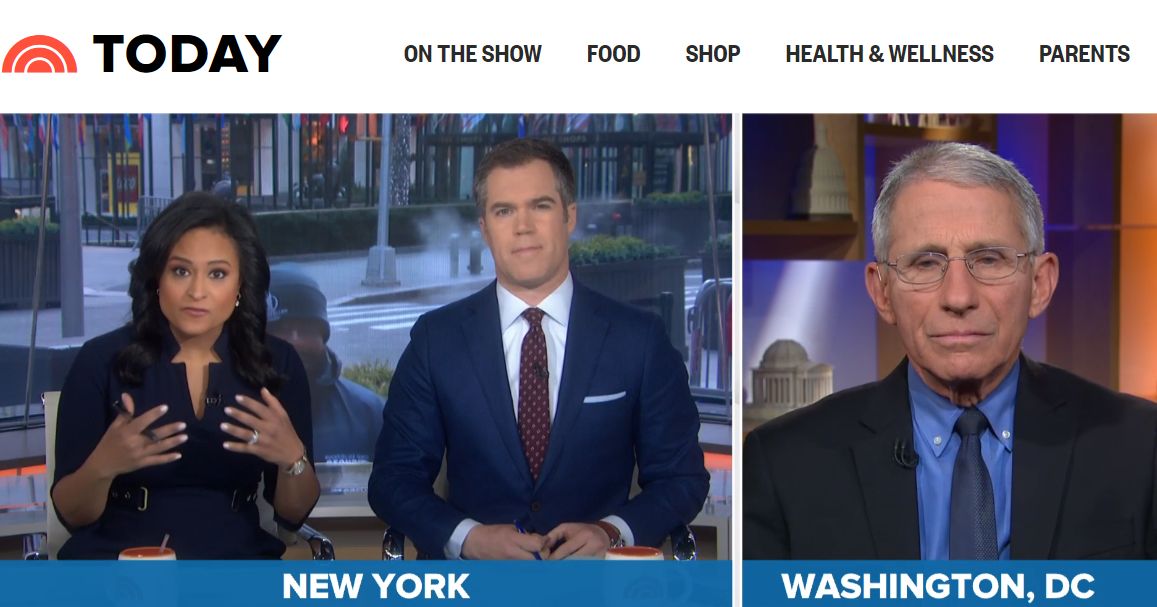 Fauci is interviewed on NBC's "Today Show" on Feb. 29

We found two televised appearances by Fauci on Feb. 29. One was an interview in the morning with Kristen Welker and Peter Alexander on NBC’s Today Show. The other was a press briefing with Trump and other officials that afternoon.

On the Today Show, Fauci did say that the lack of widespread, confirmed community spread meant that it was not yet time for radical responses like shutting down large gatherings and businesses. But he did not go as far as the tweet described. He didn’t say that "there was nothing to worry about" or that coronavirus "posed no threat to the U.S. public at large."

Instagram posts
stated on November 11, 2022 in a post
Increases in respiratory syncytial virus in children are linked to the COVID-19 vaccine.

Instead, his message was that the nation needed to remain vigilant for a possible worst-case scenario. Here are the relevant portions of that interview:

Alexander: "So, Dr. Fauci, it’s Saturday morning in America. People are waking up right now with real concerns about this. They want to go to malls and movies, maybe the gym as well. Should we be changing our habits and, if so, how?"

Fauci: "No. Right now, at this moment, there’s no need to change anything that you’re doing on a day by day basis. Right now the risk is still low, but this could change. I’ve said that many times even on this program. You’ve got to watch out because although the risk is low now, you don’t need to change anything you’re doing. When you start to see community spread, this could change and force you to become much more attentive to doing things that would protect you from spread."

Welker: "Dr. Fauci, quickly, how does this all end?"

Fauci: "You know, it ends if you -- it depends on the nature of the outbreak. I mean, this could be a major outbreak. I hope not. Or it could be something that’s reasonably well controlled. At the end of the day, this will ultimately go down. Hopefully we could protect the American public from any serious degree of morbidity or mortality. That’s the reason why we’ve got to do the things that we have in our plan."

With the benefit of a month of hindsight, this may seem like a less-than-ringing endorsement of the types of social distancing policies that would soon become required far and wide.

Even so, the tweet exaggerates its case. Fauci repeatedly emphasized the difference between the situation on Feb. 29 and what could happen in the future. In just this two-paragraph exchange, Fauci used the phrases, "right now, at this moment," "this could change," "you’ve got to watch out," and "this could be a major outbreak."

Fauci offered a similar message in the afternoon press conference.

He said, "The country as a whole, because we get asked that all the time, still remains at low risk. But when we say that, we want to underscore that this is an evolving situation, and in real time we will keep you apprised of what is going on, just the same way as we are doing it today."

Later in the briefing, Fauci said, "We need to prepare for further challenges, and we will have them. You will hear about the additional cases that will be coming on. You should not be surprised by that, but to realize that that is something that is anticipated when you get community spread."

Lorraine tweeted that Fauci "was telling people on February 29th that there was nothing to worry about and it posed no threat to the US public at large."

This is misleading. Fauci did say on Feb. 29 that rules Americans would come to know as social distancing were not yet warranted. However, just about every other sentence of his remarks was filled with caveats indicating that the situation could change. He did not indicate that there was "nothing to worry about" or that the virus "posed no threat to the public."

PolitiFact, "Louisiana governor is right, there was no suggestion Mardi Gras had to be canceled," April 8, 2020