On Aug. 9, the Facebook page Crusader Operator posted a bar graph that purports to show the yearly number of human trafficking arrests from 2010 to 2018. 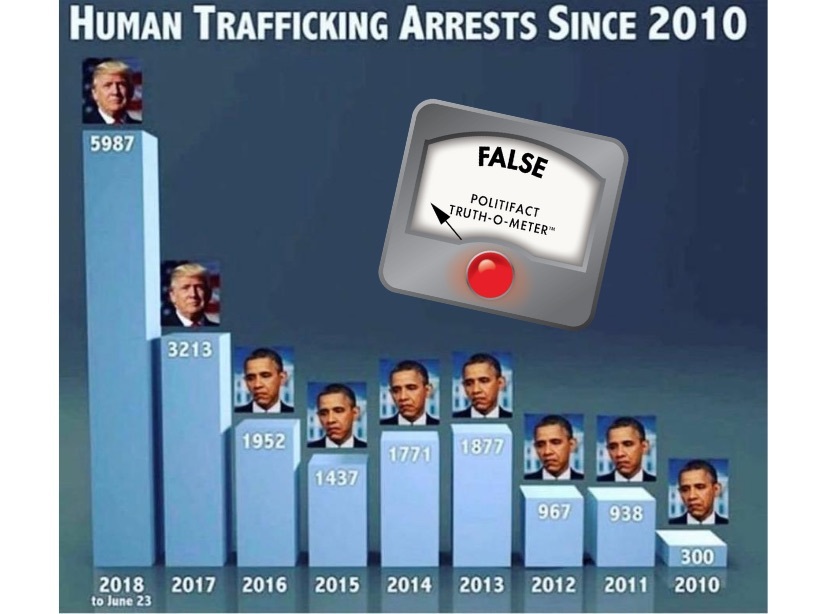 According to the graph, the number of human trafficking arrests per year ranged from 300 to 1,952 during the Obama presidency, and then skyrocketed after Trump became president, to 3,213 in 2017 and then to 5,987 in 2018. The graph is decorated with images of a frowning Obama over the bars representing 2010-16, and a smiling Trump for 2017 and 2018. The implication is that the apparent rise in arrests during the Trump years is due to the president’s leadership.

As posted to Facebook, the graph doesn’t specify any sources. Nor does it clarify whether it purports to represent federal arrests, state arrests, or both. However, an uncropped version of the graph, posted to Reddit in June 2018, cites two links showing where the numbers originated. (The Reddit page has since been banned.)

That graph says the data for the years 2010-16 are taken from a Washington Examiner article, which accurately cites official arrest figures from U.S. Immigration and Customs Enforcement. However, the data for 2017 and 2018 come from a public dashboard that cites bogus numbers gathered by followers of the baseless QAnon conspiracy theory.

Researcher Travis View, who hosts a podcast analyzing the QAnon movement and other conspiracy theories, debunked the QAnon numbers when they first appeared in 2018 on various far-right Internet outlets. Over the course of his investigation, View found that the data comes from now-banned subreddits, 8Chan threads, and Google spreadsheets, where QAnon followers compiled news articles and press releases about human trafficking and tallied arrests. "Their entire methodology for counting human trafficking arrests was fatally flawed," View told PolitiFact in an interview. "They didn’t discriminate between ICE and other law enforcement agencies. They didn’t make distinctions between charges and arrests. They didn’t count arrests that weren’t reported in the news."

QAnon followers promote or believe an unsubstantiated narrative that Trump and the military are working together to take down a powerful sex trafficking ring, which counts the Obamas and the Clintons among its members. Followers of the conspiracy theory, therefore, have a vested interest in proving that human trafficking arrests have increased under Trump.

According to official numbers, this isn’t the case. An ICE spokesperson shared with us the official arrest figures for the years 2017 and 2018, and they show that yearly human trafficking arrests have actually decreased since the final years of the Obama presidency. In 2017, ICE made 1,602 human trafficking arrests. In 2018, it made 1,588 arrests. This chart shows the official annual arrest figures over the 2010-18 span:

The figures that ICE gave us are consistent with numbers that the Trump White House has previously cited in press releases.

A graph shared on Facebook appears to show that the number of human trafficking arrests increased dramatically under President Donald Trump.

The numbers in the viral graphic combine arrest figures obtained through two wildly different methods of data gathering to make a misleading claim about human trafficking and further an unfounded conspiracy theory.

Facebook posts
stated on October 17, 2021 a Rumble video:
There is an “epidemic of plane crashes linked to vaccine-related strokes in pilots.”