Posts on social media are attempting to downplay the impact of the COVID-19 pandemic using a chart that shows that the 2020 U.S. death toll hasn’t changed much from previous years.

"People died before Covid. Amazingly the death rate hasn’t changed. How can that be with such a deadly virus????" one user wrote. 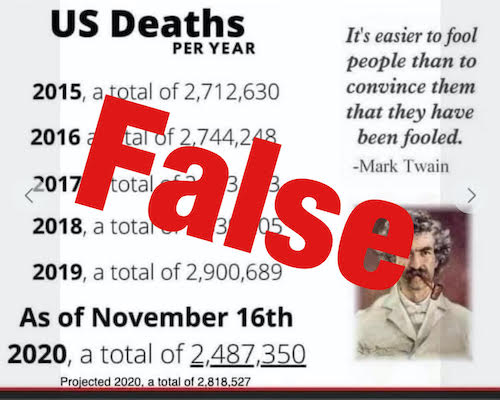 But the comparison is flawed for a few reasons. The 2020 statistics cited are not the final figures, and the Centers of Disease Control and Prevention has estimated that hundreds of thousands of excess American deaths are attributed to the virus this year. Lastly, it ignores that COVID-19 has killed over 290,000 Americans to-date, the highest virus death toll in the world.

Not only does the figure not account for the final six weeks of the year, it doesn’t represent the first few weeks, either. The weekly provisional deaths table doesn’t begin until the week ending Feb. 1, 2020. What’s more, these numbers are continuously updated due to reporting lags, which the CDC says can range from one week to eight weeks or more, depending on the jurisdiction and cause of death.

Meanwhile, in another report, the CDC estimated that COVID-19 has caused almost 200,000 excess deaths in the U.S. from late January through early October. Excess deaths are defined in the report as the number of persons who have died from all causes, in excess of the expected number of deaths for a given place and time.

Lauren Rossen, a data scientist with CDC’s National Center for Health Statistics, told PolitiFact that the numbers of deaths in 2020 are "without a question NOT on par with previous years" and that claims that the numbers are equivalent are based on misinterpretations and misuse of the available data.

"Looking at the number of deaths each year through week 44 (the most recent weeks are incomplete in 2020 due to the length of time it takes to receive and tabulate death certificates), we can see the totals over the same time periods each year. There have been nearly 317,000 more deaths in 2020 than in the same time period of 2019," Rossen said.

A chart circulating online claims to demonstrate that the annual U.S. death toll has not changed significantly in 2020 amid COVID-19.

This is wrong and ignores that the virus has killed more than 290,000 Americans to-date, the most in any country in the world.

The data used for 2019 is not final and the figures presented for 2020 are incomplete. Other CDC data also refutes the claim’s premise, with an estimation of hundreds of thousands of excess American deaths attributed to the virus this year.

Centers for Disease Control and Prevention, Daily Updates of Totals by Week and State, Accessed Dec. 11, 2020