Bloggers
stated on January 26, 2020 in an article:
Says China "stole Coronavirus from Canada and weaponized it into a Bioweapon."

Police stand guard outside Wuhan Huanan Wholesale Seafood Market, where a number of people related to the market fell ill with a virus in Wuhan, China, on Jan. 21, 2020. (AP)

A widely shared article on social media inaccurately claims Canada is the source of the 2019 coronavirus outbreak in China.

Zero Hedge, a blog with a track record of publishing false information, said in a Jan. 26 story that the coronavirus is part of a Chinese plot to develop a bioweapon. The article was republished from a website called Great Game India.

"Last year a mysterious shipment was caught smuggling Coronavirus from Canada. It was traced to Chinese agents working at a Canadian lab," the story reads. "Subsequent investigation by GreatGameIndia linked the agents to Chinese Biological Warfare Program from where the virus is suspected to have leaked causing the Wuhan Coronavirus outbreak."

The story weaves together unrelated facts to construct a conspiracy theory. Officials are still trying to determine the exact cause of the outbreak, but there’s no evidence of it being created for use as a bioweapon. 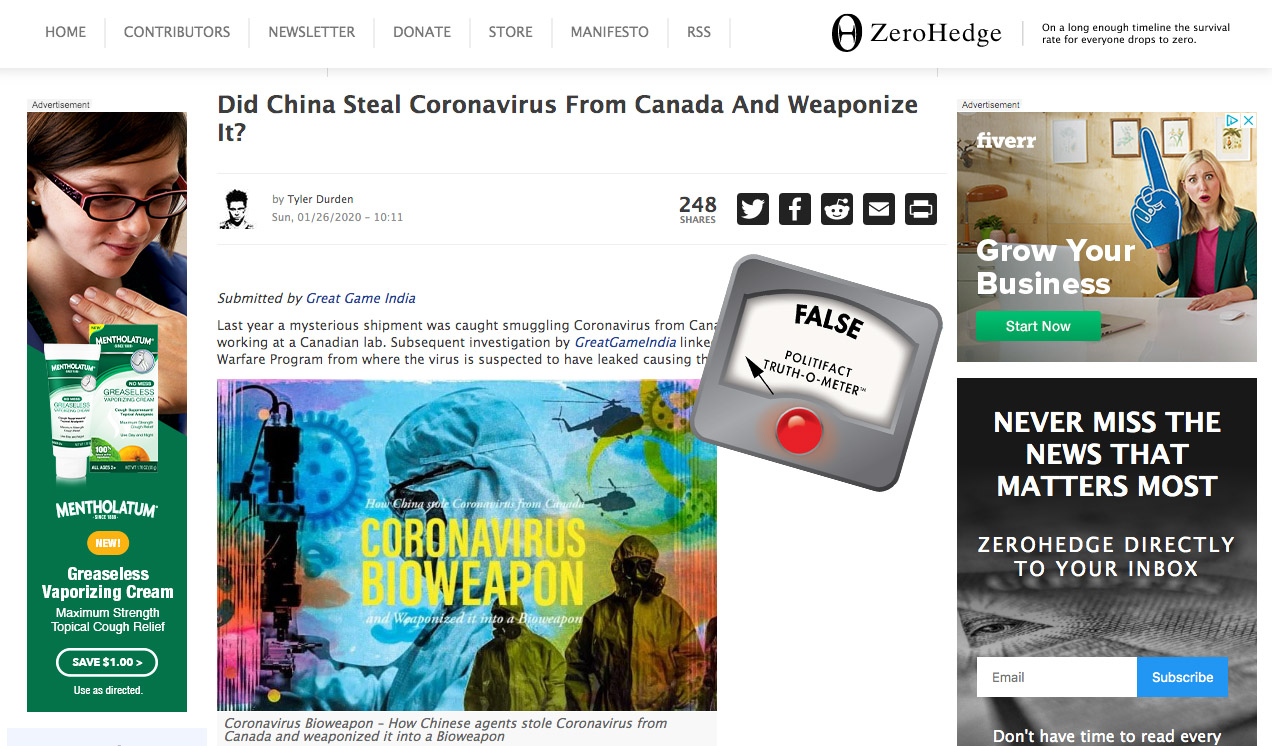 The virus, which originated in the central China city of Wuhan, has infected more than 4,000 people worldwide, and China has restricted travel within the country amid a rising death toll.

Great Game India claims that the current coronavirus outbreak can be traced to Chinese agents who infiltrated a Canadian lab to steal virus samples. But there’s no evidence for that.

The story focuses on the National Microbiology Laboratory in Winnipeg. In 2013, researchers there were investigating a new cluster of coronavirus infections that appeared to have originated in Saudi Arabia.

Great Game India implies that disease is the same one that’s currently affecting China. But the lab was examining the Middle East Respiratory Syndrome (MERS) coronavirus. (There are seven kinds of coronaviruses that can infect humans.)

RELATED: Fact-checking hoaxes and conspiracies about the coronavirus

Great Game India goes on to claim that Chinese scientists working in the Canadian lab were "bio-warfare agents" and took the samples to the Wuhan National Biosafety Laboratory of the Chinese Academy of Sciences.

One of the scientists mentioned in the Great Game India story, Xiangguo Qiu, is under investigation for a possible "policy breach" after she was invited to the Wuhan lab twice a year for two years. Qiu, her husband and her students from China were removed from the lab in July 2019.

There are questions about what information Qiu shared with Chinese officials while visiting Wuhan, and the Canadian National Microbiology Laboratory has sent viruses to China in the past for research. But there is no evidence to support the claim that Qiu stole coronavirus samples and gave them to the Wuhan lab to create biological weapons.

The assertion that the origin of the coronavirus outbreak is a Chinese lab near Wuhan also lacks evidence.

The Wuhan National Biosafety Laboratory is a maximum-security biolab that deals with some of the world’s most dangerous pathogens, such as Ebola and the SARS coronavirus. Some experts have linked the lab to China’s biological warfare program. The country denies having such a program, but the State Department has raised concerns about China’s potential noncompliance with the Biological Weapons Convention, which bans the production of such weapons.

"Coincidentally, the Wuhan National Biosafety Laboratory is located only 20 miles away from the Huanan Seafood Market which is the epicenter of the Coronavirus outbreak dubbed the Wuhan Coronavirus," the Great Game India story reads.

As of now, however, the lab’s proximity to the seafood market is a coincidence, as there is no evidence that the lab is the source of the coronavirus outbreak.

RELATED: No, there is no vaccine for the Wuhan coronavirus

The CDC and the World Health Organization are still investigating the cause of the coronavirus outbreak. In its most recent situation summary, the CDC said that both it and Chinese authorities had isolated the genome of the Wuhan coronavirus.

Their findings suggest "a likely single, recent emergence from a virus related to bat coronaviruses and the SARS coronavirus." Early reports suggested that the disease appeared to have originated at a seafood and animal market in Wuhan, and it spread from there to several Asian countries, Australia, France, Canada and the United States.

A Zero Hedge story claims that Chinese agents stole coronavirus samples from Canada to create a biological weapon, which has now caused an outbreak of the disease around the world.

A Chinese scientist who worked in a Canadian lab studying coronaviruses is under investigation for trips she took to Wuhan. But there’s no evidence she gave China coronavirus samples to develop a biological weapon. Plus, the lab worked on MERS, not the Wuhan coronavirus. The Wuhan lab mentioned in the story does deal with dangerous pathogens like coronaviruses, but there is no evidence that it is the source of the latest outbreak.

The story lacks evidence for its headline, so we rate it False.

U.S. Department of State, "2019 Adherence to and Compliance with Arms Control, Nonproliferation, and Disarmament Agreements and Commitments (Compliance Report)," August 2019

Zero Hedge, "Did China Steal Coronavirus From Canada And Weaponize It?" Jan. 26, 2020