Facebook posts
stated on March 24, 2021 in a post:
"Suez Canal blocked by huge container ship named Evergreen. Evergreen shipping is most likely a cover for human and sex trafficking” by Hillary Clinton.

What do the Suez Canal, Hillary Clinton and a Taiwanese shipping company have in common?

Egyptian authorities are working to remove a 1,300-foot cargo ship that got stuck March 23 in the Suez Canal, a critical shipping route that connects the Red Sea to the Mediterranean Sea. The boat is operated by the Evergreen Group, a Taiwan shipping conglomerate.

Some Facebook users took that as a signal of Clinton’s involvement. 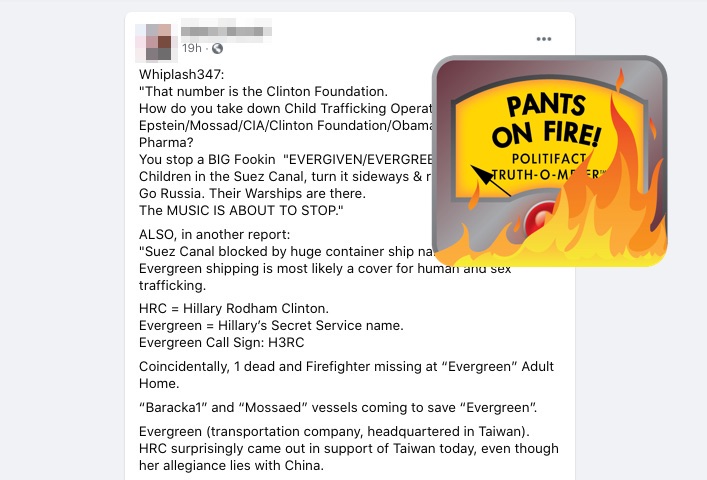 Similar false claims about Clinton, "evergreen" and human trafficking surfaced after the Beirut port explosion in August. The newest example is similarly bogus and traces back to a baseless conspiracy theory that’s been circulating since 2016.

Evergreen Line is the trade name for the five shipping companies owned by the Evergreen Group. The companies comprise the fourth largest container fleet in the world, according to the JOC Group, a logistics intelligence firm.

An Evergreen ship got stuck in a bank of the Suez Canal during a dust storm with high winds, the Wall Street Journal reported. The incident involves an Ever Given ship, which is one of the largest ocean vessels in the world. More than 100 ships are waiting to traverse the canal, dealing a blow to global shipping.

The story turns into fiction with the added elements of Clinton and human trafficking. The conspiracy theory goes like this: Clinton is part of a global child sex trafficking cabal, and her Secret Service codename was "Evergreen." (She confirmed the codename during the 2016 campaign.) Therefore, Clinton is using Evergreen to transport children.

That baseless line is related to the broader Pizzagate and QAnon conspiracy theories about prominent Democrats and child victims.

After the Ever Given ship got stuck in the Suez Canal, QAnon supporters on Telegram and Gab, social media platforms that are popular among conservatives, pointed to the boat’s call sign, H3RC, as evidence to support their theory. Clinton’s initials are HRC.

It’s unclear what cargo the Evergreen ship is carrying, but there’s no evidence that it’s people. We reached out to Evergreen through its website for a comment, but we haven’t heard back.

The post is inaccurate, ridiculous and free of proof. We rate it Pants on Fire!