Displaced by crime, political instability and the COVID-19 pandemic, thousands of migrants from Central America — including unaccompanied children — have arrived at the U.S.-Mexico border over the past few months. Top Republicans in Congress, including House Minority Leader Kevin McCarthy of California, blame the influx on President Joe Biden’s immigration policies.

On Facebook, some users have echoed those talking points.

The post was flagged as part of Facebook’s efforts to combat false news and misinformation on its News Feed. (Read more about our partnership with Facebook.) Similar posts have been shared thousands of times, according to CrowdTangle, a social media insights tool. 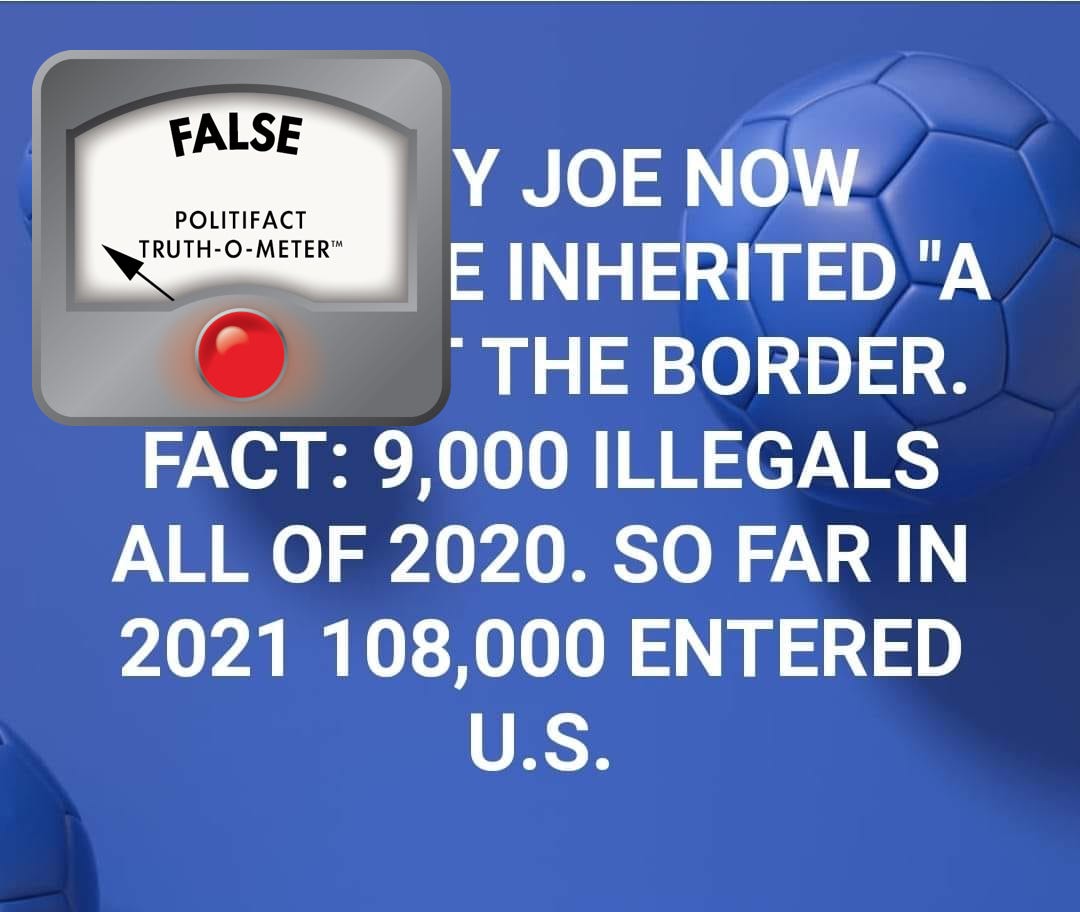 "Let me just say this: Joe Biden inherited a huge mess on immigration, and it’s not going to be cleaned up in a month," Schumer said on a March 11 episode of "The View."

Other Democrats have made similar remarks, but not Biden himself. Still, we wanted to take a closer look at the Facebook post’s claim about border crossings under Trump and Biden.

The post is wrong — there were far more than 9,000 apprehensions at the southwest border in 2020.

The Facebook post doesn’t specify an area of the border or a kind of Border Patrol encounter, so we looked at statistics about apprehensions along the entire southwest border with Mexico.

In March 2020, Trump invoked Title 42, a federal public health law, to allow border officials to quickly expel migrants on the grounds that their entry could contribute to the spread of COVID-19. That means migrants arriving without permission now face either apprehension and removal proceedings, or immediate expulsion.

According to the latest Border Patrol data, there have been 381,636 encounters at the southwest border during the 2021 fiscal year, which started in October. Of those, 64,046 encounters were apprehensions, meaning migrants were taken into custody between ports of entry, and the rest were Title 42 expulsions. In January and February, when Biden was president, there were 172,286 encounters and 39,572 apprehensions.

By comparison, there were 400,651 southwest border encounters during the 2020 fiscal year, which spanned from October 2019 to September 2020. Of those, more than 200,000 were apprehensions. It’s important to note that Border Patrol data on encounters refers to events — not people.

Homeland Security Secretary Alejandro Mayorkas said in a March 16 statement that officials are seeing a surge in attempted border crossings this year.

"This is not new. We have experienced migration surges before — in 2019, 2014, and before then as well," Mayorkas said in the statement. "Since April 2020, the number of encounters at the southwest border has been steadily increasing."

The 108,000 figure in the claim appears to stem from something Texas Gov. Greg Abbott said during a March 9 press conference about immigrants entering the country illegally.

"In all of last year, in the Rio Grande Valley Sector there were about 90,000 apprehensions," Abbott said, citing U.S. Customs and Border Protection officials. "Just this year there have been 108,000 apprehensions there."

The Rio Grande Valley Sector is a Border Patrol service area that covers more than 34,000 square miles of southeast Texas. There are 19 other sectors on the northern and southern borders that report their own apprehension statistics.

RELATED: Did the increase of children arriving at the border start under Trump or Biden?

PolitiFact, "Fact-checking Donald Trump’s claim of ‘best numbers’ at the border," May 20, 2020