President Joe Biden says the U.S. will have enough coronavirus vaccines for all adults by the end of May. On social media, anti-vaccine advocates falsely say that effort could lead to autoimmune diseases and death.

A Feb. 9 video features former Nevada City, Calif., Mayor Reinette Senum and Dr. Sherri Tenpenny, an osteopathic physician. Over the course of an hour, the two women characterize the coronavirus vaccine as "deadly" and a "bioweapon." The video was published on Bitchute, a video platform similar to YouTube, but one that researchers say hosts large amounts of hate speech and disinformation.

A PolitiFact reader asked us to fact-check the video. One claim in particular stuck out:

"Some people are going to die from the vaccine directly," Tenpenny said in the video, which has nearly 1 million views. "But a large number of people are going to start getting horribly sick and get all kinds of autoimmune diseases, 42 days to maybe a year out."

The video was also flagged as part of Facebook’s efforts to combat false news and misinformation on its News Feed. (Read more about our partnership with Facebook.) It has been shared thousands of times on the platform — despite Facebook’s ban on anti-vaccine content. 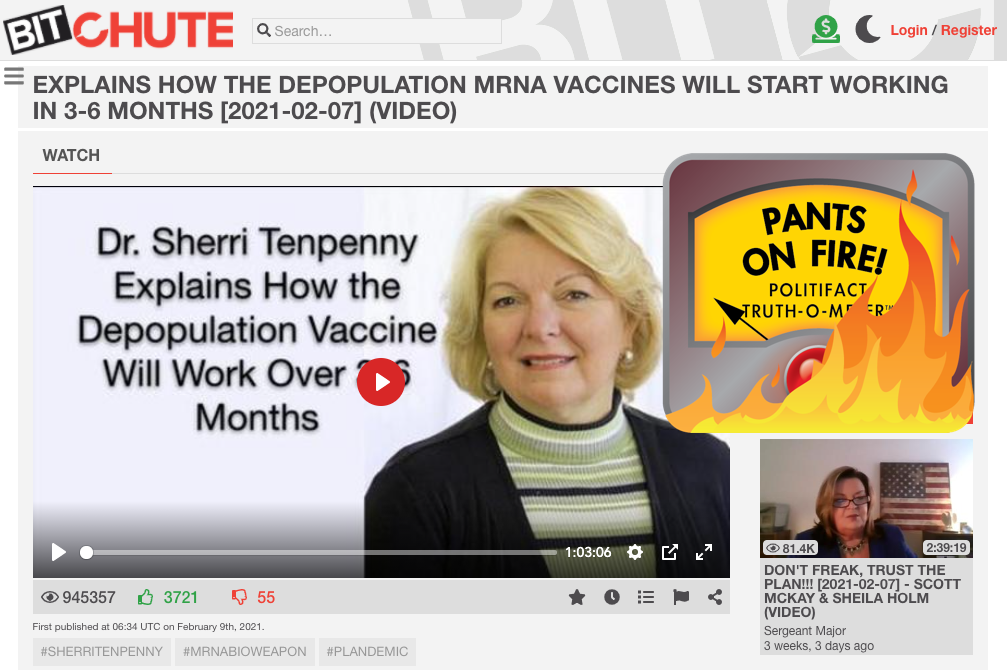 Tenpenny is wrong. There is no evidence to suggest that the COVID-19 vaccines used in the U.S. cause autoimmune diseases or death.

Tenpenny is a licensed osteopathic physician based in suburban Cleveland and the author of "Saying No To Vaccines: A Resource Guide for All Ages." She runs an alternative health clinic and has previously said vaccines cause autism, a claim public health officials have debunked. Her Facebook page was removed in December for spreading misinformation, but her Instagram account still has more than 126,000 followers.

During her interview with Senum — who stepped down from the Nevada City council in July after saying she would not enforce a statewide mask mandate — Tenpenny cited an article she published Dec. 28 on Vaxxter, an anti-vaccine website.

In that article, Tenpenny linked to a study about a phenomenon in other coronaviruses, such as Severe Acute Respiratory Syndrome, in which certain antibodies can actually worsen the disease. The study does not support her claim that COVID-19 vaccines cause autoimmune diseases, which include conditions like type 1 diabetes and rheumatoid arthritis that cause the body to mistakenly attack healthy cells and organs.

The Food and Drug Administration has granted emergency use authorization to three coronavirus vaccines: one from Pfizer-BioNTech, one from Moderna, and one from Janssen, a pharmaceutical company owned by Johnson & Johnson. Clinical trials — which lasted months and included tens of thousands of participants — indicated no connection between the vaccines and autoimmune diseases.

The FDA found "no specific safety concerns" associated with any of the three vaccines. The Centers for Disease Control and Prevention says that safety data does not apply to people with autoimmune conditions, but the vaccines are still recommended.

Millions of Americans have received the coronavirus vaccines. If they caused widespread autoimmune diseases, those instances would be documented in the federal government’s Vaccine Adverse Event Reporting System. But the system indicates only a handful of self-reported autoimmune diseases, and even that data is unverified.

"While very important in monitoring vaccine safety, VAERS reports alone cannot be used to determine if a vaccine caused or contributed to an adverse event or illness," the CDC says. "The reports may contain information that is incomplete, inaccurate, coincidental, or unverifiable."

There have been reports of people who received the coronavirus vaccines and later died. But that doesn’t mean the vaccine killed them — the vaccines have been proven to be safe and effective in tens of thousands of people.

We reached out to Tenpenny for a comment, but we haven’t heard back.

Her claim is inaccurate and ridiculous. We rate it Pants on Fire!

CORRECTION: This story was updated June 15, 2021, to correct an error regarding Tenpenny's profession. She is an osteopathic physician.

Amazon, "Saying No To Vaccines: A Resource Guide for All Ages"

Associated Press, "Biden stands by May timeline for vaccines for all US adults," March 3, 2021

Centers for Disease Control and Prevention, COVID-19 Vaccinations in the United States

The Guardian, "Facebook bans misinformation about all vaccines after years of controversy," Feb. 8, 2021

PolitiFact, "A Nashville nurse did not develop Bell’s Palsy after receiving the COVID-19 vaccine," Dec. 30, 2020

The Washington Post, "The Trump administration bailed out prominent anti-vaccine groups during a pandemic," Jan. 18, 2021