Police work on the scene outside of a King Soopers grocery store where authorities say multiple people were killed in a shooting on March 22, 2021, in Boulder, Colo. (AP)

Hours after 10 people were gunned down at a supermarket in Boulder, Colo., some people logged on to social media to say the shooting was staged.

"So called shooting in Boulder, CO is fake...false flag like most of the others. Don't doubt me on this," one Facebook user wrote in a text post.

The posts were flagged as part of Facebook’s efforts to combat false news and misinformation on its News Feed. (Read more about our partnership with Facebook, which owns Instagram.) 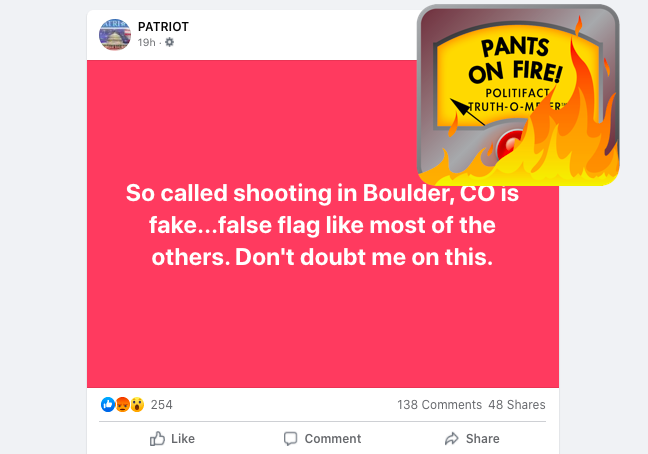 On March 22, a gunman walked into a King Soopers grocery store in Boulder, a college town northwest of Denver, and killed 10 people — including one police officer. Police have arrested 21-year-old Ahmad Al Aliwi Alissa of Arvada, Colo., who was injured during the shooting, in connection with the attack. Authorities have not established a motive.

Viral image
stated on October 27, 2022 in an Instagram post
Photo shows a man who tortured his daughter’s rapist.

There is no evidence the attack was staged. False claims that mass shootings are staged have circulated on social media for years.

The video in the Instagram post was captured by bystander Dean Schiller. It shows people lying motionless outside and inside King Soopers while a gun is fired in the background. Police radio traffic from the time of the shooting described a similar scene.

"At approximately 2:40 p.m. on Monday, March 22, officers were dispatched to the King Soopers at 3600 Table Mesa Drive for a report of an active shooter," says a timeline from the Boulder Police Department. "Officers arrived on scene within minutes and immediately entered the store and engaged with the suspect. There was an exchange of gunfire during which the suspect was shot."

Authorities have shared the names of the shooting victims. Both the Boulder Police Department and the FBI are investigating the attack.

False flag conspiracy theories are a popular form of misinformation following mass shootings. There is no evidence to support the notion that shootings are regularly staged, planned or otherwise faked.

The posts are inaccurate and ridiculous. We rate this one Pants on Fire!

PolitiFact, "Why do some people think mass shootings are staged every time?" Aug. 8, 2019