Facebook posts
stated on March 31, 2021 in a video:
"mRNA is not a vaccine" — it's "actually an operating system" that's run by Bill Gates to program humans.

In this March 29, 2021 file photo, a worker readies syringes with the Moderna COVID-19 vaccine in Metairie, La. (AP)

The technology behind two coronavirus vaccines approved for emergency use in the U.S. is actually an operating system aimed at programming humans. The programmer? Billionaire philanthropist Bill Gates.

That’s not the plot of a science fiction movie — it’s a bogus conspiracy theory in a video seen more than 48,000 times on Facebook.

"The new so-called experimental vaccine, what’s new about it? The real new and amazing thing about it is that it’s not even a vaccine — mRNA is not a vaccine," a man says in the March 31 video, which includes other anti-vaccine claims. "The CEO of Moderna boasts about the fact that the mRNA vaccine is actually an operating system, such as you would put in your computer."

"And of course who’s the great programmer who has bestowed upon himself the title of the grand programmer of humanity? Well it’s Bill Gates himself." 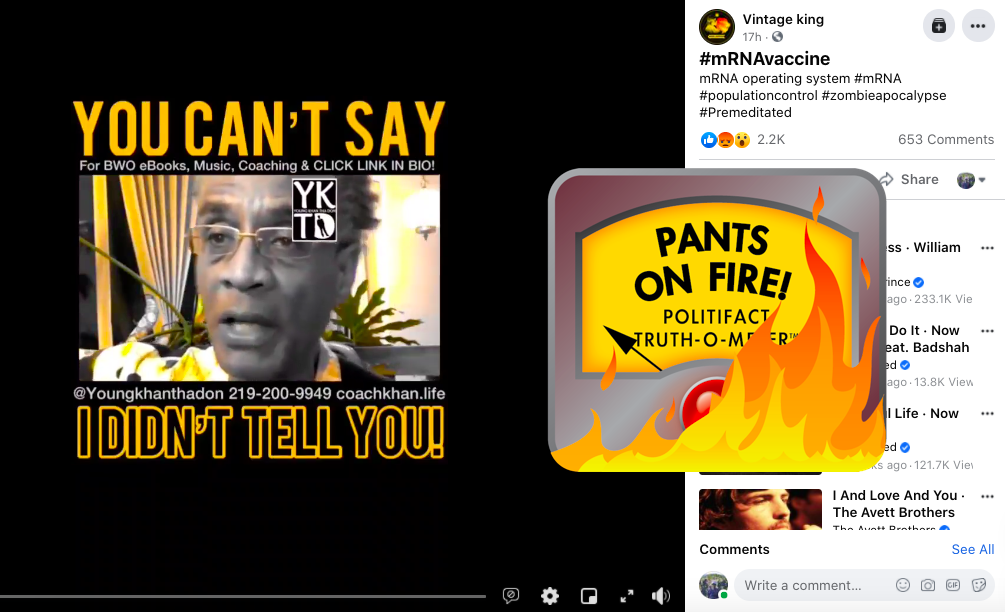 The video was flagged as part of Facebook’s efforts to combat false news and misinformation on its News Feed. (Read more about our partnership with Facebook.) It was originally posted on the Instagram page of Damon Jones, a personal development coach who did not respond to our request for comment.

The video is ridiculously wrong. COVID-19 vaccines help prevent the spread of the coronavirus — they are not part of a Gates-run plot to program humans.

mRNA stands for messenger RNA. Most vaccines put weakened or inactivated germs in the body to activate an immune response, but mRNA vaccines don’t. Instead, they tell human cells how to make the spike protein that’s present on coronavirus virions. That protein trains the body’s immune system to create antibodies, which can prevent future COVID-19 infection.

Vaccines from Pfizer-BioNTech and Moderna use mRNA to inoculate people against the coronavirus. On its website, Moderna likens the technology to an "operating system on a computer."

"It is designed so that it can plug and play interchangeably with different programs," the company says. "In our case, the ‘program’ or ‘app’ is our mRNA drug — the unique mRNA sequence that codes for a protein."

The Facebook video is inaccurate and ridiculous. We rate it Pants on Fire!

RELATED: False vaccine claims persist on Facebook, despite a ban. Here’s why