Facebook posts
stated on February 15, 2021 in a text post:
Says Joe Biden planned a winter storm as "warfare, an attack on Texas by altering the jet stream."

A powerful winter storm has left millions of people without power in Texas amid freezing temperatures.

Some Facebook users blamed President Joe Biden — not for a particular policy, but for the storm itself.

In a Feb. 15 post, Scott L. Biddle wrote that the storm resulted from "weather manipulation and controlling the jet stream" — something he assured people is "not a conspiracy theory."

"Joe Biden's ‘Dark Winter’ statement was not a random thought, it was a foreshadow of what was to come," Biddle wrote. "Texas is the only state to have its own, entirely independent electric grid separate from the rest of the United States. This is warfare, an attack on Texas by altering the jet stream, seeding the clouds, and ultimately causing the storm that blacked out over 4 million people."

"Sound crazy? Too hard to believe? Believe it." 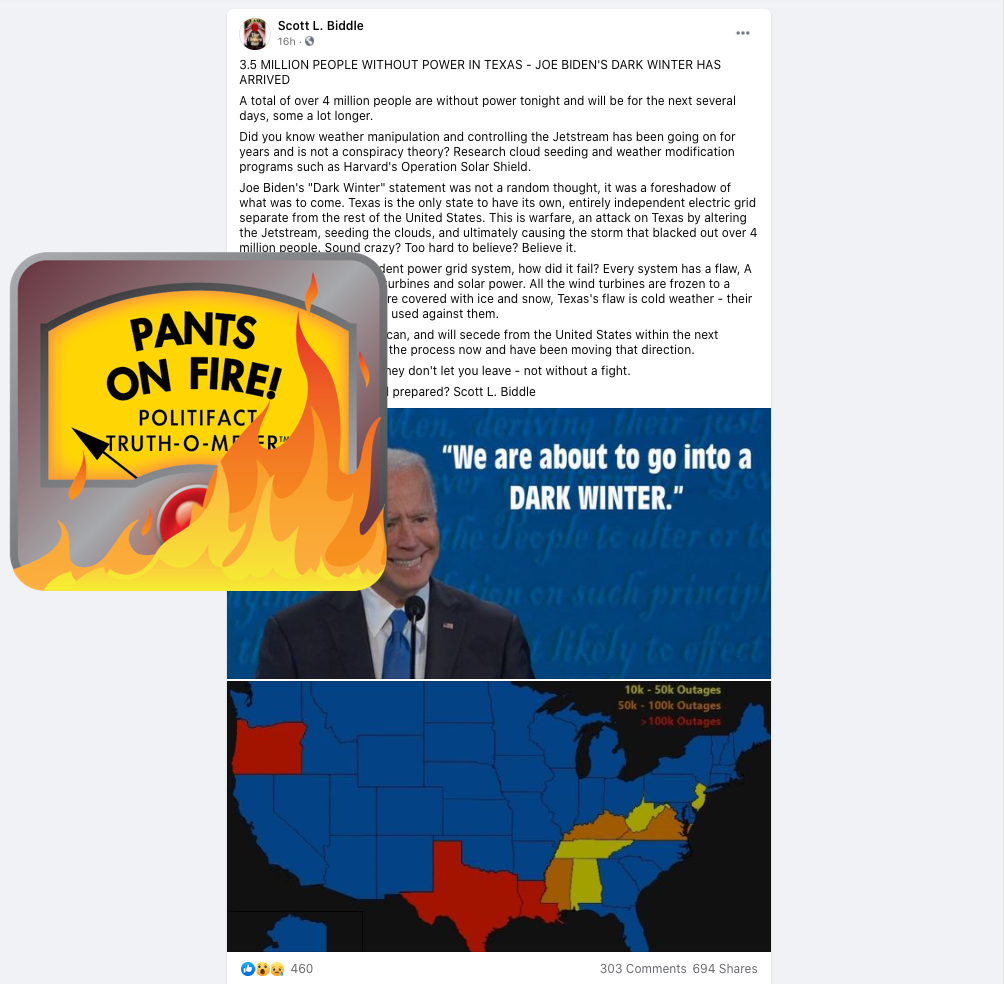 The post was flagged as part of Facebook’s efforts to combat false news and misinformation on its News Feed. (Read more about our partnership with Facebook.) We reached out to Biddle — who wrote a book of COVID-19 conspiracy theories that was removed from Amazon — but we haven’t heard back.

What he said isn’t true.

First, let’s examine the "‘dark winter’ statement." In November, Biden said the coronavirus pandemic could worsen over the winter months as Americans traveled for the holidays and were forced indoors by colder weather.

"We’re still facing a very dark winter," he said. "There are now nearly 10 million COVID cases in the United States."

Biden was not predicting a winter storm — he was predicting an influx of new daily COVID-19 cases and deaths, which hit record highs in early January and February, consecutively.

Now onto the Facebook post’s claim about Texas’ power grid. In 1970, the state created the Electric Reliability Council of Texas to avoid regulation from the federal government. The electric grid is not subject to the jurisdiction of the Federal Energy Regulatory Commission.

However, that doesn’t mean the Biden administration altered the weather to attack Texas’ energy infrastructure.

The winter storm first hit the Pacific Northwest between Feb. 12-13, leaving hundreds of thousands of people without power. Then, it moved through the Southwest before hitting the central and southern plains.

The storm resulted from a polar vortex that brought Arctic air from Canada to many parts of the U.S. A polar vortex is a large area of low pressure and cold air surrounding the Earth’s poles. It weakens in the summer and strengthens in the winter, when the vortex expands and sends cold air southward with the jet stream.

The jet stream is the product of strong winds created by Earth’s rotation on its axis — it would not be possible for the government to somehow step in and shake things up. The only measurable effect humans are thought to have on the jet stream is through climate change.

"Cloud seeding," on the other hand, is a real technique that’s sometimes used to produce moisture in drought-prone areas. Aircraft inject particles into clouds to encourage water droplets to freeze around them. In the right conditions, the process can create snow. Again, that’s not what is happening in Texas and many other parts of the country.

Cloud seeding has been cited as evidence for the chemtrails conspiracy theory, which falsely claims the government uses aircraft to spray chemicals in the sky to control the population. We found posts from Biddle in groups dedicated to the conspiracy theory.

Lead Stories, "Fact Check: Trees Photographed In Europe Were NOT Chopped Down For 5G," April 14, 2020

National Weather Service, "What is the Polar Vortex?"

USA Today, "Why is it so cold? How the polar vortex brings record low temperatures and winter storms," Feb. 16, 2021

The Washington Post, "More than 485,000 people have died from coronavirus in the U.S."