Fox News on-air commentator Kayleigh McEnany, then the White House press secretary, speaks during a briefing at the White House on Dec. 2, 2020, in Washington. (AP/Vucci)

Fox News on-air commentator and former White House press secretary Kayleigh McEnany slammed President Joe Biden for the influx of migrants at the U.S. border with Mexico, likening the situation to a surge Biden and other top Democrats described in dire terms years ago.

"The Biden administration has created an immigration crisis on our border," McEnany wrote March 8 on Facebook and Twitter. "They refuse to call it a crisis, though apprehension numbers are worse than the ‘crisis’ Biden/Obama/Pelosi acknowledged in 2014!"

Later that day, McEnany made the same point on Fox News. "In 2014, when the numbers were not as bad as they are now in terms of apprehensions, Biden called it a crisis then," she told anchor Martha MacCallum. "So did Obama. So did Pelosi."

McEnany’s Facebook post was flagged as part of Facebook’s efforts to combat potential false news and misinformation on its News Feed. (Read more about our partnership with Facebook.)

In this case, the former White House press secretary’s claim is largely accurate.

U.S. Customs and Border Protection data shows that the pressure at the border is elevated compared to what border officials saw in 2014, with some caveats.

McEnany referred to apprehensions, which CBP defines as "the physical control or temporary detainment of a person who is not lawfully in the U.S. which may or may not result in an arrest."

But her comparison across years is a little tricky, because during the coronavirus pandemic, not all encounters between Border Patrol and migrants have been recorded as apprehensions.

"Back in 2014, apprehensions meant anyone who was taken into custody by Border Patrol when they tried to cross the border illegally between ports of entry," said Jessica Bolter, an associate policy analyst with the Migration Policy Institute. "Today, it’s a little bit more complex."

In March 2020, President Donald Trump invoked Title 42, a section of federal law, to allow border officials to quickly expel migrants seeking admission into the U.S. on the grounds that their entry into the country and immigration system could contribute to the spread of COVID-19.

As a result of the order, migrants caught crossing the border illegally can now face one of two fates, Bolter said. They can be apprehended and put into immigration removal proceedings, or they can be immediately expelled, in which case they wouldn’t begin immigration proceedings.

The Border Patrol in January 2021 recorded 75,312 encounters at the southern border between ports of entry. In February, it recorded 96,974 such encounters, according to the most recent CBP data available. 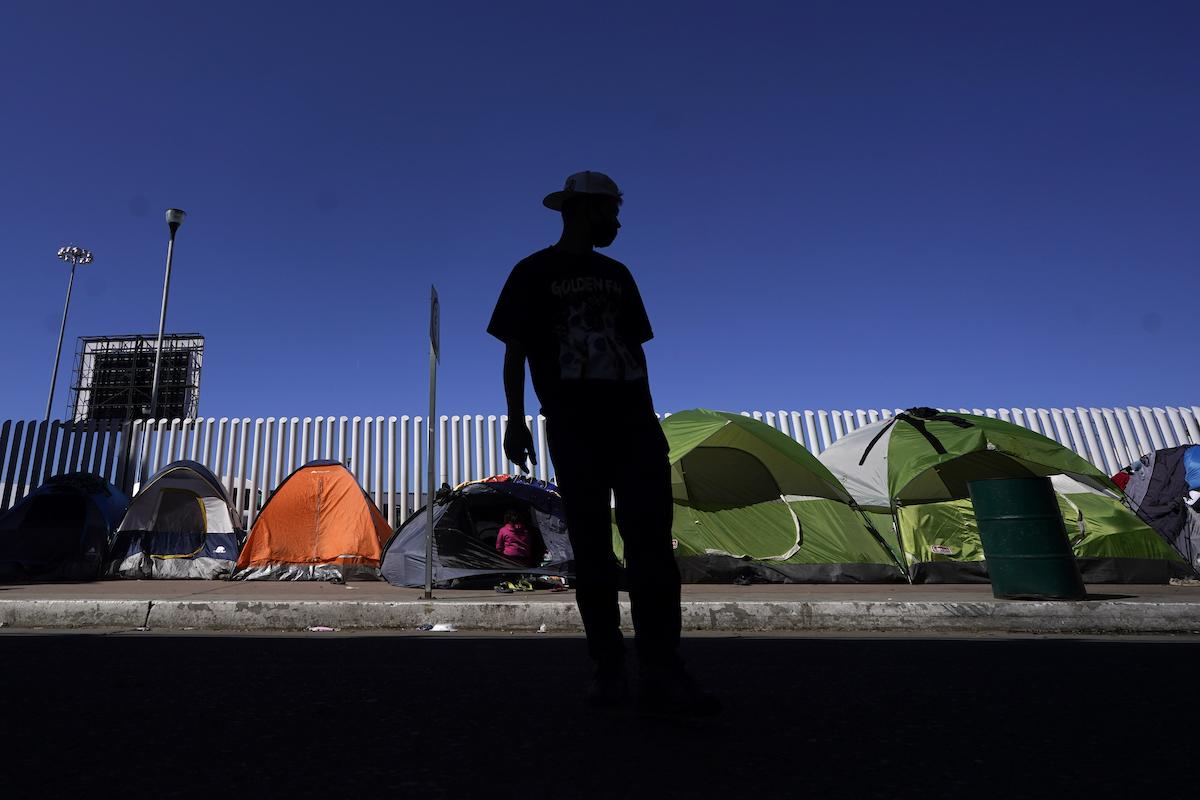 A migrant from Honduras seeking asylum in the U.S. stands in front of tents at the border crossing on March 1, 2021, in Tijuana, Mexico. (AP)

We should note that only 12,781 of the encounters in January 2021 and 26,791 of the encounters in February 2021 were apprehensions made under CBP’s immigration authority. The rest were Title 42 expulsions. That means, generally, that Border Patrol processed unauthorized border crossings at a much faster pace in 2021 than they could have in 2014.

It also means that not all the migrants caught trying to unlawfully cross the border now are being held in the country as they move through the immigration system.

Regardless, experts PolitiFact spoke to said it was fair to lump apprehensions and Title 42 together for the sake of comparison, as McEnany did in her post.

"When you look at them together, that’s the total number of times someone was caught trying to cross the border illegally between ports of entry," Bolter said, noting that what is logged today as a Title 42 expulsion would have registered as an apprehension in 2014.

"Border security metrics can be complex and terminology is not always used in the same way we would officially use it," added Matthew Dyman, a CBP spokesperson.

That year, the border saw an influx of unaccompanied children and families that was broadly acknowledged as a crisis, Bolter said.

"That was kind of the first time that the U.S. government had to deal with these mass arrivals of families and children, and they had to deal with that with an infrastructure that was really set up to carry out enforcement against single adults," Bolter said. "They were pretty unprepared."

Speaking in Guatemala in June of 2014 about migrants apprehended at the U.S. border who were claiming credible fear, Biden said the U.S. was working quickly to process their cases "in light of the humanitarian crisis caused by the number of crossings." 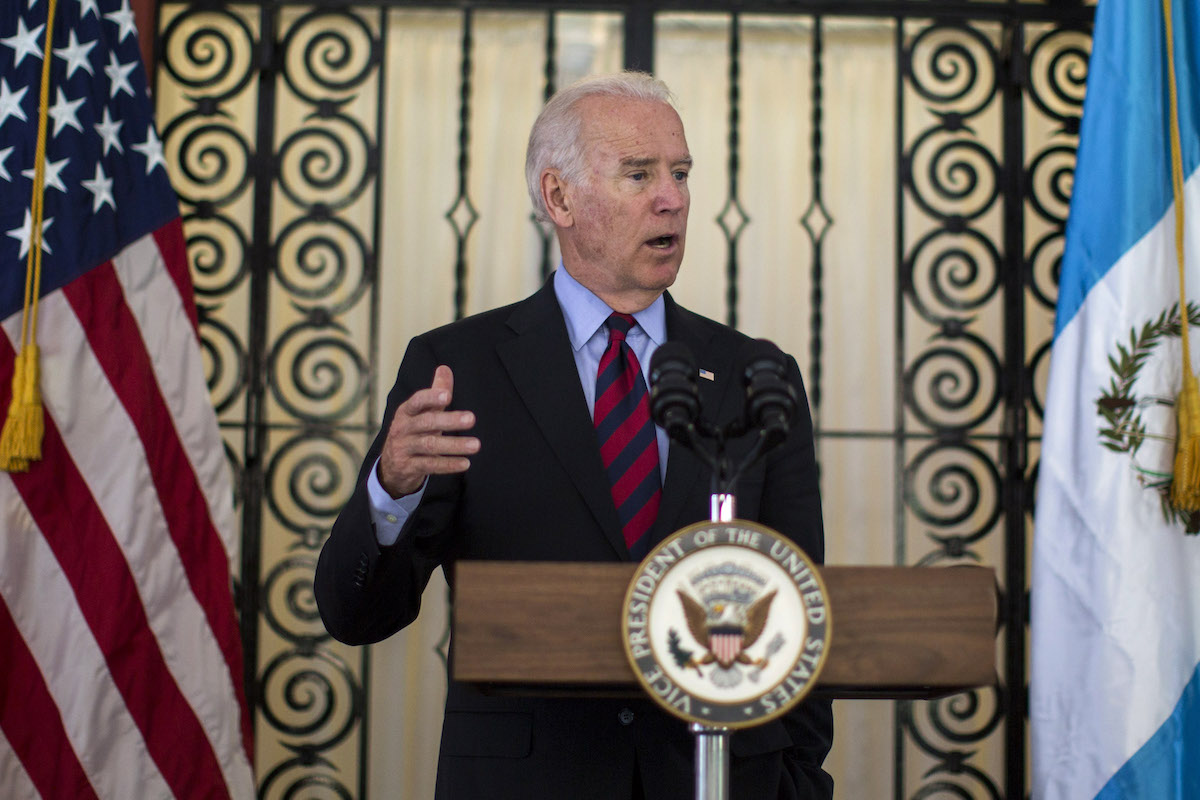 The Biden administration has not characterized things that way this time. Biden’s Homeland Security secretary said the border situation amounted to a "challenge," not a "crisis."

Border Patrol recorded roughly 9,300 apprehensions (and four Title 42 expulsions) involving unaccompanied minors in February 2021, and about 18,900 apprehensions and expulsions involving members of family units. Together, those two groups made up roughly 30% of such encounters that month.

That compares to roughly 10,600 unaccompanied minor apprehensions and 16,300 family unit apprehensions in June of 2014, which accounted for about 47% of all apprehensions made in what was the peak month that year for those two statistics.

The Trump administration’s order authorizing Title 42 expulsions encouraged some migrants — particularly single adults — to try crossing the border again after being sent away, since migrants expelled from the U.S. don’t face consequences via the criminal or immigration system, Bolter said.

The increased recidivism rate could inflate CBP’s numbers slightly, Bolter said, although she noted that news reports do show more migrants are arriving at the border, regardless.

Jessica Vaughan, director of policy studies for the Center for Immigration Studies, which supports low levels of immigration, said the current situation is more worrisome.

"It's worse (than 2014) because there are more people attempting to enter illegally, and it's worse because it is happening during a pandemic," Vaughan said.

McEnany said that "apprehension numbers are worse than the ‘crisis’ Biden/Obama/Pelosi acknowledged in 2014!"

The word "apprehension" can be confusing. If you count expulsions from the country under the Title 42 authority Trump invoked at the start of the coronavirus pandemic, then McEnany is right.

Border officials recorded more cases in which someone was caught trying to cross the border illegally this January and February than they did during the peak months in 2014.

The White House of President Barack Obama, "Remarks by the President on Border Security and Immigration Reform," June 30, 2014

Business Insider, "Nancy Pelosi Calls The Humanitarian Crisis At The US Border An 'Opportunity,'" June 28, 2014

The White House of President Barack Obama, "Remarks to the Press with Q&A by Vice President Joe Biden in Guatemala," June 20, 2014

PolitiFact, "Fact-checking Donald Trump’s claim of ‘best numbers’ at the border," May 20, 2020

Email interview with Jessica Vaughan, director of policy studies for the Center for Immigration Studies, March 9, 2021