Facebook posts
stated on July 15, 2022 in a Facebook post:
"Antifa was already inside the Capitol with floor plans dressed as Trump supporters" on Jan. 6, 2021, proving the attack “was 100% a setup."

False claims blaming antifa activists for the violence at the U.S. Capitol on Jan. 6, 2021, took off as soon as former President Donald Trump’s supporters stormed the building.

More than a year and a half later, those claims continue to spread online — despite having been thoroughly debunked. "Antifa was already inside the Capitol with floor plans dressed as Trump supporters," said the text over a viral Facebook post shared July 15. "This was 100% a setup." 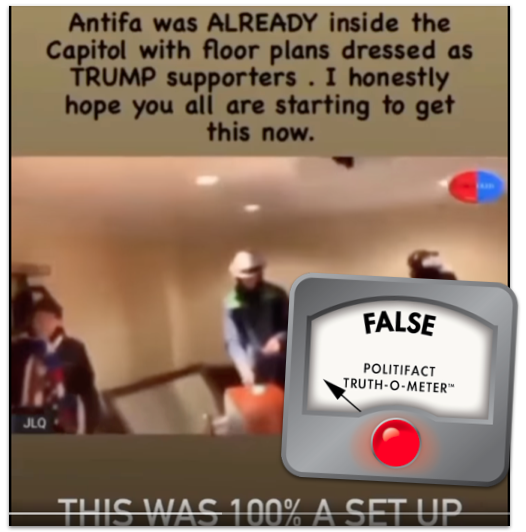 The post featured a video that first circulated days after the attack. It shows rioters discussing the Capitol’s layout from inside the building. One voice can be heard asking, "What’s the floor plan?" Another says, "We just need a plan. We need enough people. We need to push forward."

Speaking into a bullhorn through a broken window, a woman is captured on the video shouting instructions to the rioters inside. She tells them in detail about the layout of an adjacent room in the Capitol and urges them to "coordinate together if you are going to take this building."

Contrary to what the Facebook post claims, there is no evidence that the rioters in the video were "already" positioned inside the Capitol before the attack began. Separate footage captured from the same part of the Capitol shows several rioters climbing inside the room through the broken window before and after one rioter yells the expression heard on the Facebook video: "We just need a plan. We need enough people. We need to push forward."

The video also does not show a "setup" by members of antifa. Antifa is a loosely organized coalition of anti-fascist left-wing activists commonly scapegoated for domestic unrest.

The Chicago Project on Security and Threats, a group at the University of Chicago, has examined the cases of more than 900 people who had been charged with crimes relating to the attack. The team has found "no evidence" of antifa involvement, research director Keven Ruby told PolitiFact. That has not wavered since FBI assistant director Steven D’Antuono said two days after the attack that the agency had "no indication" that antifa played a role.

PolitiFact could not identify all the rioters in the Facebook post’s video. But the faces in the video included known Trump supporters such as Mariposa Castro of California, whose social media activity indicated that she was a fan of Trump’s, according to court documents. Castro had attended Trump rallies, and her attorney said she went to Washington to support Trump. She pleaded guilty to one count of parading, demonstrating or picketing in the Capitol. She was sentenced in February to 45 days in prison and a $5,000 fine.

Court documents say Castro attended Trump’s rally at the White House Ellipse. Later, after seeing news reports from her hotel of the chaos outside the Capitol, she went to the building and climbed inside through the broken window; she was not "already" inside before the attack started.

The woman seen in the Facebook video shouting directions to "coordinate" through a bullhorn is Rachel Powell of Pennsylvania, who started embracing Trump during his presidency and voted for him in 2020, she told The New Yorker. Powell was indicted on eight counts in March 2021. She has pleaded not guilty on all counts. Her case has not yet gone to trial.