Trump supporters gather outside the Capitol on Jan. 6, 2021, in Washington. (AP/Balce Ceneta)

In a violent scene like no other in American history, a sprawling crowd of President Donald Trump’s supporters stormed the U.S. Capitol and halted congressional proceedings, wearing and waving Trump-branded paraphernalia and flags as they sought to overturn the election.

Lawmakers were evacuated as the rioters overwhelmed Capitol Police and bashed through the building’s doors and windows. One woman was fatally shot, and at least three others died.

The march to the Capitol was weeks in the making. Trump urged his supporters to come to Washington. Plans indicating the potential for violence were drawn up in the open on social media forums and pro-Trump websites.

"Storm the Capitol," one user on TheDonald, a site for Trump supporters, wrote Jan. 2, after another asked what would happen if Congress refused to flip the election in Trump’s favor.

Despite all of the groundwork and documentary evidence, social media users and allies of the president floated an alternate explanation for the insurrection.

The siege was not the fault of Trump supporters, they said. Instead, it was led by antifa, a broad left-wing coalition of anti-fascist activists.

There’s no evidence that’s the case, and specific individuals who were rumored to be antifa activists don’t actually support the movement. One man identified as an "antifa thug," for example, was a known supporter of the baseless QAnon conspiracy theory who also backs Trump.

There’s also no evidence that the mob was a "false flag" attack led by antifa activists aiming to make Trump supporters look bad or push a liberal agenda, as some people suggested.

Still, the false narrative traveled between message boards, social media and some of the loudest conservative voices in media and politics. It reached the House floor when Rep. Matt Gaetz, R-Fla., suggested the Capitol’s breach was led by the activists in disguise.

"There is no evidence of antifa involvement, and the notion that they would pretend to be far-right militants in this context makes absolutely no sense," said Mark Bray, a historian and part-time lecturer at Rutgers University who wrote a book about antifa.

How the rumors spread

Mentions of "antifa" and "false-flag" started to take off on 4chan, an anonymous online forum, around noon on Jan. 6, according to data from the Social Media Analysis Toolkit.

A little after 1 p.m. EST, when rioters pushed past barricades at the Capitol, posts in pro-Trump Facebook groups claimed antifa activists were to blame. They cited a Breitbart live stream that showed rioters brandishing Trump paraphernalia. Some speculated that antifa was involved. 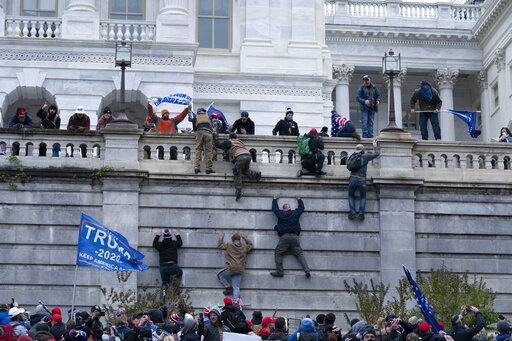 "I do not believe that the group of people who ‘broke through security’ at the Capitol were actually Trump supporters," said Kevin McCullough, a radio personality, in one of the earliest posts PolitiFact identified. "There have been multiple reports that antifa was planning on infiltrating the crowds."

The antifa narrative soon gained traction on Parler, a social media platform popular with conservatives, and on Twitter. An NBC News analysis identified thousands of tweets posted Jan. 6 that alleged that antifa activists were "posing" as Trump supporters.

Lin Wood, an attorney who has filed lawsuits seeking to overturn the presidential election, said on Parler that he had "indisputable photographic evidence" of antifa involvement. Twitter suspended his account for claiming the Capitol breach was "staged."

"This has all the hallmarks of Antifa provocation," Gosar wrote at 5:04 p.m. EST.

"We did have some advanced warning that there might be some antifa elements masquerading as Trump supporters in advance of the attack on the Capitol," Brooks told Fox News host Lou Dobbs, repeating the rumor he shared on Twitter.

Those broadcasts came before Congress reconvened to count the electoral votes and confirm Joe Biden’s victory. The next morning, radio host Rush Limbaugh drove the false narrative home to millions of listeners.

"Republicans do not join protest mobs, they do not loot, and they don't riot to the grand disappointment of many people," Limbaugh said. "But a tiny minority of these protesters, and undoubtedly including some antifa Democrat-sponsored instigators, did decide to go to the Capitol to protest."

No evidence antifa was behind the riot

There’s no way to identify everyone who participated, and investigations by law enforcement agencies, including the FBI, are underway. But no one claiming that antifa activists stormed the Capitol has provided legitimate proof.

The evidence that Trump supporters participated, however, is indisputable. 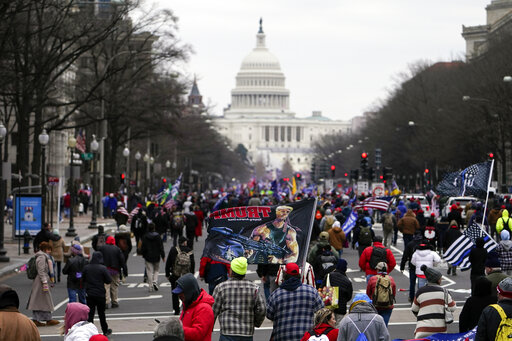 Supporters of President Donald Trump march on Pennsylvania Avenue towards the U.S. Capitol on Jan. 6, 2021, in Washington. (AP)

Video and photographs from the scene show people wearing and waving Trump-branded hats, T-shirts and flags. Some rioters celebrated their participation or live-streamed the events, including a West Virginia GOP lawmaker.

Trump’s supporters had planned a Washington rally for weeks. Trump tweeted his invitation and welcomed their presence. Speaking to the large crowd of supporters hours before the violence erupted, he urged a march to Congress and suggested he would join. He did not. 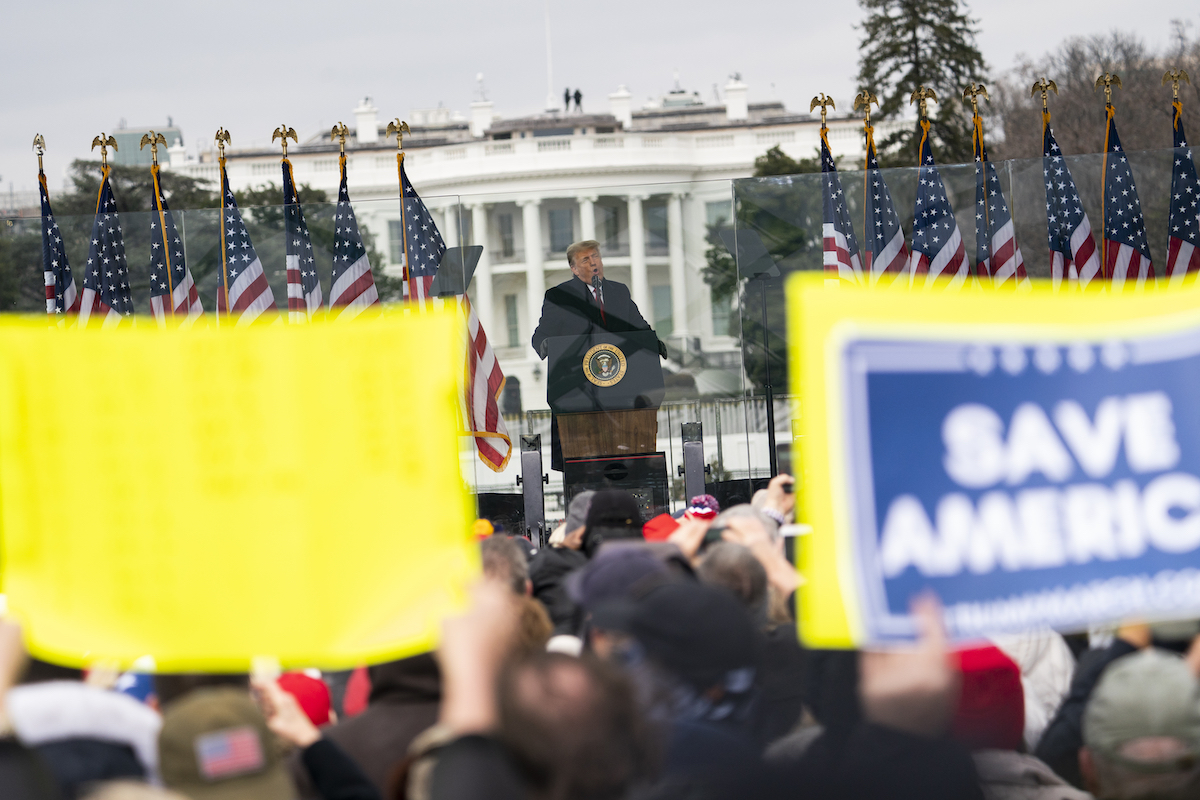 The U.S. Capitol Police chief and the acting attorney general released statements saying they are investigating the events, and neither statement mentioned antifa. Acting Homeland Security Secretary Chad Wolf said, "We now see some supporters of the President using violence as a means to achieve political ends. This is unacceptable."

Several social media posts claimed that specific people were really with antifa, using photos and screenshots. But these cases were disproven by PolitiFact and other fact-checkers.

Gaetz cited an article on the House floor that claimed that a facial recognition firm had matched two men seen in the Capitol to two Philadelphia antifa members. But the claims in that article have been disputed, and the firm denied having identified any antifa members.

Other claims promoted on social media were less specific but similarly lacking in evidence, such as the unsubstantiated allegation that antifa members were bussed to Washington, or the related claim that police escorted multiple buses in.

Paxton shared the rumor that "at least 1 ‘bus load’ of antifa thugs infiltrated peaceful Trump demonstrators." The rumor appeared to originate with a commentator who cited an anonymous former FBI agent and no other evidence. 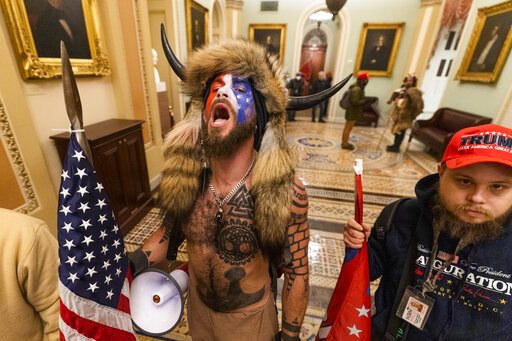 A supporter of President Donald Trump chants outside the Senate Chamber inside the Capitol on Jan. 6, 2021 in Washington. (AP)

A history of blaming antifa

Fact-checkers are accustomed to fact-checking claims about "antifa" that don’t check out.

Antifa activists are predominantly made up of communists, socialists and anarchists who seek to reject white supremacy without the help of police. Sometimes its activists use violence. Experts have said the bulk of antifa organizing is nonviolent.

Scrutiny of antifa picked up after groups counter-protested white nationalists in August 2017 during the "Unite the Right" rally in Charlottesville, Va. After a car plowed into protesters and killed a woman, a false news website claimed, falsely, that an antifa activist was behind the wheel.

Later that year, antifa was wrongly blamed online for several attacks, such as the Las Vegas massacre. More recent claims have blamed antifa for wildfires and violent protests.

When nationwide protests against police brutality turned violent over the summer, Trump blamed antifa for looting businesses and picking fights with police.

Government intelligence reports, media reports and experts have offered no evidence that antifa played any significant role in violent protests against police brutality.

Experts say the movement gets scapegoated for riots and insurrections because of its left-wing bent and history of using violence to achieve its goals.

"Clearly the purpose of such baseless claims is to denounce the attack on the Capitol without having to disown any fraction of Trump’s base and discredit the left at the same time," Bray said.

UPDATE (Jan. 8, 2021): This story has been updated to include a Jan. 8 press briefing comment by FBI assistant director Steven D’Antuono, as well as more reporting about those who entered the Capitol.

CORRECTION (Dec. 13, 2021): U.S. Reps. Mo Brooks and Paul Gosar tweeted claims about antifa on Jan. 6, 2021, at 2:20 p.m. and 5:04 p.m. EST, respectively. An earlier version of this story incorrectly stated the times of these tweets based on archived versions of the tweets captured in different time zones.

The Washington Post, "Rep. Matt Gaetz and other GOP politicians baselessly suggest antifa is to blame for pro-Trump mob rioting into Capitol," Jan. 7, 2021

The Washington Post, "How pro-Trump insurrectionists broke into the U.S. Capitol," Jan. 6, 2021

Media Matters for America, "Sean Hannity speculates "groups like antifa" are the ones storming the US Capitol," Jan. 6, 2021