Facebook posts
stated on June 28, 2022 in a Facebook post:
An image shows a “UFO photographed on June 21, 2014 by the pilot from the cockpit of an F-16 military plane flying near Lackland Air Force Base of the United States located in San Antonio, Texas.”

A viral Facebook post falsely claims to show an image of a U.S. military fighter pilot looking out the cockpit window at UFO — all in broad daylight.

"UFO photographed on June 21, 2014 by the pilot from the cockpit of an F-16 military plane flying near Lackland Air Force Base of the United States located in San Antonio, Texas," said one June 28 Facebook post. An identical post from a different account went viral in March.

There’s no evidence the image shows an authentic photo of an Air Force pilot flying beside a real UFO, as the Facebook caption claims. PolitiFact found no reports in Google or the Nexis news database about any such sighting near San Antonio.

Rather, the image is just one iteration of a years-old meme, edited in each instance with different art to depict various objects flying in the sky outside the pilot’s cockpit window. 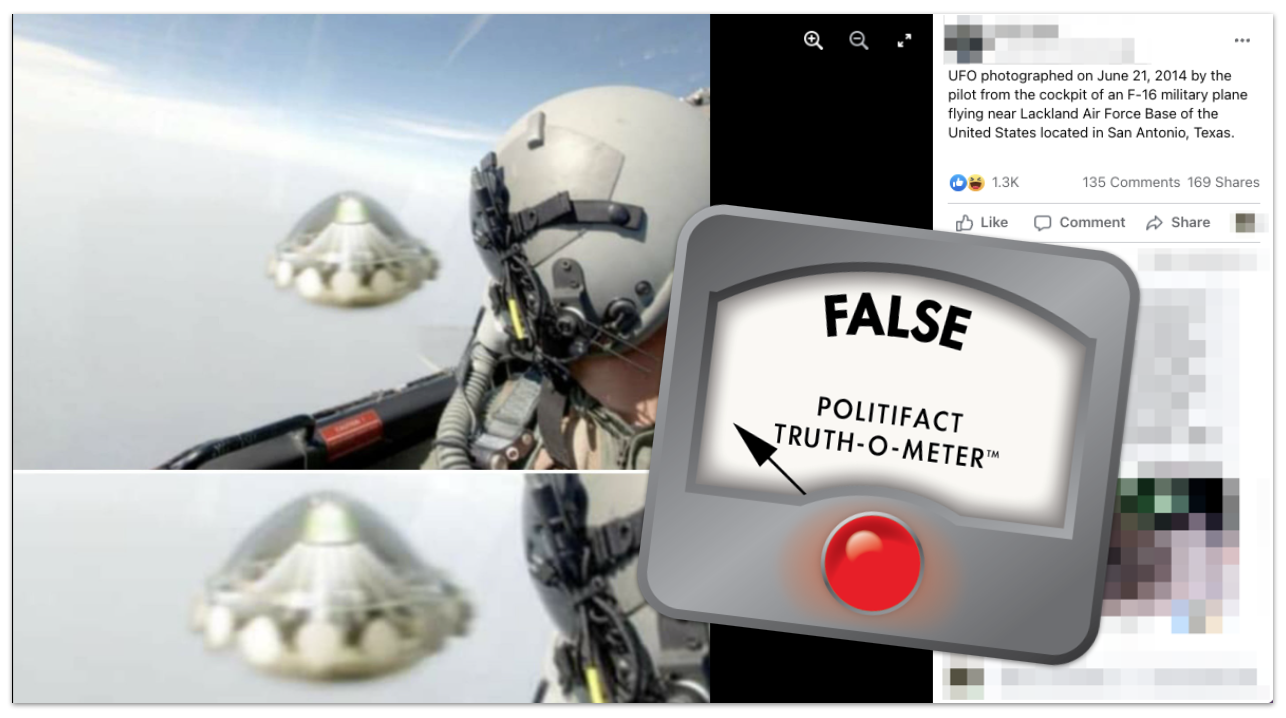 Reverse image searches turned up several other variations of the meme, including versions from as early as 2008 that depict the same pilot looking out the window at a giant cat riding atop a fighter jet. That’s six years before the date the Facebook post claimed the photo was taken.

The earliest version of the image PolitiFact found featuring the supposed UFO was from 2016.

Multiple commenters under the Facebook posts sharing the image depicting the pilot alongside a UFO claimed the UFO resembled the fictional UFOs from the 1970s British TV show "UFO."

PolitiFact reached out to the show’s producer, Gerry Anderson, but we did not hear back. The Lackland Air Force Base also did not immediately respond to a request for comment.