As Americans face record-high gasoline prices hovering around $5 per gallon, many other nations have experienced even steeper costs at the pump.

But despite what several Instagram posts have claimed, gas in Canada did not skyrocket to as much as $9 per gallon at the start of summer.

The claim about the United States’ northern neighbor took off on Twitter June 11. "Gas in Canada is $9.00 a gallon," the tweet said. "It’s not (President Joe) Biden’s issue."

The viral tweet spread in the following days to Instagram, where a pair of posts shared screenshots of the tweet over photos of Biden. Those posts racked up more than 15,000 interactions, according to data from CrowdTangle, a social media insights tool.

"This tweet is going viral on Twitter. Do you blame Biden for the gas prices?" said the first of the two posts, which was uploaded June 17.

"Do y’all blame Biden for the gas prices or nah?" the second post said June 20. 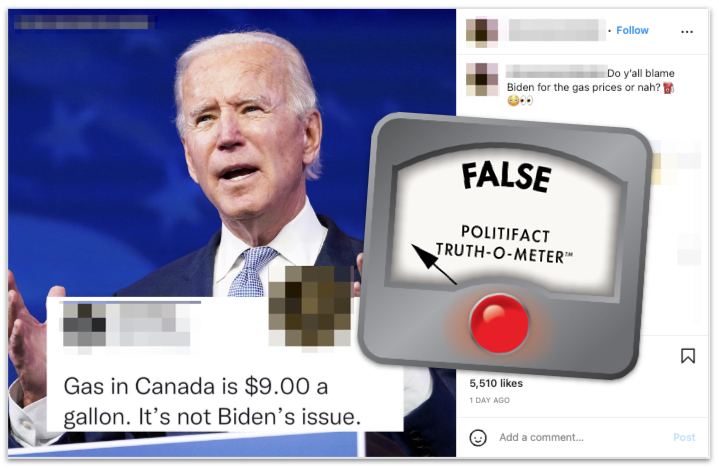 U.S. federal data show that for the week beginning June 13, the average weekly national gasoline price was about $5.01 per gallon. On June 22, the national average was at roughly $4.96 per gallon, according to the American Automobile Association.

Although the average price at the pump in Canada is higher than in the U.S., it is not as high as $9 per gallon — no matter if you measure it in U.S. or Canadian dollars.

According to the Canadian Automobile Association, the average gas price in Canada as of June 22 rounds to about $2.02 in Canadian dollars per liter, or about CA$7.66 per gallon. Factoring in the currency exchange rate, that translates to about $5.89 per gallon.

Organizations that track gas prices across countries, such as GasPetrolPrices.com, have also put the average price in Canada far below $9 per gallon. The website’s most recent calculations, for June 20, show the lowest average gas price was in Venezuela, at about 8 cents per gallon. The highest price at that time was in Hong Kong, at more than $11 per gallon.

Canadian gas prices weren’t near $9 per gallon around the time of the original June 11 tweet either, Snopes reported.

Factors such as taxes on gas, how reliant countries are on cars for transportation, and whether those countries produce their own oil play a role in cost fluctuations from one nation to the next. Gas prices across the globe have also surged because of sanctions on Russian energy, pandemic-related changes in supply and demand, and increasing oil costs.

PolitiFact, "No, Biden didn’t give Americans the ‘cheapest’ gas prices on Earth," June 6, 2022